May 22, 2007
On the morning of Sunday, May 20, I took my bicycle out of the basement storage room. It had been two years since I had used the bike. Both tires were flat. We used a hand pump to inflate both tires. A friend was to accompany me on the Hidden Gems Tour, but her bicycle was still in the shop. I was surprised that the repair would take a week. I should have taken this as a caution about my own bicycle. I arrived at Halcyon Commons, the starting point for the tour, several minutes after the start time of 10 a.m. I had not missed any of the introductions. Most of the riders were greeting folks they knew and meeting new people as well as purchasing the tour map. With a critical mass of riders, John Steere, one of the tour organizers, made welcome remarks. John spoke about the creation of Halcyon Commons, comparing it to San Pablo Park. He said that both parks had created communities. Other organizers spoke as well as the tour's cartographer, John Coveney. John Coveney described the hidden gems as "gifts to the street" and encouraged the riders to create their own hidden gems. 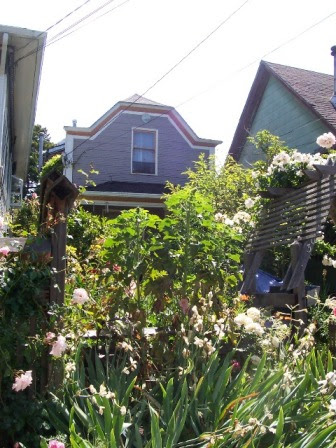 Halycon Commons was the first stop on the tour followed by the meditation garden at the Jewish temple on Prince Street. The next stops were the Doll House and the Magic Garden on Fulton Street. The Doll House is a narrow building of about 1200 square feet that shares a lot with a more standard width house. According to the tour leader, John Steere, the house was relocated for $1 following the 1920s fire in the North Berkeley hills. The Magic Garden is very magical with plant life made from ceramics, silverware, and bowling balls. 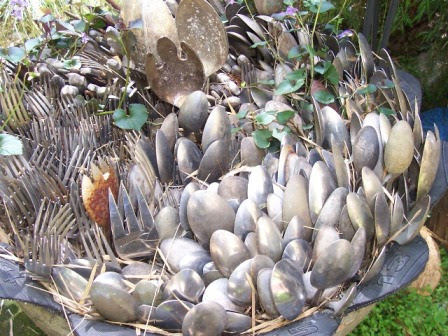 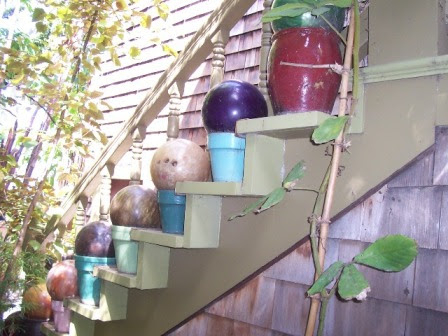 The group of approximately 65 viewed the magic garden in two shifts, then we rode en masse across Ashby Street to the traffic circle at Fulton and Russell. The circle is one of several in the Le Conte neighborhood that are gardened by neighbors. This one is planted as a coastal meadow while the one at Ellsworth and Russell - the next stop on the tour - was planned and designed as butterfly habitat to complement the butterfly garden located at the Le Conte School. The "adventure" part of the tour occurred at the next stop, which was the Buddhist Temple on Russell Street. As I gazed at the temple, I heard a bb-pop sound. I thought: "that is a bad sound." I looked back and saw that my rear tire had blown out. I phoned the tour leader to tell him of my problem. He encouraged me to fix the tire and join the group for lunch at San Pablo Park. I walked my bike to the bike shop on Stuart and Telegraph, but they are closed on Sundays. I walked my bike home, ate lunch, and thought about how to get my bike downtown. Wrongly assuming that only certain buses have bike racks, I did not go to the bus stop right away. After checking the AC Transit website, I learned that all buses are equipped with bike carriers. I rushed (as quickly as I could with a busted tire) to the bus stop. I caught a bus 15 minutes later. Of the bike shops downtown I chose Missing Link. It has always impressed me as a responsive shop. A staff person at the main building directed me to the repair shop on the east side of Shattuck. I also learned from this person that I should add air to my tires every three days. Adding air to completely flat tires after two years of no use was a poor idea! I received quick and courteous help at the repair shop; within 15 minutes, my bike was fixed. 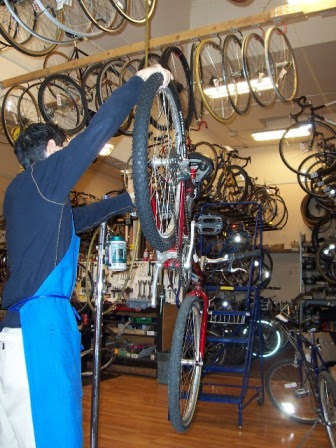 With a bike in good repair, I figured all I had to do was find the tour group. Easier said than done. I did not have the new tour map (I had left the old map at home). I could not get in touch with the tour guide. I biked around South Berkeley, using many of the city's bicycle boulevards. I did not find the group but I finally photographed a gem I like: the buildings at the corner of Dwight and MLK constructed with car parts. 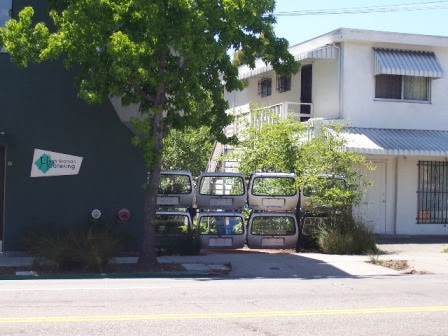 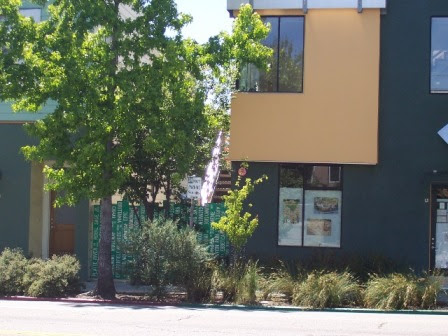 I received a phone call from the tour guide on Sunday evening. He had not received my voice message until the end of the tour. They left San Pablo Park at 12:30 (I was en route to the bike shop). The tour ended at 2:30 (I was locking my bike in front of Royale Grounds). This year's tour was a success. I hope to complete the route next year!