Nature making profiles is the signature project of local ecology. We have written three profiles, are working on a fourth, and are traveling to Toronto to see more. There are several styles of nature making. The sites we have profiled thus far (and the ones we are primarily interested in) were designed by neighborhood residents. These nature made sites are "introduced patches" (see Forman and Gordon, 1986) of intended ecological succession versus purely ecological infrastructure patches (like the California Academy of Sciences green roof) or traditional restorations of remnant "spontaneous nature" (Mozingo, 2007). 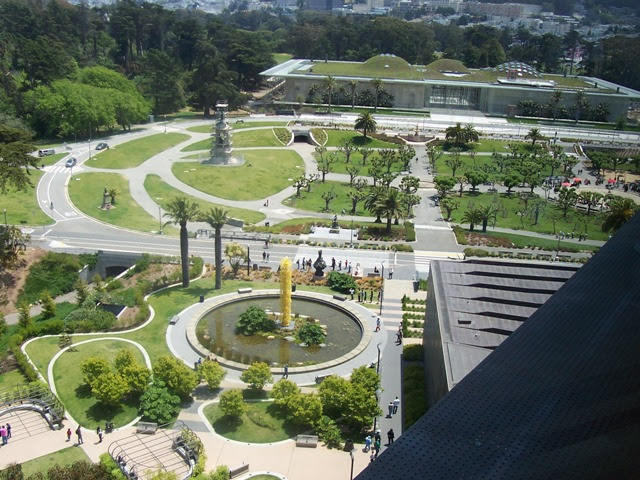 The roof is in the background of the photograph - note the rolling "hills." I saw the California Academy of Sciences green roof from the de Young Museum tower and from ground level. The roof's outline is impressive but the design details became obvious only after reviewing the Good magazine article about the roof. The roof is engineered to mimic the function of ground cover plant systems. This type of green roof is "extensive" and is characterized by shallow planting depths (versus "intensive" roofs with deep soil depths that can support shrubs and trees). Despite the shallow nature of the soil and the short layer of the plant material, the CAS green roof will intercept rainfall - keeping it out of storm drains - as well as regulate seasonal building temperature. 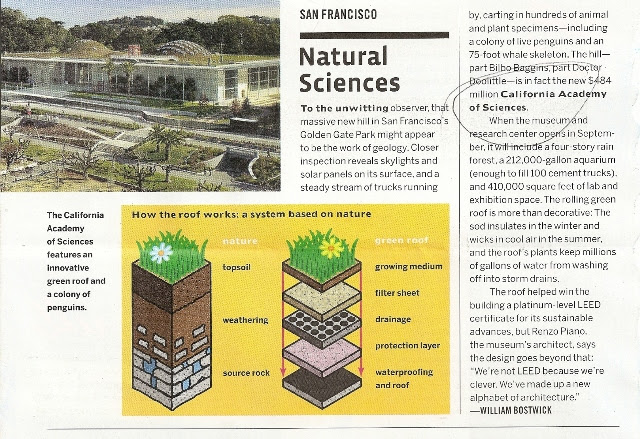 In a 14-month study of the rainfall interception rates of green roofs, Michigan State University researchers at the Green Roof Research Project observed that extensive roofs "retained 60.6% of rainfall from [83 experimental rainfall events] compared to 50.4% and 27.2% for the media-only and conventional gravel ballast roofs, respectively." I am always amazed by Berkeley's lack of rainfall interception landscapes and storm-water best management practices. My street floods during heavy rainfall and most of it flows into storm drains. EBMUD has implemented mandatory rationing this summer because of low precipitation levels this past winter. I think we did not do a good job of storing the rain we did receive. I am a renter so I cannot install a green roof, but if you are a house owner, consider installing, at least, an extensive green roof in combination with a rain barrel or cistern. For more information, visit the following Web sites: Nine Mile Run Rain Barrel Initiative; Best Management Practices for Low Impact Development; Low Impact Development - Stormwater - Rain Barrels & Cisterns; and Great Lakes WATER Institute Green Roof Project. For a local example of a small-scale green roof/living roof, visit the EcoHouse in the Westbrae neighborhood.