June 01, 2011
Landscape architect Hideo Sasaki's interdisciplinary approach to landscape design was well known and regarded.  The work of Sasaki and his firm "display[ed] exceptional harmony of architecture, landscape architecture and art," writes The Cultural Landscape Foundation.  Sasaki's studies at UC Berkeley in the 1940s were interrupted by an internment at the Poston War Relocation Center during World War II.  He later completed his landscape architecture studies at the University of Illinois and the Harvard Graduate School of Design.  Sasaki completed significant projects in the U.S. and one of his most famous landscapes in New York City is Greenacre Park.  Lists of his projects can be found here and here.  (The Sasaki firm now operates as Sasaki Associates, Inc.)

Sasaki designed another landscape in the city: the modernist 1.5 acre Garden for Washington Square Village (WSV).  The WSV complex of "1,292 apartments in two parallel tower slabs of two buildings each, enclosing a park over a 650-car underground garage" was opened in 1958. The buildings were purchased in 1964 by New York University (NYU) for faculty housing.  The WSV Garden, completed in 1959, is located between the two mid-rises.  Photographs of the site before and just after construction can be viewed in a wonderful report titled WSV Garden Rehabilitation Plan by Ellen Jouret-Epstein. The document also contains a thorough site history. 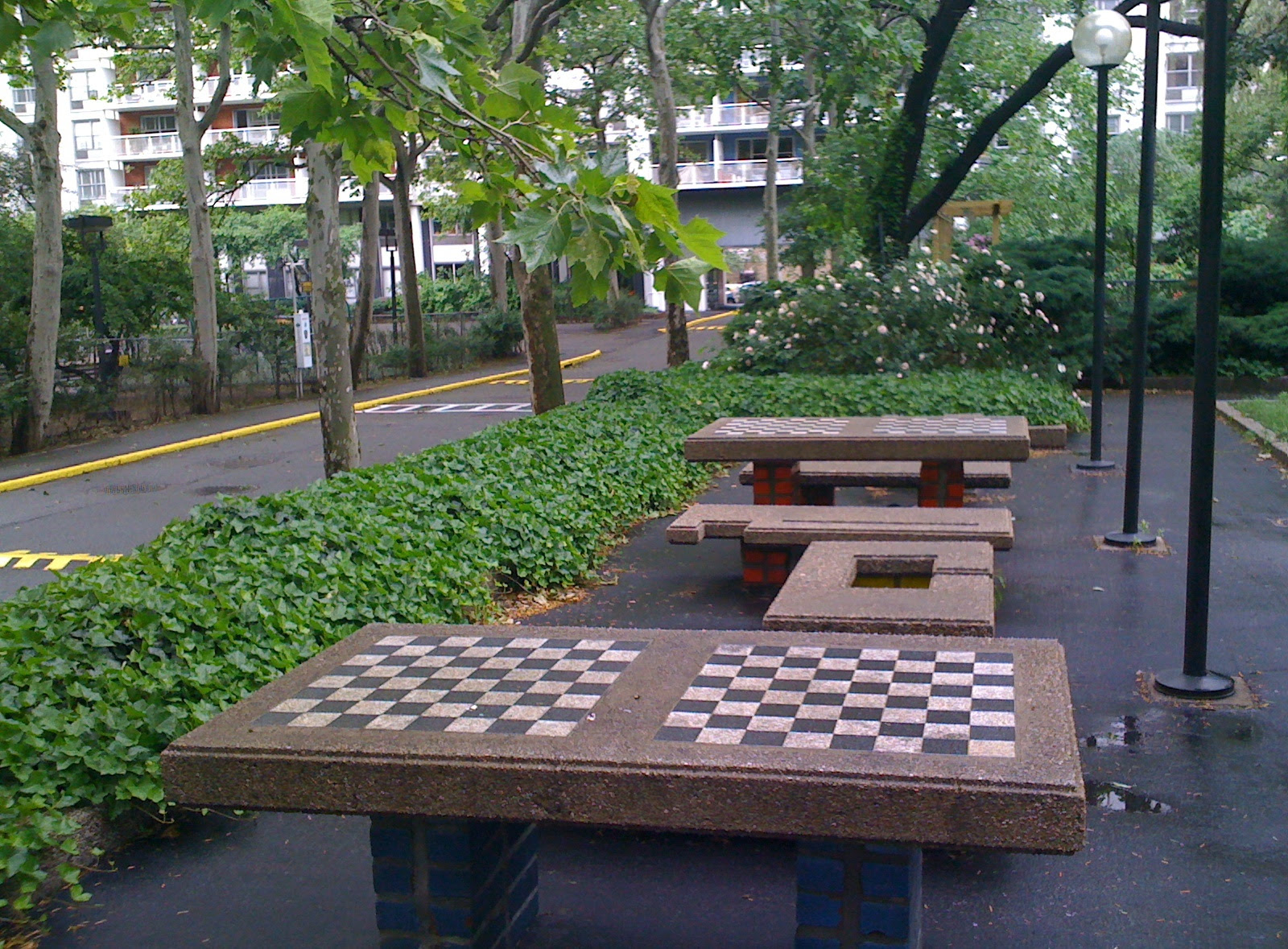 In its controversial NYU 2031 plan, the university proposes to eliminate the garden in order to build "two academic buildings and below-grade academic space" according to the NYU 2031 North Block Site Plan overview.  The residential courtyard atmosphere would be lost, replaced by a social quad for college students.  The plan also calls for "a single accessible open space" that can accommodate a range of uses such as "quiet contempla[tion]" to "active play."  (The latter is included because The Plan calls for the eventual elimination of a 20,000-plus square foot playground known as the NYU Key Park, open to NYU affiliates and community members within the NYU "catchment area."  (See pages 146-147 of Chapter 6 (The Core) of NYU 2031.))

We are regular users of the Sasaki-designed garden and even more now, knowing of its (proposed) fate.  It holds so much of interest for adults and children: water (fountain); shade and sun; places to sit and to climb; birds, ants, squirrels, and other wildlife; a seasonal palette of vegetation; other adults and children; and open and refuge areas.

The WSV Garden is a privately owned public open space is elevated because of the garage below.  It is accessible by several staircases and one ramp.  Because the garden is not at grade, passersby are deterred from using it.  It "reads" private.  There are no signs that encourage entering the garden.  But it is well used by those those who know its public nature.  It is a "nature-ful" alternative to area playgrounds.  Recently, I saw two older children teaching a younger child to swing from a tree branch.  (This type of behavior is prohibited in the garden, we learned recently, as the parent of a couple of the swinging children had a heated exchange with a staff person.)

Visit the garden!  And if you have photographs, share them at the local ecologist Facebook page, thank you.

Thank you to Andrew of WSVTA for the link to Ellen Jouret-Epstein's thesis.