This is not eclectic seating. It is an abandoned couch.

June 18, 2006
When I saw the green couch (below) at western end of my block, I thought I would write about eclectic seating in Berkeley's public landscape. But I abandoned that line of thought (for now) after a surprising discovery. When I turned the corner and walked one more block, I saw the missing cushions for the green couch (below). This discovery sparked two questions: (1) Did the owners put the couch curbside for municipal disposal and someone (well, at least two people) took the couch but abandoned it because it was too heavy? or (2) Did the owners place the couch a block away from their house because they knew the city would not dispose of such a large item? 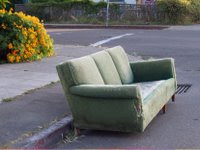 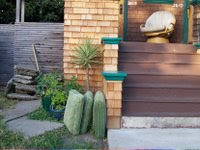