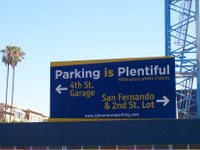 downtown San Jose, CA In French, "parking lot" is partially composed of the word "parc" that translates to public garden or park. Strange, non? Paul Groth has suggested that perhaps our parking lots are gardens while Randy Hester (1989) has developed the idea of the parking garden for a community design project along the Skagit River in Washington. Hester describes the idea as "an unusual juxtaposition of people and cars. A pedestrian promenade, water sculpture, and flowers are intermixed with traditional working class uses, such as viewing from and repairing automobiles."

Rebar, PARK(ing) Day 2005 Rebar, a self-described "creative collective," located in San Francisco, has been funded by the Trust for Public Land to develop a project called PARK(ing) Day. The action involves converting metered parking spaces into park spaces. This is a temporary intervention, lasting until the meter expires. The concept is based on "reclaiming the street for people," but parking also happens in enclosed spaces like parking garages. What are to be done about these spaces? Watch the PARK(ing) Day video.