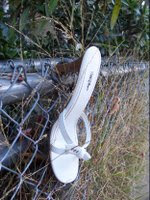 In 1999, Margaret Crawford co-edited a volume of essays titled Everyday Urbanism. In an essay in the volume, Crawford advances an argument about the blurred distinctions between public and private space as a result of actions associated with "everyday life." In particular, she describes the effects of two spaces, the garage sale and street vending. The garage sale and the space of street vending are more than physical spaces. According to Crawford, they are thirdspace, or "a space of representation, a space bearing the possibility of new meanings, a space activated through social action and the social imagination." (Read Eating, drinking, WiFiing at my local third places for another perspective on the idea of in-between space.) 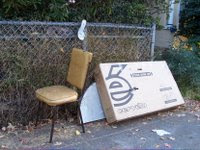 Yesterday, I came across a collection of four items: a chair, a broken table, an empty bicycle box, and a high-heeled shoe. I was immediately reminded of Crawford's photographs of garage sales and street vending in Los Angeles. The location of this collection is at the gate of the parcel on which my (rented) duplex sits. While I don't think this display falls within Crawford's classification, I do think it's a bit uncanny. Maria Kaika, writing in 2004, argues that the uncanny (out of the ordinary behavior or "the surfacing of things that oought to remain hidden") alerts us to the material and social connections between the seemingly separate public and private spheres of life. Not that discarded household items are uncommon on city sidewalks but the careful placement of the shoe...that threw me for a loop! (Read This is not eclectic seating. It is an abandoned couch.)