The idea of the "commons" 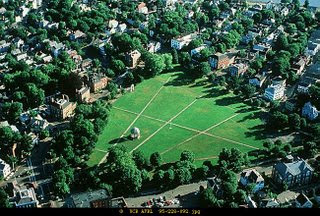 From the town common of Puritan New England towns to Berkeley's neighborhood commons designed by Karl Linn in the 1990s, the idea of "commons" has been practiced in our town and city landscapes. This post considers points of view and the practice of the commons. Let's first consider the "tragedy of the commons," famously, though erroneously defined, by Garret Hardin in 1968. According to Peluso (2006), the tragedy of the commons is really "the tragedy of open access," or non-exclusive access and use. Hardin proposed (state) centralized resource management or privatization. Critiques of Hardin's formulation redefine a common as a group of people directly involved in decision-making about a resource or landscape (see Elinor Ostrom (1990) Governing the Commons: The Evolution of Institutions for Collective Action).

The New England common was based on the idea of commons brought over from England. In the context of New England, this town space was used as pasture and for militia training among other things. The town common was also built in other cities like Philadelphia's Rittenhouse Square (originally Southwest Square) and Franklin Square (originally Northeast Square) were used for pasture and night soil dumping. Writing in 1944, Walter Firey argues that the preservation of the Boston Common in the high-value market of downtown Boston derives from the sacredness of the landscape, "its representation in peoples' minds as a symbol for collective sentiments." Writing fifty years later, Brian Donahue (1999, Reclaiming the Commons) concurs with Firey adding the idea of actual engagement with the land as the only way to know, care, and keep our landscapes. Donahue writes, To have a real commons was something more than enjoying a park, in other words, more than tossing a frisbee on the town green....We proposed to employ foresters and farmers, but they were to answer to a local board of citizens, the Conservation Commission. They were to employ local young people, and they were to produce food and firewood for local consumption. This struck me as constituting a modern commons, in the full sense of the word.

In a manifesto-article titled Reclaiming the Sacred Commons (1994), Karl Linn articulated a theory of the commons. He combined landscape architecture with social equity (based on his experiences in WWII Germany and later in Palestine) and proposed the idea of neighborhood commons as the modern reassertion of "indigenous or land-based cultures" connections to "living creatures and nature." In the 1960s, Linn co-founded the Neighborhood Renewal Corps in Philadelphia, the Neighborhood Commons Non-Profit Corporation in Washington D.C., and the Neighborhood Commons of Chicago. In the 1990s, he worked with residents and community-based organizations in Berkeley to design and build Peralta and Northside Community Gardens (combinations of food garden, flower garden, sitting area, play space).

Other resident-initiated green spaces in Berkeley have been inspired by Linn's model including Halcyon Commons. This green space ("grassroots-designed and built park"), located in South Berkeley, was once a 28-space parking lot. The impetus for the green space came during the June 1992 solstice block party made possible by a temporary street closing. Residents wondered what it would be like to have a park in the space. Beginning in October 1992, the Halcyon Neighborhood Association organized a community-based planning process to regenerate the site. At the end of a four-year process, the neighborhood association received project approval from the community and the city (the Parks and Recreation Commission, the City Council). The City helped to prepare the site by removing the surface pavement. The City also provided funding which was supplemented by local business and volunteer labor. The park was dedicated in July 1996 and is maintained by the Friends of Halcyon Commons.