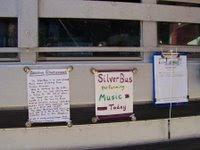 Silver, solar-powered, musical bus at Telegraph and Dwight, 10/8/06 Double-click on the image to read the text on the far left. In episode 318 of This American Life, a segment about a bad neighbor was accompanied by the song "I Got to Get Away" by Dave Parker. According to Jay Walljasper, guest editor of Terrain on "The Music of It All," Music, more than any other American art form or entertainment industry, truly reflects the rich geographic diversity of our country....Why is a sense of place usually an ingredient in the best music? That’s because great musicians...generally get their start by performing for hometown audiences, where they develop their skills and gain a following. The sighting of the musical bus, the special issue of Terrain, the airing of the neighbor segment on public radio as well as a posting on Walking Berkeley about entertainment fliers sparked an internet search for songs related to neighbor and neighborhood. Here are three titles. Say a prayer (for my neighbor)* by Saratoga Sound Ltd. Everybody has a neighbor* by Stereo Agency Won't you be my neighbor? recorded by separately by Roberta Flack and Jon Secada on the Mister Roger's album lyrics by Fred M. Rogers It's a beautiful day in this neighborhood, A beautiful day for a neighbor. Would you be mine? Could you be mine?... It's a neighborly day in this beauty wood, A neighborly day for a beauty. Would you be mine? Could you be mine?... I've always wanted to have a neighbor just like you. I've always wanted to live in a neighborhood with you. So, let's make the most of this beautiful day. Since we're together we might as well say: Would you be mine? Could you be mine? Won't you be my neighbor? Won't you please, Won't you please? Please won't you be my neighbor? *Free download at Amazon.com.