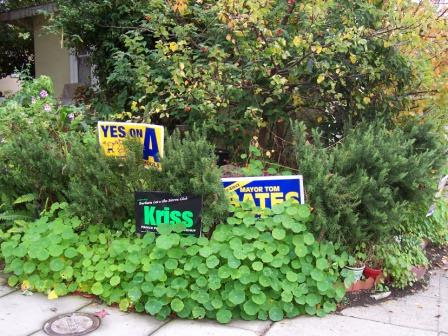 In Berkeley, Measure A, Kriss Worthington (District 7), and Mayor Bates were election winners on November 7. This news is 12 days old, but the photograph (above) was taken on Thursday, November 16, only 3 days ago. A review of local papers also tells us that election politics are still front and center. According to the 11/17 issue of the Berkeley Daily Planet, the votes for Richmond's next mayor are still being counted. The Daily Planet also reported on Oakland's proposed condo conversion policy (Berkeley's conversion policy was rejected). Today's SF Chronicle ran a feature on Nancy Pelosi's new relationship with the press as she transitions from California Senator to Speaker of the House. An election summary is available from the SF Chronicle.