Trees that made the headlines 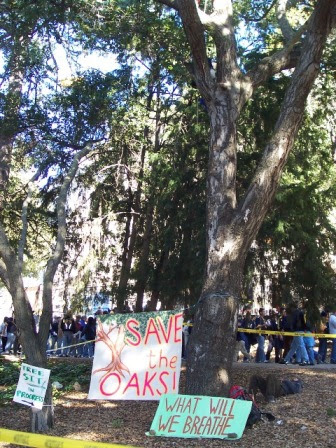 Although it is not a tree, the Presidio clarkia, is the latest plant species to become the center of controversy. Today's edition of the Oakland Tribune includes a story by Momo Chang about the endangered plant, located on a 1.28-acre sloping parcel in the Oakland Hills. A residential development project of four 3800 square-foot houses has been approved by the City Council. This decision met with resistance by community members. Apparently the parcel supports "10 percent of the world's known Presidio clarkia." Elsewhere in Oakland, municipal decisions have sparked community protest. Last year, proposed tree removals as part of the city's restoration plans for Lake Merritt met with criticism. I wrote about this in September 2006. Earlier this week, the Berkeley Daily Planet published another article on the Save the Oaks protest in northeast Berkeley. The University of California has proposed the removal of a grove of trees including 38 live oaks to accommodate a seismic retrofit of and expansion to its 82-year old football stadium. (See Daily Planet, 12.15-18.2006, "Tree protestors cited, banned from campus; 10.17-19.2006, "UC plans to raze senior oaks to make way for the stadium.") Tree conflicts made the news in other parts of the country, including Los Angeles and Miami. The City Council of Los Angeles has recommended that as palms die, they be replaced with Southern California natives like sycamores. While the city cites prohibitive costs and liability from falling fronds, other L.A. residents claim that the palm represents Los Angeles - it is "physical evidence that Los Angeles is the right place to be" (see The New York Times, 11.26.2006, "City says its urban jungle has little room for palms" by Jennifer Steinhauer). While San Francisco has been planting palms especially along the redeveloped Octavia Boulevard, Miami has been removing its palms along Biscayne Boulevard. In addition to factors of cost of liability, the claim made by officials in Los Angeles, the City of Miami has an ecological argument : palm trees do not provide shade, but live oaks, the replacement trees, do. Miami's palm advocates argue that historic and cultural values should be considered in evaluating the contributions of the city's palm trees. (See The New York Times, 01.22.2006, "A Miami emblem is sacrificed for shade.") Of course, San Francisco is not without tree troubles. Even if you have not seen the movie The Wild Parrots of Telegraph Hill, you might be familiar with the Telegraph Hill parrots. In the fall of 2005, one year after the movie's release, one of the Monterey cypresses in which the wild parrots nested was removed by the owner of the parcel on which the tree sat. The San Francisco Chronicle published an article about the tree removal (possibly improper) and the responses by community members (upset) and the city (concerned). I have not located subsequent newspaper articles on the parrots or their nesting sites, but a petition is posted online.