Urban trees and the Giraffa camelopardalis

January 22, 2007
I have worked as an urban forester, managing street-tree planting contracts; a community forester, co-directing a youth urban ecology program; and an arborist, all in Boston. I received my Massachusetts arborist certification in 2002, after successfully completing an exam which included included a tree identification section. One of the places where I developed my identification skills was the Arnold Arboretum in the Jamaica Plain neighborhood of Boston. The Arboretum's collection is extensive - 7,082 individual plants on 265 acres. The trees of the Arboretum are well catalogued which made it a great place to study. I also developed my identification skills on the job - visiting nurseries to select street and park trees, working with youth and community groups on street tree inventories, and monitoring the health of street trees during the contractual maintenance period. Along the way I discovered some amazing tree places like majestic ginkgos (Ginkgo biloba) on Tonawanda Street in Dorchester and American elms (Ulmus americana) on a quiet street near Constitution Beach in East Boston. An East Boston resident nominated one of the Constitution Beach elms for the 2004 tree contest. This 43-inch elm was one of the finalists in the diameter category. The Christian Science Plaza in the Back Bay has a small grove of tulip trees (Liriodendron tulipifera), so named because the flowers of the tree resemble tulips. Other tree places were closer to home. I lived in three of Boston’s twenty neighborhoods. When I lived in Mission Hill, I would walk along the Southwest Corridor Park, a five-mile linear park. In the late 1960s, the State of Massachusetts acquired and assembled, via eminent domain, land for an eight-lane interstate highway. The park is the culmination of two decades of community protest, activism, and planning. London plane trees (Platanus acerifolia) line the park’s pedestrian path near my apartment. In Jamaica Plain, I lived three blocks from Jamaica Pond, part of the Olmsted-designed Emerald Necklace. Olmsted developed an extensive tree list for the Emerald Necklace parks, and as a result, there is a wide variety of trees located around the pond. There are European and American beeches (Fagus species), willows (Salix species) as well as the red and pin oaks (Quercus rubra, Q. palustris) lining The Jamaicaway. Some oaks, like Monterey (planted in Austin, Texas) and Laurel oaks (planted in Georgia), are classified as semi-evergreen. This might explain why the red oaks are among the last deciduous trees to drop their leaves in Boston. 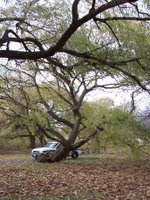 Willow trees, Back Bay Fens I also lived in the Fenway, home of Fenway Park, the Red Sox, and the Back Bay Fens, another Olmsted-designed park. Of the many trees in the neighborhood, I have a particular fondness for an old willow tree on Agassiz Road between Park Drive and The Fenway. I had my first tree climbing lesson in that willow. I also helped the tree warden (also a certified arborist) to collect branches from the willow for a sick giraffe at the Franklin Park Zoo. Of the various species fed to the giraffe, the willow was the preferred species. The extract of the white willow (Salix alba) bark, salicin, is the basis of aspirin. As a reward for delivering the willow branches, the warden and I were allowed into the giraffes’ pen and unto the feeding galley. This was an incredible experience for me - the giraffe is my favorite animal. For information on local willows, read Ron Sullivan's Berkeley Daily Planet article titled "Green neighbors: the endless usefulness of willows."