March 15, 2007
I noticed it a few days ago: the Walgreens sign on Bancroft at Telegraph. 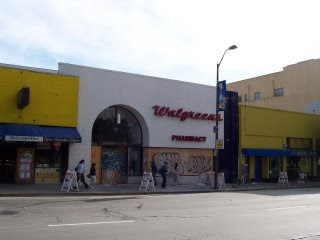 I have been following the retrofit of the old Gap into a Walgreens and the closing of the Rexall Drugs with sadness and surprise. The old Rexall is being converted to Fred's Market (now located on lower Telegraph). This seemed to happen very quickly given the fact that other storefronts on Telegraph remain empty (like the old Cody's). However, a friend pointed out that the central location of the old Gap storefront is a driving factor. Bancroft at Telegraph is a 100% corner! Furthermore, the old Gap store has two front doors giving it a presence on these two major roads. 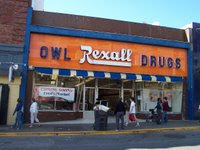 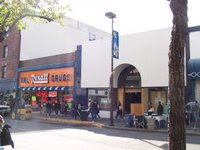 The Gap offered clothing at affordable prices which is probably why it went out of business. One could argue that this affordability came at a cost: the clothing is not made in the U.S. and international workers do not have the same level of labor protections as U.S. workers. Across the street from the old Gap is an American Apparel store. I like the company's practices: its clothing is made in the U.S. (Los Angeles) and workers earn fair wages (see the American Apparel website for more details), but I cannot afford the clothing. I have made one purchase at the store - during a sale. I window shop the rest of the time. This post is the first in a series titled in Made in Berkeley.