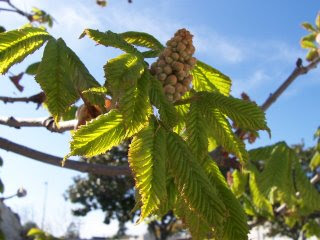 Horsechestnut blossom, eastern Shattuck between Russell and Stuart Spring officially arrived on March 21 (the spring equinox). But I know spring is here because the horsechestnuts (Aesculus hippocastanum) are blossoming. I am from the East Coast where leafing and blooming horsechestnuts, on the streets and in parks, are signs of spring! Berkeley's blooms might not be a true sign of spring but a premature response to a warm winter. A horse-chestnut in blossom is a candelabra of the gods. The branches swoop up, then down, then up again at the ends. The sticky, shiny buds-among the largest of any tree buds-look ready to burst even in winter. As spring approaches, they virtually explode. In a few short weeks, the terminal buds (those at the branch tips) produce hundreds of upright floral cones, as bright as torches against a massive green background (from Arthur Plotnick, The Urban Tree Book, 2000, 241-242). 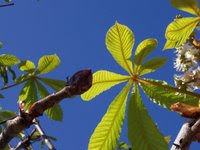 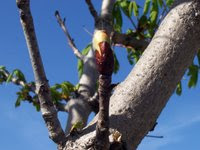 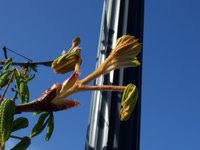 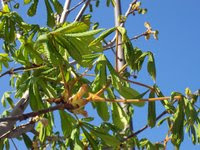