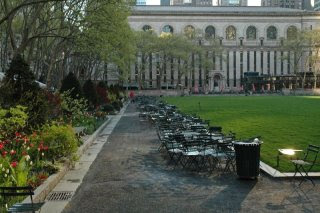 Permission is granted to copy, distribute and/or modify this document under the terms of the GNU Free Documentation License, Version 1.2 or any later version published by the Free Software Foundation. The Project for Public Space (PPS) was intimately involved in Bryant Park's "turn around" in the 1980s. Bryant Park is featured on the organization's Great Public Spaces list, but the park has lost some of its lustre. In a recent PPS article titled "When bad things happen to good parks," the park has been re-evaluated and placed in the organization's "Hall of Shame. " The article points the finger at privatization. Ironically, private enterprise, albeit more local in nature, and a public-private partnership were two of the elements that PPS highlighted in its original appraisal of the park: "The park's center is a three-acre open green surrounded by tall, arching trees. Kiosks at its northwest corner offer coffee and light meals, and directly behind the library on the east side is Bryant Park Grill, an indoor restaurant with outdoor and roof-deck dining. More than 1000 lightweight chairs can be moved throughout the park during good weather...." "The park is managed by the Bryant Park Restoration Corporation is an innovative organization responsible for a multitude of park activities and events, as well as ongoing security, maintenance, and marketing...." If the integrity of Bryant Park's public-ness is to be recaptured, it will require more than wayfinding kiosks and movable chairs (two major elements of the park's redesign in the 1980s). We need to remember that our municipal parks function as soapboxes and represent the legacy of the public provision of open space begun in the nineteenth century.