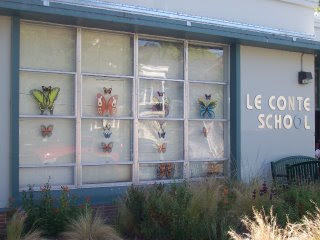 I live in the Le Conte neighborhood of Berkeley. The neighborhood has many traffic circles that have been planted by neighbors. One of my favorite circles is the butterfly habitat at Ellsworth and Russell which extends to the Le Conte School Butterfly Garden. It seems apt that a school would have a public garden (one might go so far as to say a park) because schools and parks are the quintessential public services. The U.S. was "the first Western industrialized nation to establish public schools" (Noguera, 1994). It was also the first country to provide wholesale public parks. (European countries had public parks but these were often converted private estates and grounds.) Noguera also writes that vis a vis school choice, the U.S. is attempting to "replace [traditional public schools] with new models, many of which are largely undefined and untested." The arguments about school choice chronicled by Noguera and others seem applicable to nature making in Pittsburgh, Pennsylvania. Last fall, the Pittsburgh Mayor's Office and several other collaborators sponsored the Pittsburgh Green Forum, a planning meeting for vacant land revitalization in the city. According to the draft report, the forum would "help [Pittsburgh] understand the realm of possibilities" when structuring its vacant land greening strategy. To this effect, the authors (Heinz School of Public Policy) of Vacant to Vibrant proposed a greening hierarchy ranging from short-term stabilization approaches like former Mayor O'Connor's Redd-Up campaign (to "clean up" the city for the 2006 MLB All-Star Game) and community gardens to longer-term strategies like parks and recreation areas, "green enterprises" (markert gardens, urban farms, or bioremediation sites), and "green infrastructure" projects (greenways and conservation sites). In the summer of 2001, I worked with seven groups in New Haven to develop community green spaces. One group - the Ivy Narrow Bird Preserve - inspires my ongoing research on neighborhood green spaces designed according to ecological succession principles. The organization I worked with in New Haven is called Urban Resources Initiative (URI). New Haven URI was established in 1994, several years after the founding of Baltimore URI. New Haven URI and its green spaces, including the Ivy Narrow Bird Preserve, are "pioneers." Pittsurgh is a recent arrival, benefiting from the experiences of New Haven and other northeast urban ecology nonprofits, but the the potential breadth of greening strategies suggests that the city is also engaging in an experiment in open space choice.