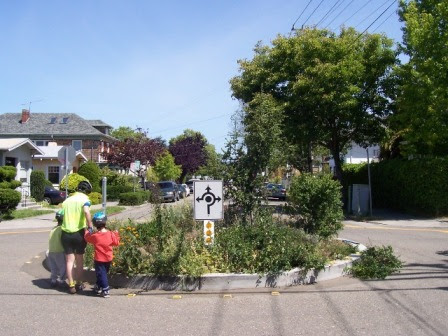 Both Michael Pollan and Peter del Tredichi have used the garden colloquialism "nature abhors a garden." I don't know what Michael Pollan says about the phrase (I have not read Second Nature: A Gardener's Education), but Peter Del Tredici writes, "gardening is essentially about humans controlling - even disregarding - the successional process to produce specific aesthetic effects, while ecology is about natural selection controlling plant succession based on the principle of survival of the fittest....We cannot mimic nature in our gardens because nature is a process, not a product." Maybe so, but some urban gardens are tended with natural processes in mind. For example, the California coastal meadow planted in the traffic circle at Fulton and Russell in South Berkeley (photograph above). According to Robin, the neighbor and historical landscape ecologist who tends the meadow, the oak in the centre of the circle was planted as an acorn. The meadow palette also includes poppy, California fuschia, lupine, ceanothus, and native grasses.