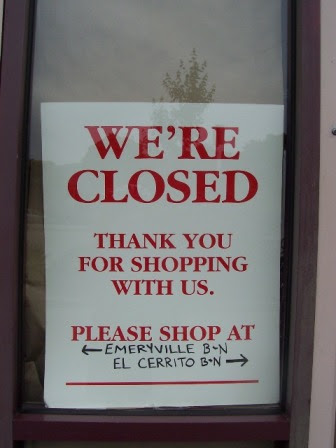 Eddie Bauer closed before I moved to Berkeley but the empy store windows still bear the company's name. The Gap closed last fall and is being replaced with a Walgreens. The latest chain store closure in Berkeley is the Barnes & Noble on Shattuck at Bancroft. 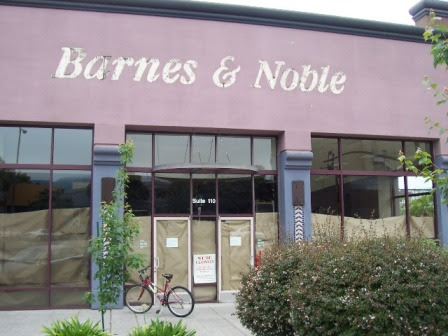 I biked there this morning hoping to find Alafair Burke's latest detective novel (the independent shops in my neighborhood do not have her books in stock). In March, Jen of the Walking Berkeley blog, posted on the store's "imminent closure," but I must admit, I was doubtful. It seemed more likely that one of our independent booksellers would close (as Cody's on Telegraph did) than the giant chain. Anyway, I was surprised to find the store's windows covered in brown paper. I went across the street to one of my favorite local book shops, Pegasus, and purchased a different book, using my trade credit and earning frequent reader points. After completing several other errands, I returned to Barnes & Noble and took the two photographs used in this post. As I prepared to leave, I heard a couple passing by say, "They closed?! Oh wow!" 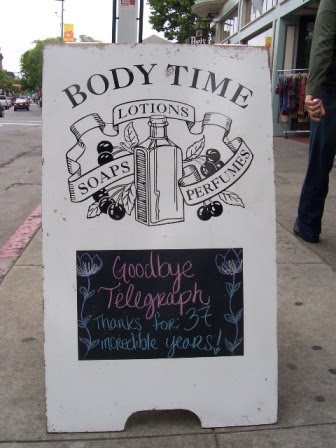 After 37 years, another favorite local business, Body Time, is closing its Telegraph Avenue location later this month. The shop girl told me there were other locations (Shattuck at Berkeley Way is the closest) but the news of their closing saddened me anyway. I like to shop locally, that is, in my neighborhood. I also enjoy the diversity of shops along Telegraph Avenue. I have not been satisfied with a few of the replacement businesses on the street, but an active storefront is preferably to a (long-standing) empty one. (Right?)