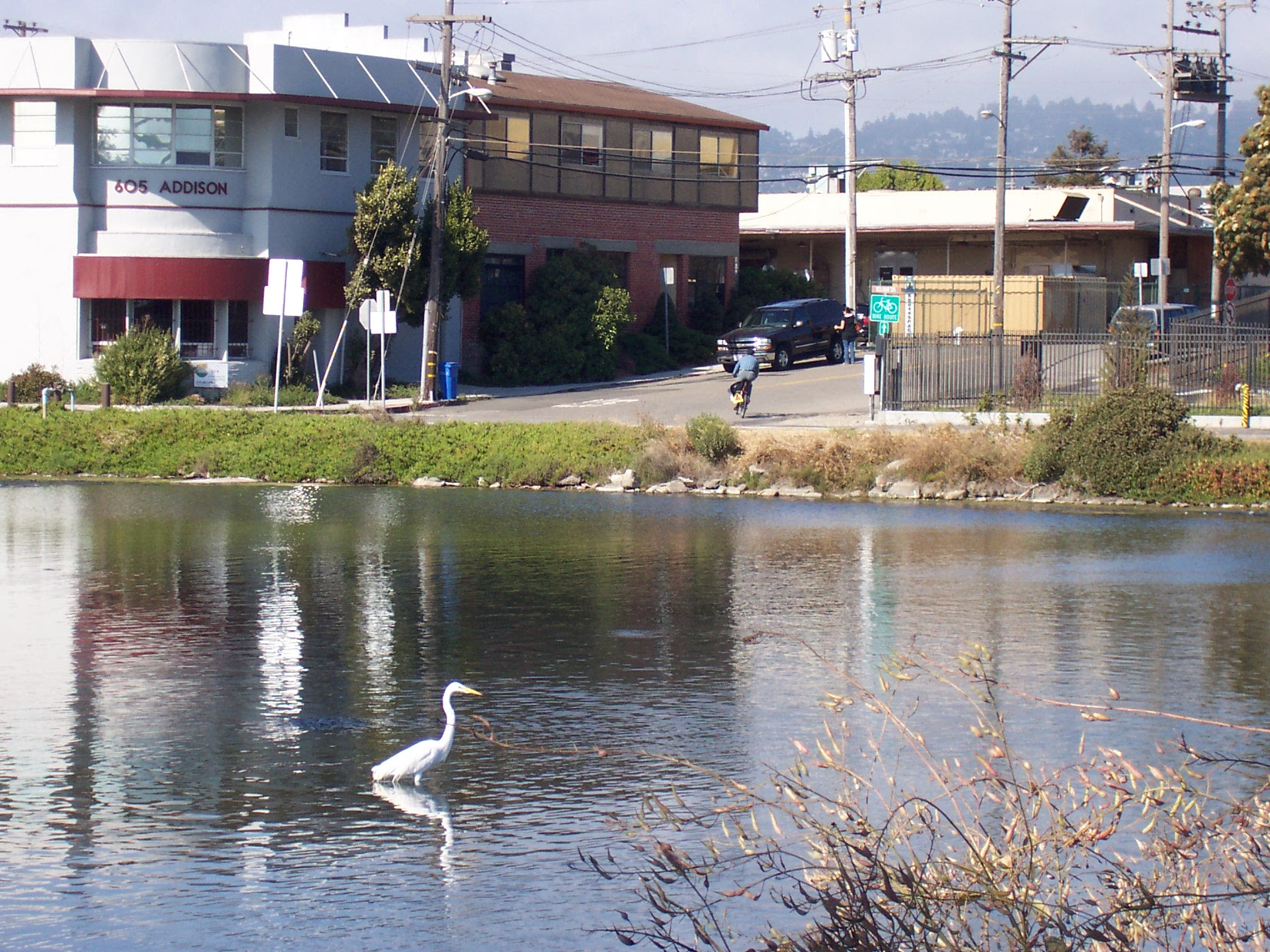 Northern end of main lagoon July 9 marked only my second visit to Aquatic Park. At 32.76 land acres and 67.7 water acres, the park is Berkeley's largest city-owned park. My first visit involved a cursory look at the "middle lagoon" through a car window. I had a more thorough tour of the middle lagoon on Tuesday, guided by Mark Liolios of Aquatic Park Environmental Greening, Restoration, and Education Team (Aquatic Park EGRET). As we walked the perimeter of the middle lagoon, Mark pointed out cultural and ecological features of the park as well as EGRET's current projects. 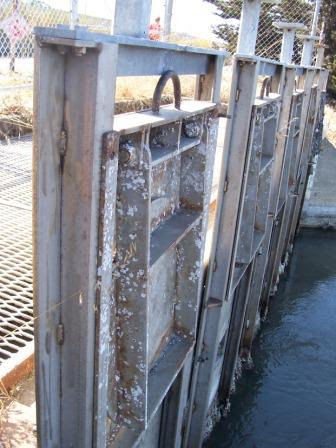 Western edge of main lagoon The road that currently separates the main lagoon from the middle lagoon was once the site of boardwalk from which model sailboat racers would monitor their boats. (I do not know when the boardwalk was removed.) Prior to the development of the site as a park under the Works Progress Administration, the eastern edge of the park was the bay's shoreline. All three lagoons are connected to the bay via pipes and gates. 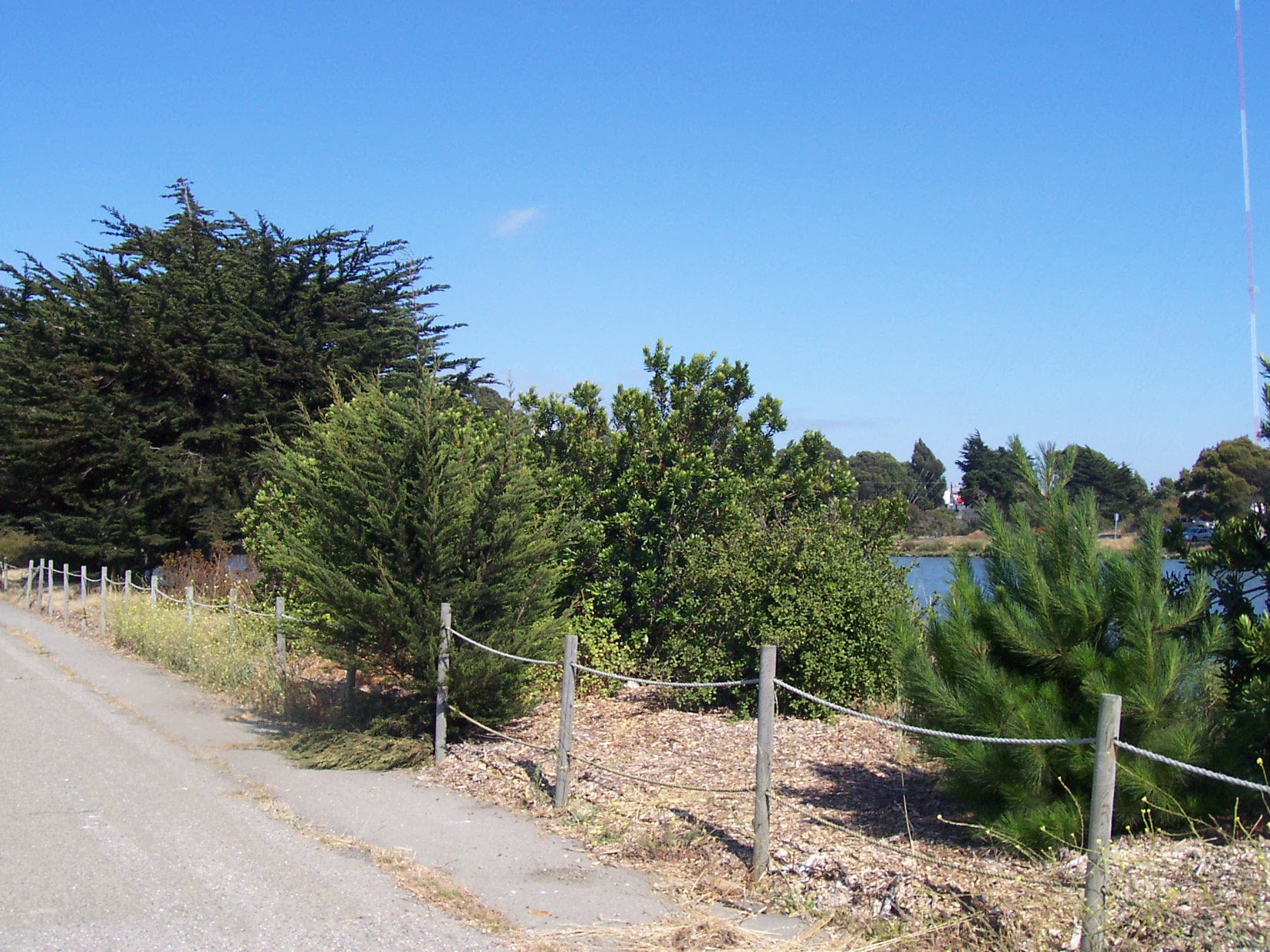 Vegetation along roadway separating the lagoons; middle lagoon on the right EGRET was preceded by Friends of Aquatic Park. The friends-of group coalesced in 1963 to prevent a business park infill project. The group was also involved in the development of the bicycle/pedestrian bridge across I80 and the Dream Land for Kids playground. 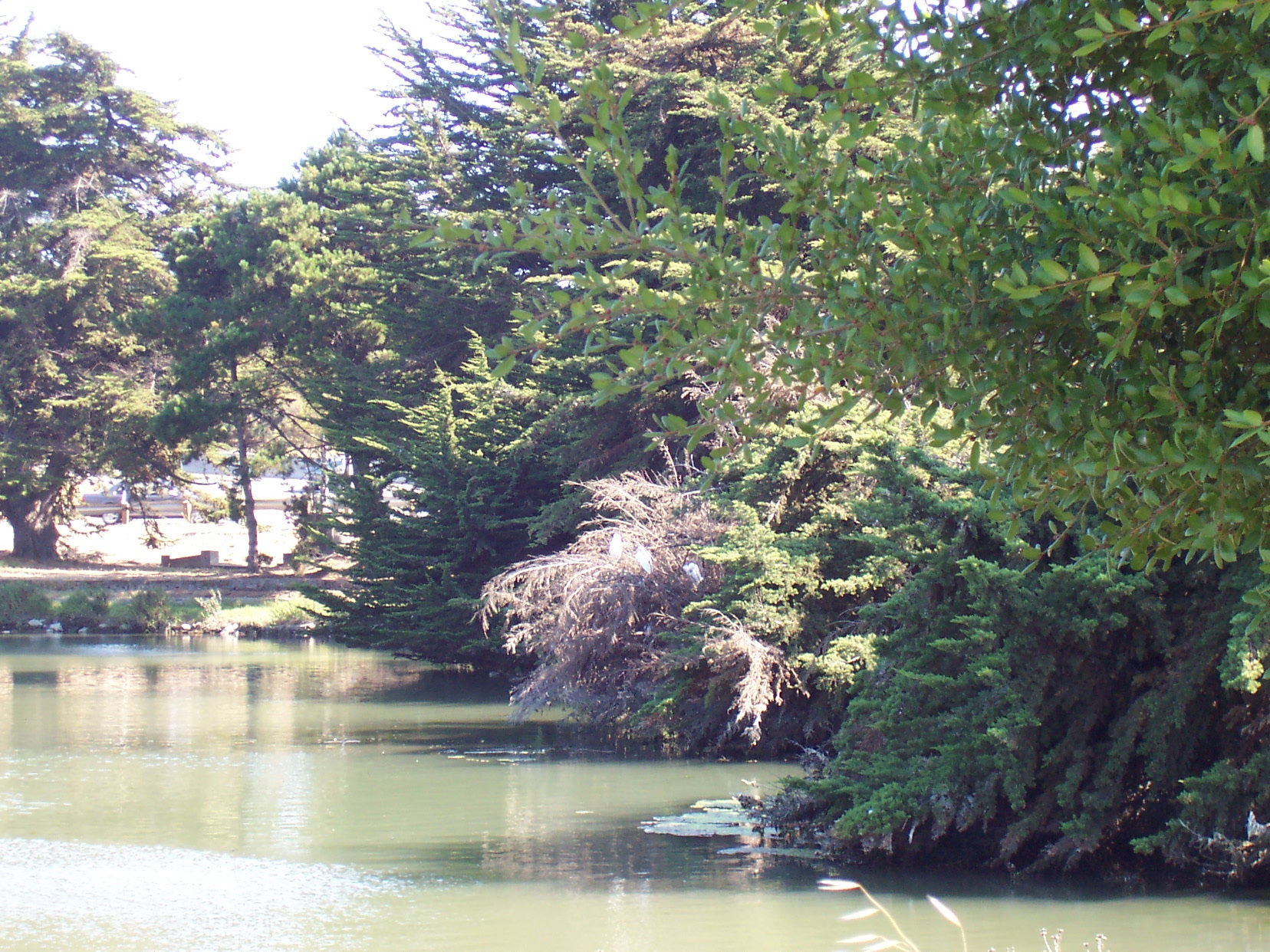 Cypress overhanging middle lagoon (egrets perched on dead branches) Seven years ago, the City of Berkeley received a state grant to plant native vegetation along both sides of the roadway separating the main and middle lagoons. (Laurel Marcus and Associates was the project consultant.) Post-project maintenance was rudimentary and EGRET began stewarding the site. The group was awarded two mini-grants which they used to vegetate the rotary and to install three benches, on the south side of the main lagoon and the north side of the middle lagoon. Other projects include planting shrubs to buffer feeding shorebirds from trail users and incidentally to provide songbird habitat. Recently, EGRET and a group of 4th graders planted replacement Monterey cypress, the preferred roost species of egrets and herons. 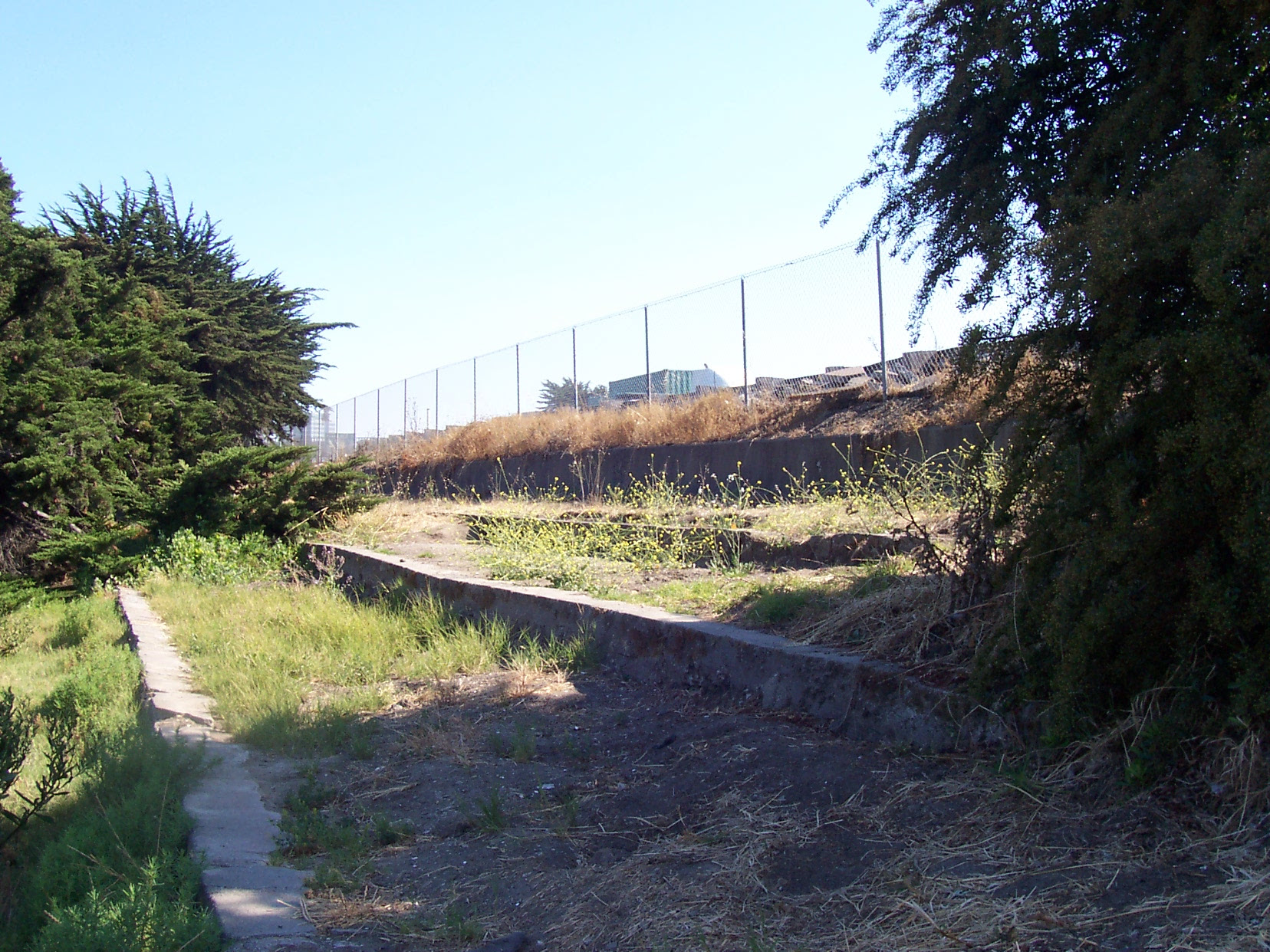 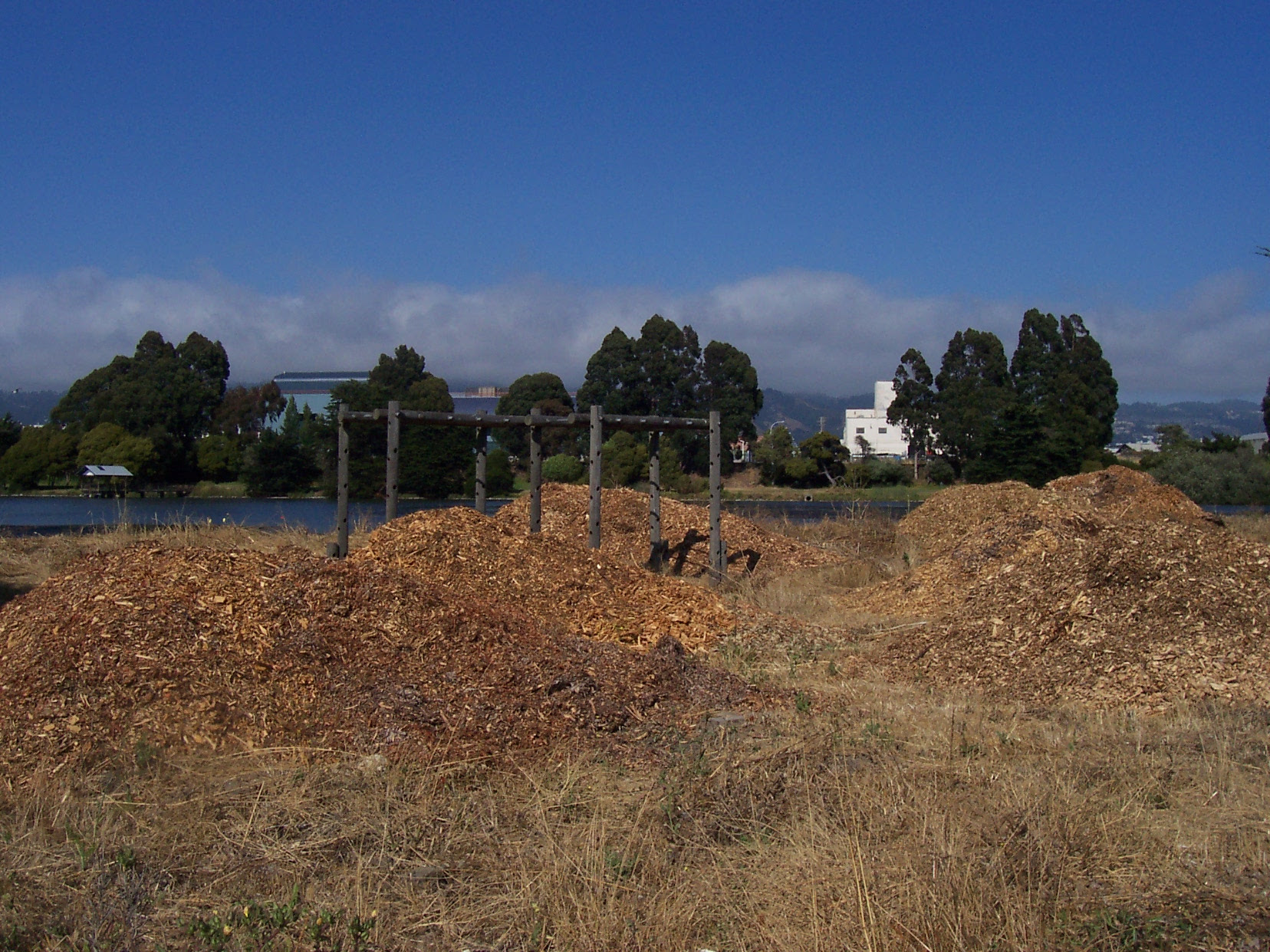 Weeding and mulching are part of the EGRET's restoration toolkit. The city provides large piles of mulch. Initially the City only provided enough material to mulch two to three inches. EGRET asked for more material; the group applies six inches of mulch. As this thick layer of mulch decomposes it release nutrients into the soil and it dramatically slows soil dessication. While the park is a great place to watch birds, walk, bike, and play, there are some challenges. Drivers park within the root zone of trees; tree pruning is inappropriately implemented (I saw many snapped branches); the park lacks appropriate signage (the current welcome sign does not note the name of the park and there are few wayfinding signs to the park and within the park); the parkland behind the cabin is used as a storage facility; and the western trail is only separated from the highway by a chain-link fence. The City is the potential recipient of $2 million (PROP 50) from the Coastal Conservancy for a Aquatic Park improvement plan. An environmental review under CEQA must be completed before the funding is released. The review is currently underway and is expected to be completed in 2008. 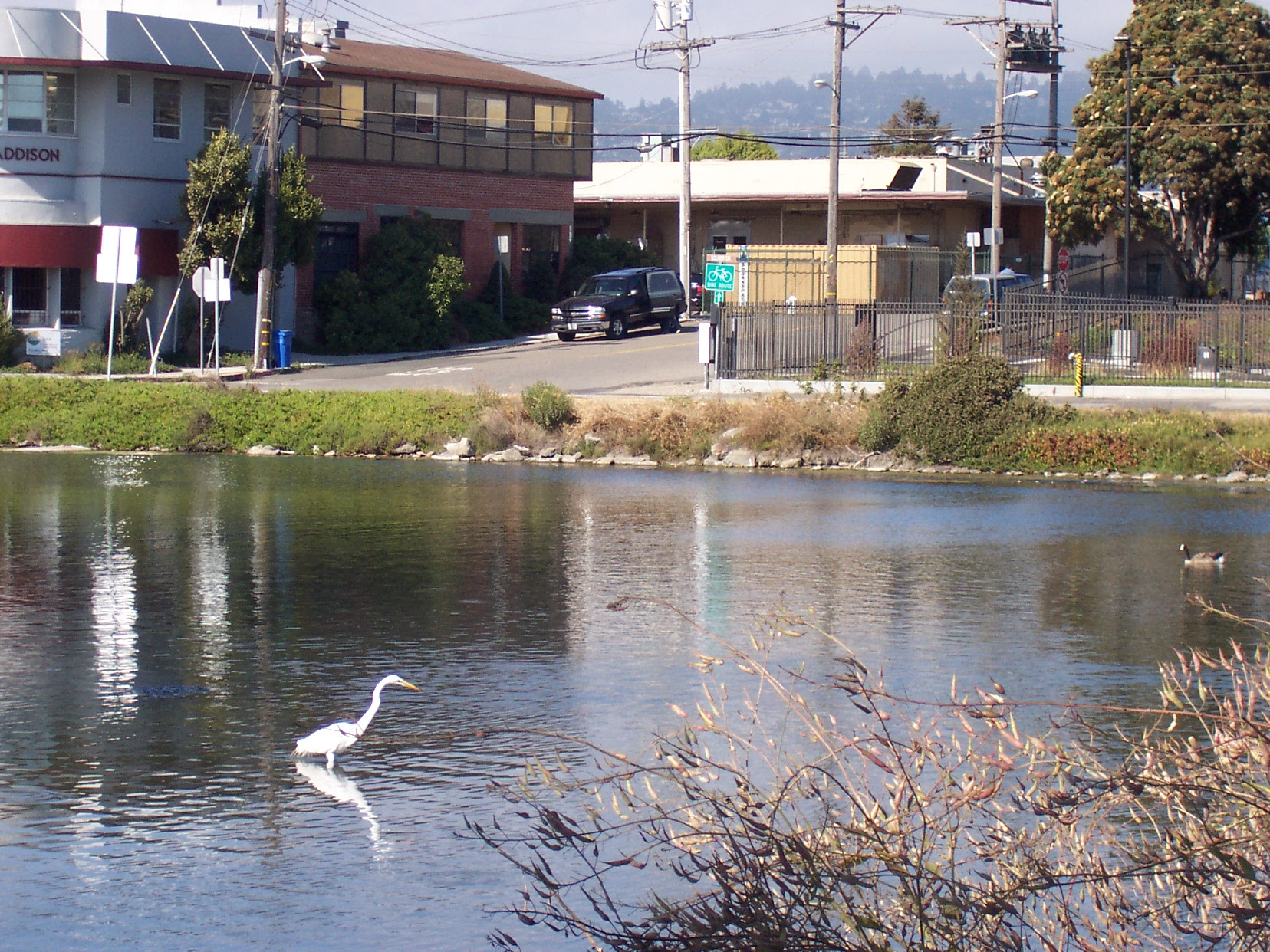 I learned that the the black-crowned night herons like to roost in the willows south of the middle lagoon, the egrets like the trees behind the cabin, and the snowy egrets like the western edge of the middle lagoon. I observed egrets wading and perched in the middle lagoon but it was only on my departure that I saw one stalking. (A tip from Mark Liolios: If you are close to an egret, do not stare directly at it. Instead, turn your back to it, then slowly look over your shoulder.) Sources - Tour with Mark Liolios - Wikipedia entry - See links within post