August 13, 2007
Before I begin the body of this post, I must offer a disclaimer. I did not participate in this past weekend's Art Deco Tour led by the Art Deco Society. I am currently unemployed and practicing frugality (the tour fee was ten dollars). Fortunately, the Daily Planet listed of some of the tour sites.I created my own tour which is the subject of this post. I am not an architect so the post does not contain professional architectural analysis for any of the buildings. However, I do provide information about the buildings from Berkeley Landmarks: An Illustrated Guide to Berkeley, California's Architectural Heritage (2001) by Susan Dinkelspiel Cerny. The first building on my tour was the Center for Buddhist Education on Durant and Fulton. The Center occupies the former Howard Automobile Company. I like this building a lot. The colors and facade details are well executed. The building is the best feature of this intersection otherwise occupied by a gas station, parking lot, and a bland apartment building. The Howard Company began in Oakland in 1913 selling Buicks before moving into Frederick Reimer's designed building in 1930. Architectural details included a trussed roof and scroll-topped pylons. 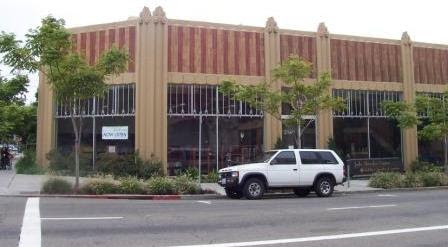 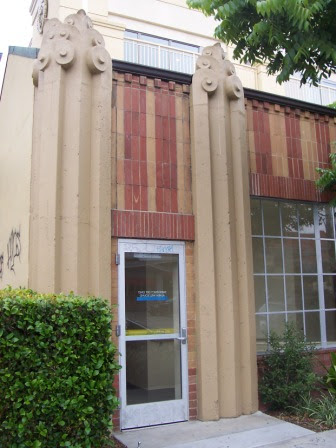 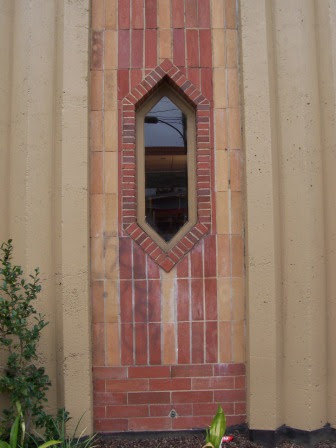 From the Buddhist Center I walked to the California Theatre on Kittredge. I have a Reel Video membership but enjoy watching movies on the big screen. I saw a movie at the Cal once. I have seen more films at the UA Theatre and Shattuck Cinemas, also Art Deco buildings. The Cal received landmark status in 1994, but it not listed in Berkeley Landmarks. 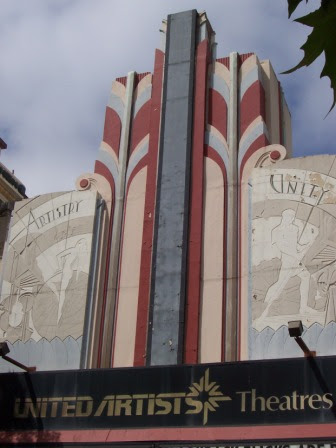 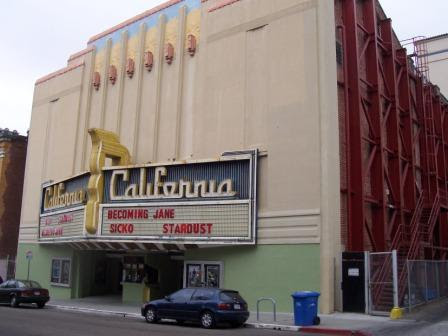 My next stop was the UC Printing Plant on Oxford at Centre Street. The building face on Centre is dull with the exception of the block glass windows. The facade is more lively on Oxford but there is no reason to stop and look...up.The building is landmarked (it is also not listed in the landmarks book) but it will be demolished and replaced by UC Berkeley's new art museum. Before the building is demolished, an art project will be staged at the site. The art collective, Rebar, is a potential project partner. 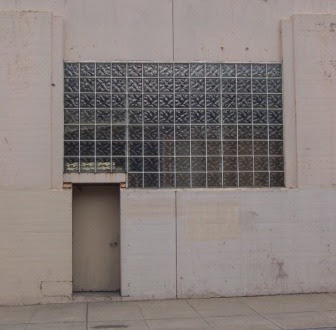 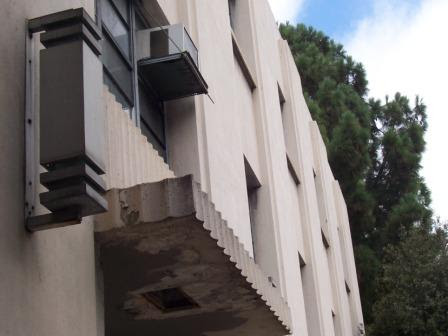 From the printing plant I walked to Half Price Books on Shattuck located in the former Kress Building. S.H. Kress hired Edward F. Sibbert in 1930 and Sibbert completed Berkeley's Kress dime store in 1932. Design details include terra-cotta ornamentation. Earlier this year I purchased a copy of A Thoreau Gazetteer (1970) by Robert F. Stowell and edited by William L. Howarth at Half Price Books. I am happy with my purchase; the book is filled with maps of Thoreau's travels in Mass., New Hampshire, Maine, Minnesota, and Canada. 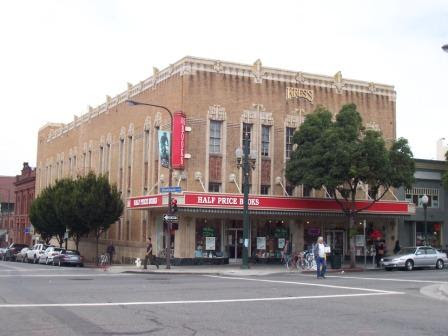 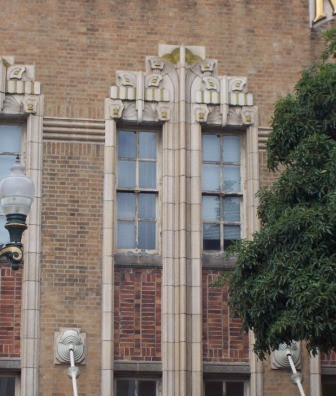 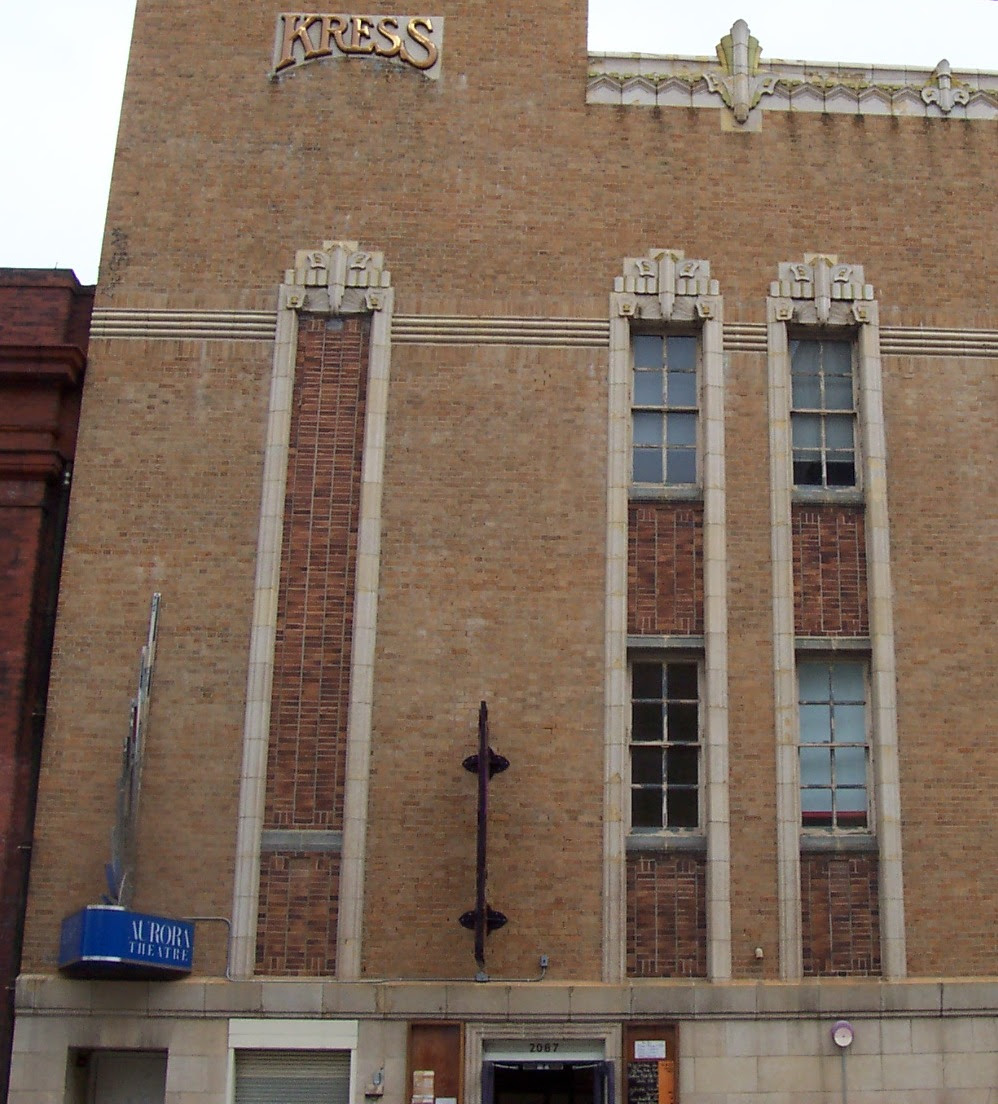 The next stop on my tour was the MLK, Jr. Civic Center which is housed in the former Farm Credit Building. It is remarkable that the Berkeley Farmers' Market is held adjacent to an old farm building and a civic center! The civic center building abuts Civic Center Park and Fountain. Cerny (2001) writes that the park is "an expression of the City Beautiful movement, which emphasized the creation of parks and public amenities as a way to beautify communities and inspire public-minded behavior." The design team was composed of Henry Gutterson, Bernard Maybeck, Julia Morgan, and landscape architect John Gregg. Cerny describes the fountain as Moderne. The design of the fountain is presumed to be based on the Fountain of Western Waters at the 1939 Golden Gate International Exposition. The Berkeley fountain now stands dry. I am not sure why the fountain is inactive (Cerny writes that the pumps don't work but an original pump is in storage), but EBMUD is still urging customer to conserve water. 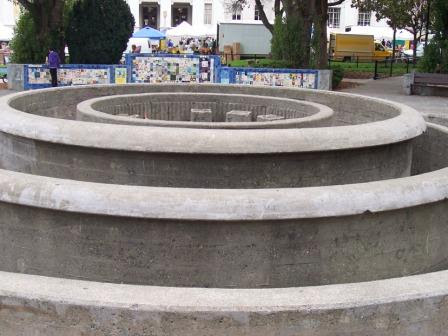 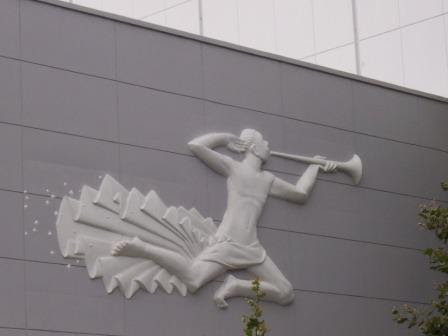 Bas-relief (French origin: "A manner of sculpting in which figures stand out only a little from the background," Reche, 2005) Can you guess the final stop on my tour? It's where I borrowed Berkeley Landmarks. The Berkeley Public Library. I am a huge fan of libraries (and other places with lots of books, like book stores and archives). The public library is making a comeback according to an article in Sunday's SF Chronicle. C.W. Nevius notes that libraries "have become neighborhood hangouts" for children, teens, adults, among other demographics. Nevius is writing about San Francisco's libraries, but I have noticed a similar dynamic at BPL. And, the Central Library now offers WiFi, an indicator of cool-ness. 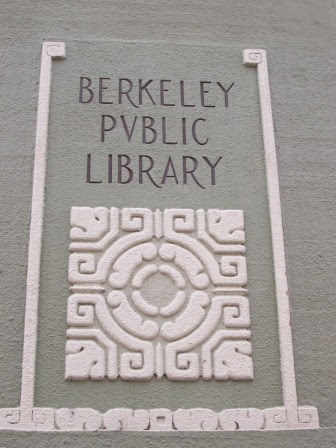