September 02, 2007
Sept. 5, 2007: The herons were not observed in Lake Merritt Channel Park. If you would like to know the location of the heron roost please send an email. The germ of this post was my "discovery" of the Lake Merritt Channel Park on 10th Street in Oakland. I was excited by the sculpture and the walkers along the path in the western section of the park (10th Street bisects the park). Other users of the western half of the park included Tai Chi and yoga practitioners as well as dancers on the Laney College courtyard abutting the park (dancer and Tai Chi practitioners also use the courtyard of the BART Administration building above the Lake Merritt Station). I was not thrilled to encounter extroverted (aggressive) Canada geese. 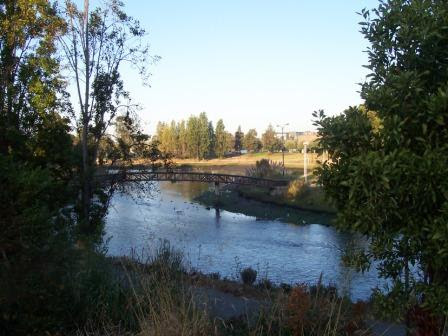 In the eastern half of the park I observed homeless men emerging from the vegetation lining the channel. This section was also used by readers and sun bathers (there is a large lawn). I also observed Canada geese. Both sides of the channel support bird life - herons, egrets, gulls, ducks, pelicans, and cormorants - but I observed more species in the the western half. At low tide, more mud (feeding area) is exposed in the western half of the park. 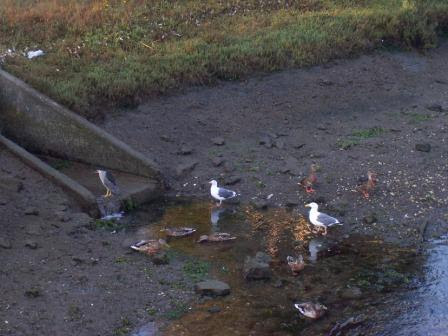 The Lake Merritt Channel Park connects Lake Merritt to the Estuary Park and the Oakland Inner Harbor and eventually to the bay. The Channel Park is separated from Lake Merritt by the 14th Street Interchange and the Nimitz Freeway is located at its southern edge. As I mentioned earlier, the park is bisected by 10th Street. Despite the prevalence of automobile infrastructure when I was in either side of the park, I did not notice the surrounding transportation corridors. In part, the bowl shape of both sides of the park, in particular the western side, dampened traffic sounds, and my engagement with the lives within the park made me less aware of traffic distractions. (There is interesting architecture in the area: the Oakland Unified School District administration building, the Kaiser Convention Center, and the Oakland Museum.) Back to the bird life. On the way to the park for a second time, around 8 a.m., I saw a black-crowned night heron (Nycticorax nycticorax) on a concrete ledge. I've seen this heron before, through binoculars. I was unbelievably excited to see it clearly with my naked eye (passers-by thought me curious). I watched the heron hoping it would "fish" from a nearby large, goldfish-stocked man-made pond. I did not see it fish that morning or on subsequent days of observation. (According to Martin et al. in American Wildlife & Plants, the black-crowned night heron "occasionally makes damaging raids on fish hatcheries.") I also observed what I think was the same heron later in the day. 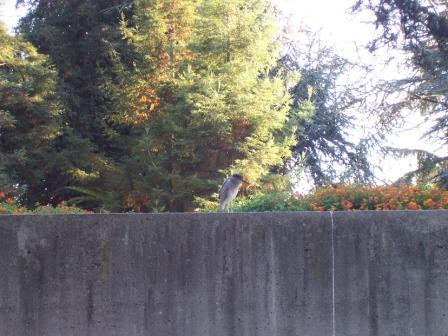 On the third day, I saw a heron (the same one from the previous day?) and two others on the concrete ledge. I also observed that the grove of trees adjacent to the ledge and pond was filled with herons; a roost in a stand of Monterey cypress (pine?), redwood, and live oak! The main heron was also present on the ledge at 4 p.m. 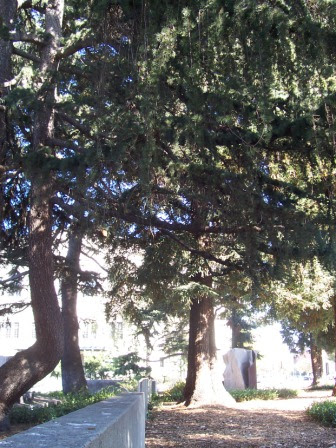 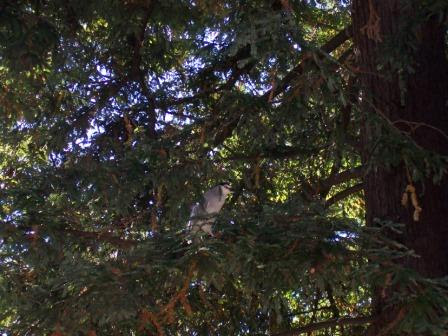 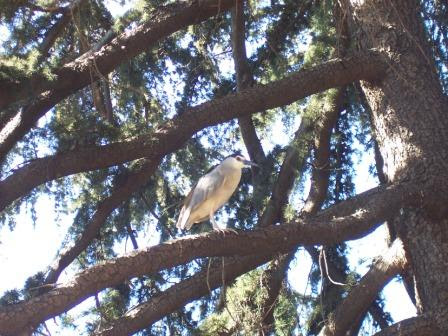 I was looking forward to seeing the herons on the morning of my fourth day in the area, but I was disappointed. There were no signs of the herons. I was cheered when I walked by the eastern section of Channel Park to see a common (or American) egret (Casmerodius albus)feeding in the narrow mud bank. It was perhaps this same egret that I noticed on previous days. In the afternoon, the egret was perched in a Monterey cypress above the channel. The nest of the common egret is "a platform of sticks in large trees, dead brush over water, or in tule marsh" (RT Peterson, A Field Guide to Western Birds). I learned from Mark Liolios (of Aquatic Park EGRET) that egrets like to perch on the dead branches of Monterey cypress. 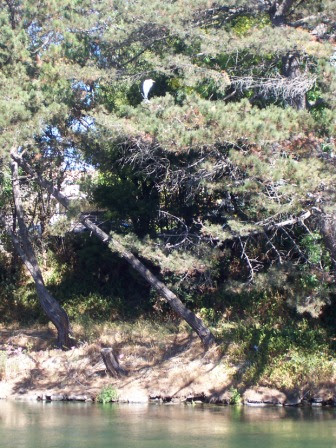 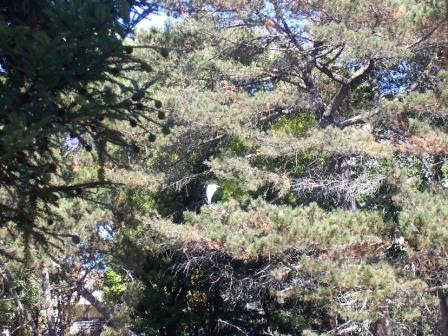 The egret is the bright white shape in the photograph. I walked by the heron roost on my way out of the 10th Street area and observed a heron (I do think it was the heron I first saw in this area) and a second bird, possibly a juvenile, in one of the grove's redwoods. This last observation highlights the real presence of nature in a city. I made this observation standing across the street, at a bus shelter, from the grove. A very short heron video (click on the image to view)