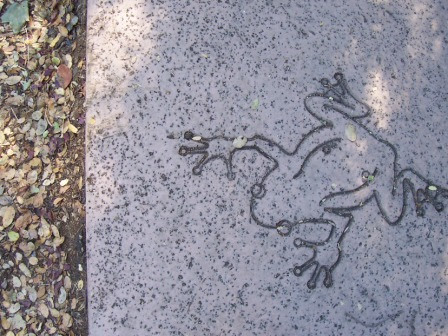 The UC Botanical Garden plant sale had been noted in my calendar since the summer. We set out this morning to purchase local natives for three spots in our garden. I had no particular species in mind, just plants that would thrive in three conditions: below a roof spout with late afternoon sun; below a roof spout with intense afternoon sun; and below a thin-crowned shrub with afternoon sun. The outing was a miss for several reasons. One, the nearby parking lots were full (perhaps I should have biked but I don't have a carrier yet and my knees are quite sore from race training). Two, we realized that we did not bring enough cash. Three, the crowd was off putting. We did not want to be jostled by red wagon carrying buyers and other eager plant enthusiasts. I thought it might be too difficult to browse leisurely on such a fine day. Instead, we drove along Grizzly Peak, stopping to admire downtown Oakland and San Francisco from a scenic viewing area. After that we drove to the Whole Foods Oakland. It was the first visit for one of us. On the way to Whole Foods, we drove by the Temescal Farmers' Market held in the DMV parking lot (a clever use of the space). We decided to stop on our way back from grocery shopping. This was an almost miss. By the time we returned, most of the vendors were putting away their wares and equipment. We bought two ready to eat peaches (the peaches at my favorite grocery store are cold and hard) from a vendor who was slow to pack up. They were delicious in a salad of organic Gala apples, persimmon, and goat gouda cheese. 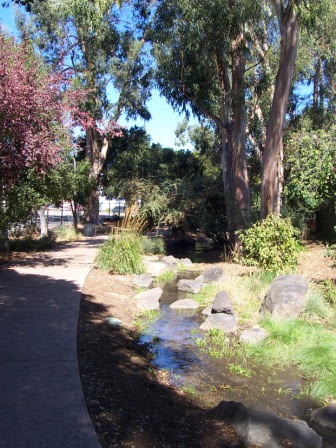 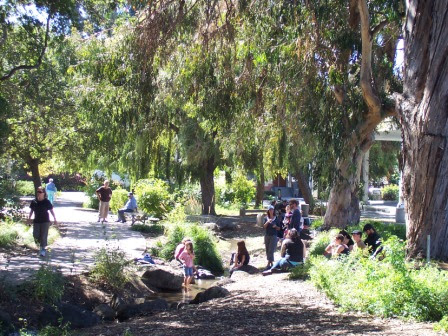 The best thing about going to the Temescal market was finding the Temescal Creek Greenway! I had no idea a creek was in this location; I have been to the DMV on Claremont, but did not notice any signs pointing to the creek or greenway. Anyway, we followed the creek from Clifton to Clarke Streets. Temescal Creek was adopted by the DMV Neighbors Association through the Adopt-a-Creek program sponsored by the Public Works Agency in Oakland. The greenway improvements, of which the creek is a part, are funded by the 2000 Parks Bond Act. Friends of Temescal Creek is a separate group that works with stakeholders in the creek's watershed to provide "a recreational and wildlife corridor from the hills to the bay," including Oakland and Emeryville as well as "a guided urban trail along the Temescal Creek corridor, with pieces of the natural riparian landscape being added to the whole as the community support develops, and as financial opportunities arise" (FoTC website). 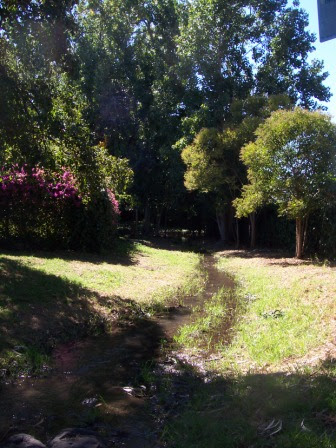 The creek and greenway are a lovely surprise in the landscape of the DMV, abandoned supermarket, Grove Shafter Freeway/24 off and on ramps, and the Claremont and Telegraph intersection. The creek course held lots of interest with pools and riffles. I observed several children playing in the water and small and large groups congregating at the edge and on benches located along the greenway. Towards Clarke Street, a DMV parking lot is well planted with a variety of large shade trees (future subject of a Tree Walk Wednesday). Public access to the creek also ends at Clarke as the creek winds its way behind backyards in the neighborhood.