Why is a sports complex listed as a great city park? Okay, it is 110 acres, but very few of its amenities - 11 soccer fields, 3 dog runs, covered picnic areas, 2 playgrounds, 2.44 mile track, and 22 tennis courts - evoke "great park." Certainly Berkeley has great parks too. Or perhaps, Berkeley, Oakland, and San Jose (the third largest city in California) are not great cities. 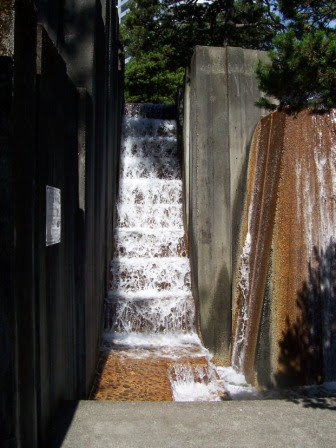 Designed by landscape architect Lawrence Halprin Here are my nominees for great (western) city parks with the caveat that I have not been to every western city and have not seen all the parks in the cities I have visited.
The Berkeley Rose Garden was the last stop on the Natural Parks walk led by Berkeley Path Wanderers member, Susan Schwartz. We used the paths restored and maintained by BPWA to visit each of the parks on the tour. There were approximately 37 people including Ms. Schwartz at the beginning of the walk, but by the time we reached Grotto Rock, several people had departed due to the vigorous pace set by Ms. Schwartz. Back to the Rose Garden. I missed Susan's depiction of the park, but you can learn more about the rose garden on the Berkeley Parks website. Cordonices Creek flows through the rose garden, hence it's inclusion in the natural parks tour. Going in reverse order, the previous point was Remillard Park. The main feature of this park is Pinnacle Rock, the highest climbing rock in Berkeley according to Ms. Schwartz. The Remillards held a "brick monopoly prior to the 1890s depression" and the land on which the 5.9-acre park sits belonged to Remillard's daughter who gifted the land to the city when she could not pay her taxes. The park was officially designated in 1963. Ms. Schwartz noted that the creation of this park was not a result of park activism in the 1960s. 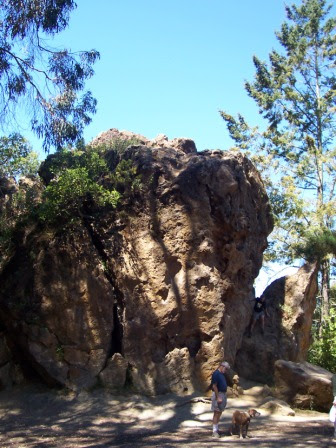 Our sixth stop was Cragmont Rock Park which we reached by taking Easter Way Path, so named because it was used for morning Easter processions. There are spectacular views of downtown Oakland and San Francisco. Prior to Cragmont Rock, we caught our breath at Grotto Rock. Ms. Schwartz noted that ivy and acacia removal as well as drought tolerant and native plantings were ongoing site projects. As we took in the view, two deer crossed the street above our group. The fourth park on our walk, John Hinkle Park, has two creeks running through it: Cerrito and Blackberry creeks. The park was developed during the first world war. The land was gifted to the city by John Hinkle in 1918 and his hunting lodge is still standing though in extremely poor condition. According to Ms. Schwartz, the city does not have money to make repairs to the structure and so wait for "it to fall down." 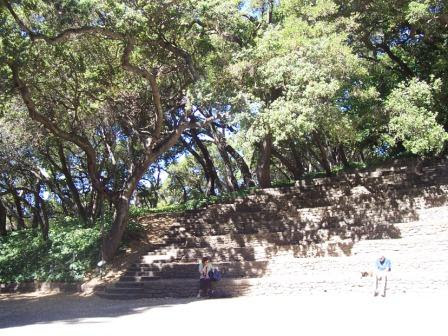 Mortar Rock Park and Indian Rock Park were points 3 and 2 respectively. Mortar Rock has interesting remnants of Native American use in the form of "mortar and pestle" holes in the rocks (below left). Indian Rock Park was a developer set-aside during the development of the Northbrae neighborhood. The park was officially designated in 1917. Ms. Schwartz highlighted the importance of the Indian Rock in climbing history, specifically "Dick Leonard, the 'father of modern rock climbing,' and noted environmentalist David Brower, founder of Friends of the Earth, learned rock climbing and developed their mountaineering techniques at Indian Rock" (Berkeley Parks website). Like Cragmont Rock, there are great bay views from Indian Rock. 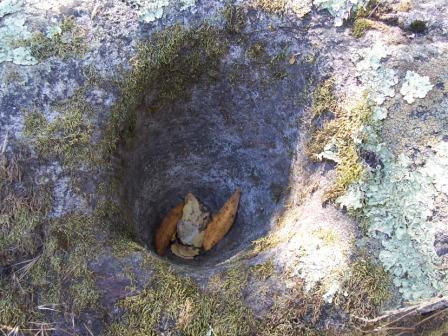 The first stop on the walk was Live Oak Park whose significant natural features include live oak and Cordonices Creek. Live Oak was "voted as a nature park," said Ms. Schwartz. Prior to the development of the park, the site was open fields that separated the downtown from a "wealthy enclave" of doctors, seamen, &c. Ms. Schwartz also pointed out the significant cultural features of the park - the stonework, the fireplaces, and the rock court - which were installed during the WWI years or she phrased it, the "last of the optimistic City Beautiful years."

Other points along the way 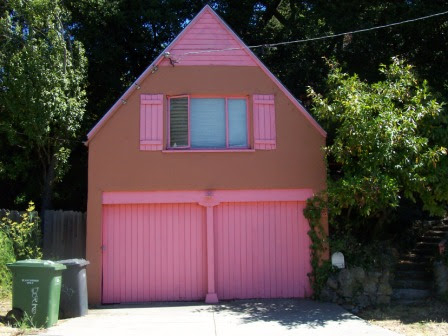 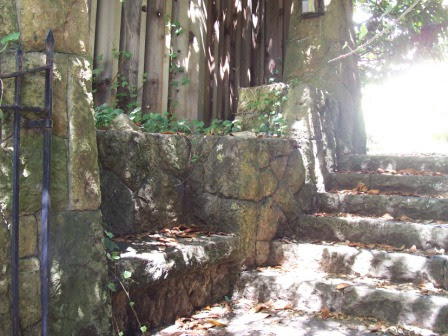