October 24, 2007
I've been listening to NPR and television broadcasts on the fires in San Diego County: 100,000 acres burned, 500,000 people evacuated, 1,000,000,000 in damages to houses, businesses, and infrastructure. Ron Roberts, San Diego County Board of Supervisors Chairman, told Jim Lehrer that the major contributors to the fires are weather related: fast winds, high temperature, and low humidity. Neither Roberts nor other people interviewed mentioned the role of trees in the fires. I find this incredibly interesting because vegetation is usually mentioned as a contributing factor in fires. In fact, a new term - firescape - has been developed to describe fire-related residential landscape design. 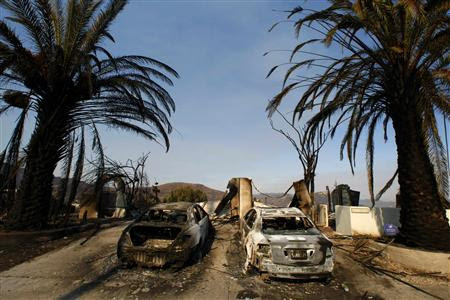 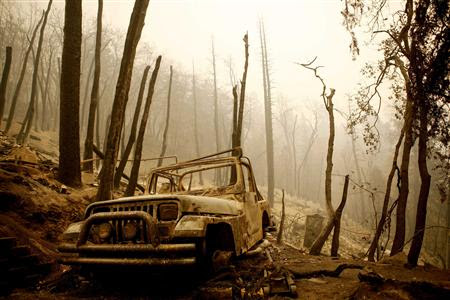 Reuters/Mike Blake; Max Whittaker (right) In the East Bay, trees are a significant factor in fire safety plans for the hills. UC Berkeley and the City of Oakland have plans to remove eucalyptus from the hills. The university plan is being opposed by the Hills Conservation Network, a 10-member group that opposes "clear cutting and chipping" (East Bay Daily News). EBMUD has published Firescape: Landscaping to Reduce Fire Hazard for East Bay residents, particularly those living in the hills. Firescape designs for other parts of California have been published by Fire Wise Napa. The organization recommends a 100-foot radius of "defensible" or "survival" space. For residents of Los Angeles, Monday's LA Times published a residential fire safety diagram which emphasizes infrastructural improvements over vegetation management. UC Berkeley's Center for Fire Research and Outreach publishes up to date fire news on its website.