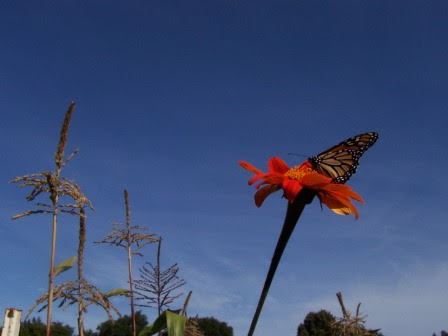 Taken after noon during a windy spell

As an enthusiastic member of the Berkeley Path Wanderers Association (BPWA), I attend as many events as possible. I woke up two hours before the start of today's Harvest Walk because I intended to walk leisurely to the meeting point - the North Berkeley BART station. A typical morning includes reading the New York Times, but an article about croquet absorbed my attention until 9:30 a.m. Realizing I no longer had time for a walk - certainly not a leisurely one - I quickly left the house and hoped to take a bus as far as Shattuck and Delaware, then walk briskly to the BART station. I did not have any luck. A #51 drove by as I reached the Downtown BART station, so decided to take the BART for one stop to North Berkeley. I missed the 9:42 Fremont train and waited 20 minutes for the next one. (BART is a commuter train, not a rapid transit train.) In spite of the wait, I did not miss the start of the walk. I arrived at North Berkeley at 10:04, midway through the introduction. The objective of the walk was to showcase the long growing season in Berkeley. It is possible to harvest produce almost year-round in Berkeley. This was not the case in my Boston garden! The Harvest Walk was led by Jen English of Walking Berkeley and new BPWA board member. Jen is almost finished walking all the streets in Berkeley! The first stop on the walk was a front yard olive tree on Short Street. The street is aptly named; it is one block in length. Jen noted that some people plant fruitless olives to avoid the mess of dropping fruit. Jen did not know if this particular olive was fruitless. (For reflections on tree fruiting in cities, read my essay titled "Bringing city trees to fruition" on Human Flower Project and "Girl trees of Beijing" also on HFP.) 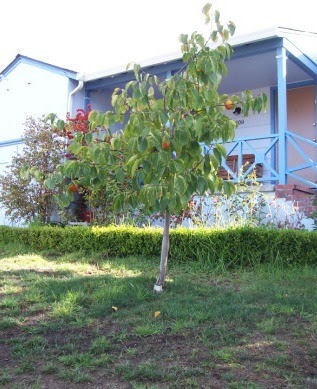 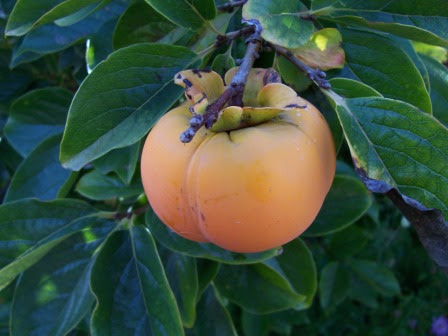 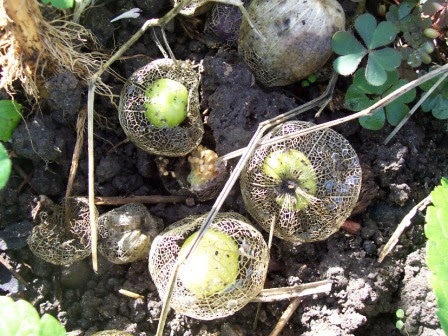 We saw many persimmon trees on our walk including a Hachiya on Acton Street and a Fuyu(gaki) on Keoncrest Drive. Sandy, BPWA president, told the group that persimmon wood is used to manufacture golf clubs. The Hachiya variety has to soften before its palatable while the Fuyu can be eaten like an apple, though Sandy has found that "it gets better with time." At the same Keoncrest address, the ground was littered with ground cherries. I ate my first ground cherry earlier this year. I was given a fruit by a gardener at the Karl Linn Community Garden. From Keoncrest Drive, we walked along Keoncrest Path, the first BPWA path, to Sacramento and Rose. 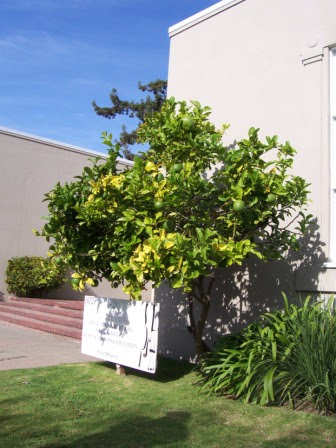 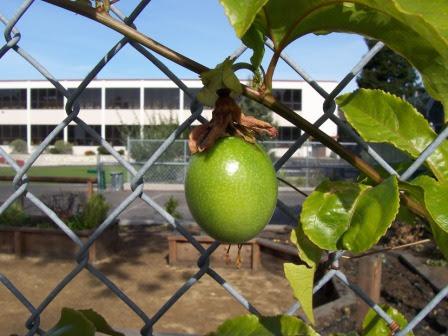 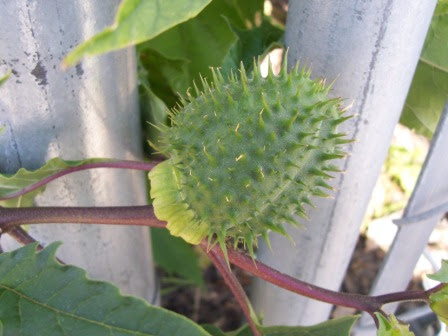 Pomelo. This fruit tree can be found at the Crowden School at 1475 Rose Street. In my notes I wrote "pumelo" which is correct, as are pommelo and pummelo. Pomelo is also known as Chinese grapefruit, jabong, boongon, shaddock, jeruk Bali, and suha (Wikipedia). At the same school, we saw passion fruit and lychee (?) vines. We also saw an example of a superfruit, the pomegranate (in Jamaican patois, the fruit is called a "pongonat"), on Peralta Avenue very close to the Manor Way path. 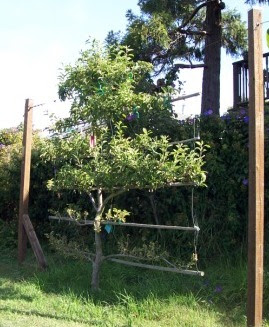 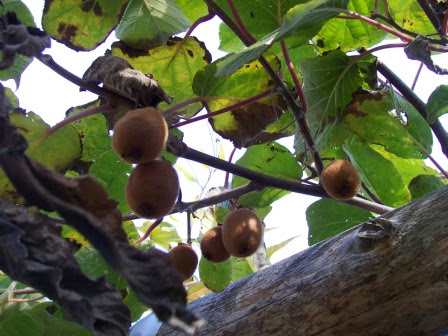 Crowden was not the only school on the walk. We visited the MLK Middle School Edible Schoolyard. We thoroughly explored the edible schoolyard, stopping to admire espaliered fruit trees, a large live oak, several varieties of chicken, a date tree, and kiwi vines. 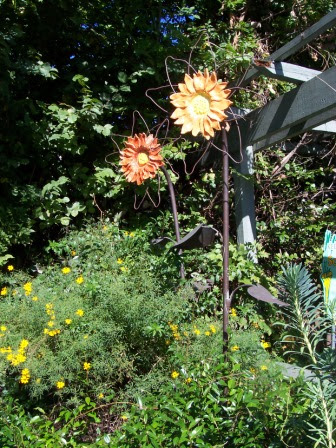 One of my favorite stops on the walk was the garden at Monterey and Hopkins. The sculptured flowers are beautiful and remind me of one of the gardens on the Hidden Gems tour. The latter garden also uses metalwork to represent plants. 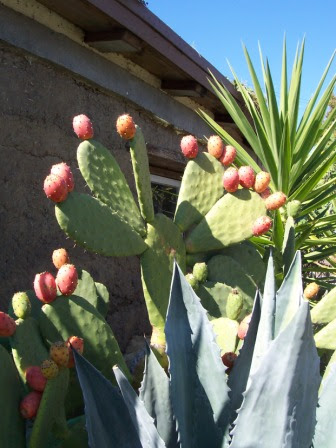 Although the walk officially ended at North Berkeley BART, the last stops were the three community gardens - Peralta, Northside, and Karl Linn - in Westbrae. We approached the gardens by way of the Ohlone Greenway. We saw CHIA members working on the coastal prairie project along the Peralta Garden stretch of the greenway. Jen showed us her plot at Peralta as well as the fruiting cactus and straw bale toolshed at Northside Garden. One of the walkers has a plot at Karl Linn and gave us a tour; this is the smallest of the Westbrae gardens. We saw Karl's lime (I think) tree. Karl Linn played a critical role in the design and development of the Westbrae gardens. He died in 2005, a year after I moved to Berkeley. In October 2006, as part of the UC Berkeley Landscape Architecture Colloquium, I invited David Dobereiner to give a lecture on Karl's design legacy. Karl's book (the manuscript was completed by his wife, Nicole Miller), Building Commons and Community, has been published by New Village Press and a book release party will be held on December 3 (I have been unable to find details online). 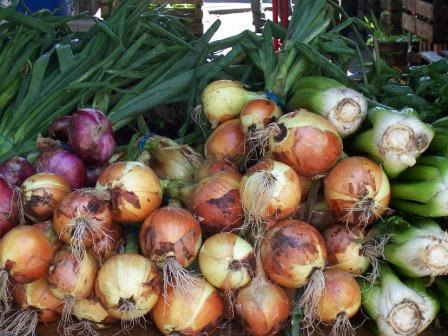 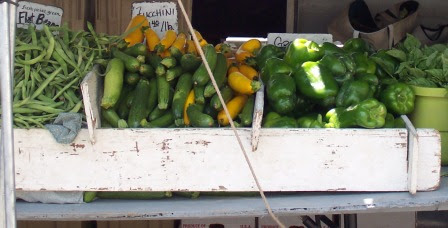 One final note: I've been reading The Belly of Paris by Emile Zola and would like to share my favorite passage. The excerpt is about the color and sensual nature of vegetables:


And by degrees, as the fires of dawn rose higher and higher at the far end of the Rue Rambuteau, the mass of vegetation grew brighter and brighter, emerging more and more distinctly from the bluey gloom that clung to the ground. Salad herbs, cabbage, lettuce, endive, and succory, with rich soil still clinging to their roots, exposed their swelling hearts; bundles of spinach, bundles of sorrel, clusters of artichokes, piles of peas and beans, mounds of romaine, tied round with straws, sounded every note in the whole gamut of greenery, from the sheeny lacquerlike green of the pods to the deep-toned green of the foliage; a continuous gamut with ascending and descending scales which died away in variegated tones of the heads of celery and bundles of leeks. But the highest and most sonorous notes still came from the patches of bright carrots and snowy turnips, strewn in prodigious quantities all along the markets and lighting them up with the medley of their two colors.