October 17, 2007
There are many ways to arrange a tree: a bosque, an allee, a single row, or a specimen. There are also many ways to prune trees. I have noticed more pollarded trees in the East Bay than in other areas of the U.S. (I have heard that San Francisco is the most European American city.) The technique was developed in rural forests (woodlands) to ensure a quick, steady supply of firewood. The technique was adapted to city trees to create a narrow crown for the cramped street conditions of industrial cities. My tree botany sensibilities override my appreciation for the technique's aesthetics. I prefer trees whose crowns exhibit a more natural growth pattern. This preference is influenced in part by the ecosystem benefits of large-statured trees which tend to have large crowns. (Most pollards are large-statured tree species like the London plane tree or sycamore.) Studies have shown that large trees, and by implication trees with large crowns, provide more shade and thus more energy savings and have greater capacities to clean air and attenuate stormwater (Urban Forest Research, Center for Urban Forest Research newsletter, Fall 2003). 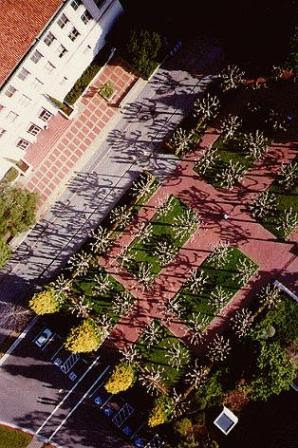 Sproul Plaza (UC Berkeley Kite Aerial Photography photo gallery) Of the instances of pollards I have observed, two are on the UC Berkeley campus. Both are bosques (groves) of pollarded plane trees: one on upper Sproul Plaza and one on the Campanile Esplanade. Pollarding in these locations works well. The trees are planted fairly close together so that when the "skinny" lateral branches sprout in the spring the ground is shaded and the surrounding air cooler. 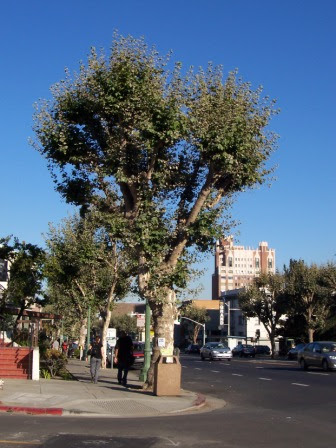 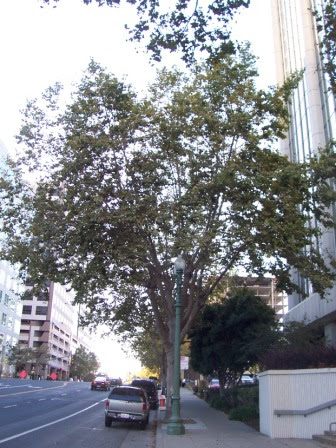 Grand Avenue An allee of pollarded trees along a wide street does not produce the same effects. For example, due to the spacing between trees and the width of Grand Avenue itself, the pollards along the Lake Merritt section provide minimal cooling ofr the sidewalk, the street, and the surrounding air. In the photographs above, the trees are the same species (London plane tree), both are approximately 22 inches in diameter, but with vastly different crowns. The one on the left is a pollard and is located along the Lake Merritt stretch of Grand Avenue. The one on the right is between Harrison and Broadway. The latter has not been pollarded (which is not to say it has not been pruned) and exhibits a more natural growth habit. For more on this practice, read the 1998 Times article "The quirky appeal of pollarding."