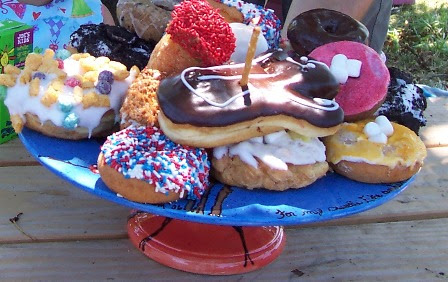 Not candy, but treats nevertheless (the doughnuts were baked by Voodoo Doughnut, Portland, Oregon) The cries of "trick or treat" sent me rushing towards the door beckoning to my husband that there were kids on the street. My first Halloween in Berkeley, I had candy, but no children came by. Either the following year or the year after that, children came to our door, but we had forgotten to buy candy. One year we purposefully did not participate in All Hallow's Eve. This year, we bought candy and children came to the door. One set of children to be exact; a mother came down our drive accompanying her four sons. My Halloween experiences contrast starkly with the neighborhoods west and northwest of mine. On a short run last night, we saw lots of trick or treating activity, decorated homes, and costumed groups on their way to parties. I live in census tract 4236-02. There are 5,047 individuals in my census tract, of which 152 (or 2.6%) are age 9 and under. In contrast, there are 2,370 individuals between the ages of 20 and 24! Furthermore, my block is one of three in the census tract that forms the transition between high density and low density housing. The neighborhoods (census tracts 4230, 34, and 35) in which I noticed a lot of children trick/treating had age 9 and under populations of 354 (out of 4423, or 8%), 501 (out of 4653, or 10.7%), and 228 (out of 2967, or 7.7%), respectively. Given the low numbers of children age 9 and under, I assume that there are not enough households with children to make my census tract a Halloween destination. Boo-hoo! I delight in shopping for candy, partly because I have several sweet teeth. Since I cannot change the numbers of children, I will have to develop strategies to make my place a destination. I could post fliers on Craigslist and local bulletin boards. I could place an ad in the Berkeley Daily Planet. I could devise a light that would beam a pumpkin into the night sky. I could get so Berkeley and outfit a mobile candy unit.