November 24, 2007
Vacant lots are not so much vacant (= empty) as disinvested, by humans. In the wonderful children's book, The City Kid's Field Guide, published by WGBH Boston, Ethan Herberman wrote,

Is there any place in the city where the wildlife lives undisturbed? How about a so-called vacant lot?

Today's Chronicle reported on the housing development that will replace 14-acres of abandoned Japanese American greenhouses in Richmond. I wrote about this project in a discussion of local nurseries as green open space. In that post I noted that the existing vegetation at the greenhouse site did not provide any psychological satisfactions for me, but it is a source of food for seed-eating birds like sparrows and juncos. The Chronicle reporter noted that while preservationists and developers debate the final design of the 14-acre project,

the tough, persistent rosebushes, [that have] gone wild over a decade of neglect, climb toward the glass ceilings, putting out fragrant blossoms. Sparrows and juncos twitter in and out of the broken panes, pecking seeds from the profusion of weeds. 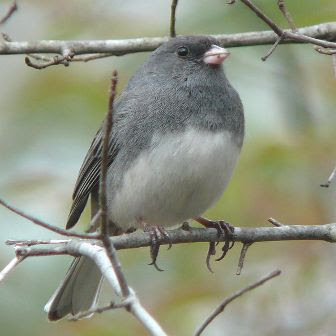 Source: Ken Thomas via Wikimedia Commons Sparrows and juncos (a subfamily of sparrows) are common to the San Francisco Bay Area. The newspaper article was not specific about species, but the Fox, Song, White-crowned, and Golden-crowned Sparrows, and Dark-eyed or Oregon Junco (see above) are present in the area. According to the authors of Birds of San Francisco and the Bay Area, Chris C. Fisher and Joseph Morlan, the fox sparrow is common in the fall and winter (it winters here) and inhabits tangles and brush piles. The song sparrow is a year-round resident, is more common than the fox sparrow, and inhabits "marshes, thickets, blackberry brambles, weedy fields, and woodland edges." The white-crowned sparrow winters here and is more common than the fox sparrow, while a subspecies is a year-round resident, both "feed a short distance from thickets and tall grasses." The golden-crowned sparrow also winters here. Finally, the dark-eyed junco is very common; none of the birds thus far are listed as abundant. The junco lives on the ground and is a year-round resident. 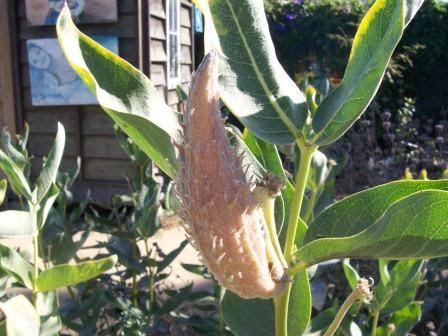 Sparrows and the subfamily of juncos are "primarily ground feeding seed eaters" and have "heavy bills well adapted to crushing seeds" (Alexander C. Martin, Herbert S. Zim, and Arnold L. Nelson, 1951, American Wildlife and Plants). Furthermore, juncos "are partial to seeds of common weeds" (Ibid.). What are the common weeds on urban lots in the Bay Area? I sought help at the central branch of the library and found Anne Ophelia Dowden's Wild Green Things in the City: A Book of Weeds. The book contains plants found in Manhattan, Denver (to represent dry areas) and Los Angeles (to represent the warm southwest), but not the Bay Area. However, I recognized some of the plants, like milkweed (see above) and crabgrass. I've also seen bindweed in my Berkeley garden and dandelion, California poppy, and nasturtiums in street tree lawns. Henry Thoreau (pen name), of the Wild Grass blog, has observed slender wild oat, red brome, and plaintain, among other grasses in San Francisco. In addition to birds, Alexander C. Martin has also written about weeds. His 1972 book, Weeds, describes over 100 weedy plant species. Martin critically observes that the common definition of a weed - "plant out of place" - is human-centric and that so-called weeds "often serve useful functions" which is echoed by the another source on "weedy" plant species (see below). Finally, an internet search yielded a rich source of information specific to this region - the Wild, Wild Weeds Field Guide developed by the Greenbelt Alliance of San Francisco. According to the guide, the most commonly seen wild plants in the cities of the San Francisco Bay Area are: California Burclover (Medicago polymorpha) Storksbill (Erodium spp.) Sowthistle (Sonchus oleraceus) Chickweed (Stellaria media) Crabgrass (Digitaria spp.) - eaten by sparrows Scarlet Pimpernel (Anagallis arvensis) Oxalis (Sour Grass) (Oxalis pes-caprae) Dandelion (Taraxacum officinale) Groundsel (Senecio vulgaris) Mallow (Malva spp.) The Wild, Wild Weeds Field Guide concludes with a list of helpful things to do, one of which is to "teach three friends about a weed and what it’s good for."