The world with(out) us

November 23, 2007
The World Without Us was the title of the first hour of today's Science Friday on NPR. It is also the title of a book by Alan Weisman. Weisman argues that if humans disappeared from Earth, the NYC subway system would flood, power plants would run out of coolant or melt (which would have serious consequences), cockroaches would become extinct in northern climates (they rely on heat to survive winters), rats would also face difficult times with the disappearance of human refuse, raptors would increase in numbers due to increases in woodland cover (and prey on the rats), agricultural fields would undergo succession, and "carrots would revert to Queen Anne's Lace." How interesting! Weisman also talked about things that will remain, like plastic: "all the plastic that has been made is still is there - it's just in smaller bits." I was listening to show as I ran some errands this morning. Going out into Berkeley this morning, the sidewalks and streets were relatively empty. Normally car-packed streets were pleasant to travel on. Berkeley Bowl is closed so I shopped at Whole Foods on Telegraph which was a more pleasant experience with fewer cars navigating the small parking lot. The predominant noise and movement was wind: blowing through trees and blowing leaves across the sidewalks and streets. I enjoy the street life that comes from people on the street, but it was relaxing to experience not only more space, but the wind and other elements without distraction. 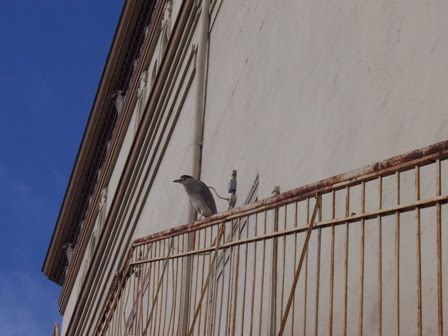 Weisman concluded his remarks by emphasizing the need to share the world with non-humans, like bee species on which we depend. He asked whether we want to manage our population (he predicts a population crash) or have nature do it for us. I think an earlier point he made would have been a better end to the show, at least a more hopeful one. He mentioned the "inadvertent nature preserve" that was created in the DMZ between North and South Korea. Although the nature contained within the Korean DMZ is present because of the absence of humans within the zone, the zone is a human construction (though a product of war). Arguably much of the nature we enjoy, for example in the Bay Area, is strongly influenced by human (in)action: Yosemite was wrested from Native Americans and designated a national park, the East Bay Regional Parks were also preserved as places of nature through human action, Save the SF Bay works to undo the human-induced damage to the SF Bay. Finally, natural parks in Berkeley, like Live Oak Park and Indian Rock, were put into place by us - City Council bought the former in 1914 and the latter was gifted to the city by Mason-McDuffie Real Estate Company in 1921.