The New Deal lives on in the East Bay 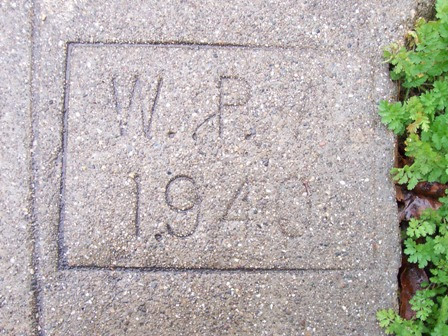 Genoa and 56th Street, Oakland Gray Brechin gave an excellent presentation on the New Deal public landscape in Berkeley on Wednesday evening. The talk was well attended and well received. I had heard Gray talk about New Deal projects before, but Wednesday's night talk provided more detail about Berkeley and the East Bay. For those interested in the New Deal and the public spaces that were created, visit The Living New Deal websites (original and new). The premise behind project is that the public spaces built during the New Deal era are not recognized as such. For example, according to Gray Brechin, 3 billion trees were planted by members of the Civilian Conservation Corps or CCC. These trees comprise some of the inventory of our national forests and parks. The Broward County Library in Florida refers to the CCC as the "New Deal's depression-era ecological movement"! 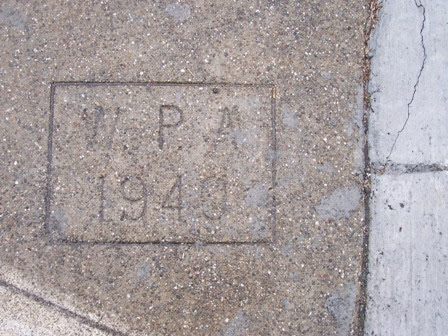 Note the sidewalk repair on the right What is the New Deal inventory in Berkeley and the East Bay? There is a 1934 Civil Works Administration (CWA) plaque at the tennis courts at Cordonices. Gray said that this is the only CWA plaque he has encountered. Another CWA project is the smashed concrete wall of the ampitheatre at Hinkle Park. A similar wall treatment can be found on the stone bridge in Live Oak Park. However, the stone chimney was completed before the New Deal, in the 1920s (according to Susan Schwartz). Berkeley Aquatic Park is a Works Progressive Administration (WPA) project. The adjacent highway was completed by the CWA. Tilden Park was built by a combination of New Deal programs - the CCC, WPA, and Public Works Administration (PWA). The botanic garden in Tilden was the first to be landscaped with native plants. Down the hill from Tilden, in Strawberry Canyon, the CCC was located on what is now the botanical garden's parking lot. The CCC made another important contribution to the East Bay; employees created 10 large relief maps that were used in a public campaign to designate the East Bay Regional Parks District. Connecting the East Bay and the peninsula, the Bay Bridge, although initiated by Hoover, was completed by the PWA.