In the first post on birds, I wrote about creating bird niches, or planting to provide a variety of food sources for birds groups (frugivores versus insectivores). I mentioned that I do not have a yard so much as a few, small growing spaces. One space is 1' x 21' and the other is 20" x 6'. I grow vegetables and herbs in the latter. The other space is already planted with a quince, rosebush, a crocus shrub, and a small tree bearing small, red fruit. I don't know the name. A neighboring purple leaf plum drapes into the space. Finally, there is a space by the front of the lot (there are six units on the lot), near the trash and recycling that supports an unidentified plant. In addition, the neighbor's honeysuckle (or is it a trumpet creeper?) hangs into the space. 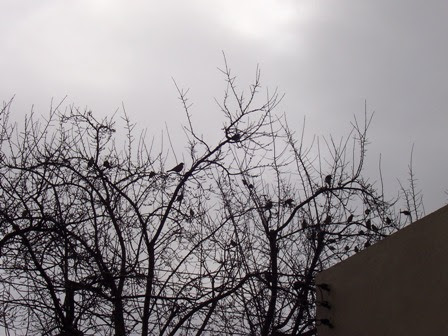 It is still sunny. I began writing this post three days ago, on a overcast, dull morning. However, the birds - robins, cedar waxwings, and more - were singing, loudly. After almost four years of living in Berkeley, I cannot identify birds by their song, I cannot identify many birds by sight, and I am still a plant id novice, hence the unidentified small tree bearing small, red fruit. Despite my lack of local knowledge, which is embarrassing because the name of this blog is local ecologist, the birds still eat the small, red fruit as well as the buds of the purple leaf plum. They also sit in the plum and raise a chorus; they fly from the plum to neighboring trees - more small trees bearing small, red red fruit and lemon trees. The street tree in front of the lot is also a prime perch site; it's a purple leaf plum. One of the birds whose return to the yard is exciting is Anna's hummingbird (Calypte anna). I really like its song. Two University of California, Berkeley researchers have shown that the song is made as wind passes through the hummingbird's spread tail feathers at the end of a dive, rather than via vocalization.

You can read the article about the research findings and watch a video of the researchers at work on the SF Chronicle web site.