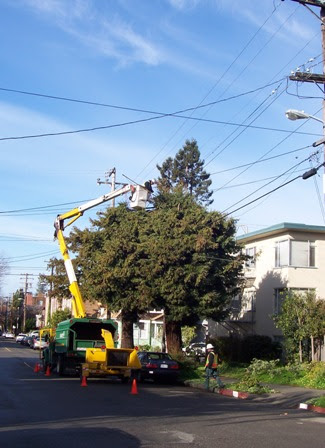 The utility pruning in the photograph occurred on Blake Street, south of Telegraph, in Berkeley. The tree is a topped redwood. Topping is an inappropriate and harmful form of tree pruning. (Arguably, a redwood should not been planted beneath overhead utility wires.) Lilly writes,

Severe heading causes branch dieback, decay, and sprout production from the cut ends, resulting in a potentially hazardous situation once the sprouts become large and heavy....If a tree has been topped previously...crown restoration can improve its stricture and appearance. Restoration consists of the selective removal of watersprouts, all stubs, and dead branches to improve a tree's structure and form....Restoration usually requires several prunings over a number of years.

A Davey Tree crew was pruning the redwood. I do not know what contract relationship the City of Berkeley has with Davey Tree, but I did find a 2007 City Council memo about tree removal services with West Coast Arborist, Inc.