Tree Walk: Land of the oaks

This post began its life as a short essay about “what’s in a name.” I’ve long been interested in the use of natural elements to name places. Of course, it is ironic in a suburban context where streets and subdivisions are named for plants and animals that no longer inhabit the area, at least not in the numbers they did before development. Anyway, I’ve also been enamored of the large coast live oak at Oakland City Hall and thought the combination of place naming and oak trees would make a good post. 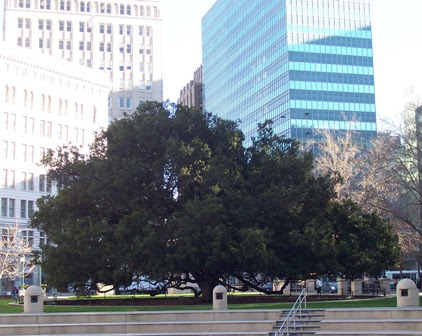 In 1852 the City of Oakland was officially incorporated from Rancho Encinal de San Antonio owned by Anthony Peralta. The translation is ranch of the oak grove of St. Anthony. The men present at incorporation considered An Antonio, Encinal Oak Grove, and Land of the Oaks, before settling on Oakland (Land of the Oaks, James Harlow, 1956).

Pre-incorporation, the Rancho Encinal de San Antonio hosted 900 acres of oak woodland in present day downtown Oakland (dissertation, David J. Nowak, 1991). The woodland had “approximately 1400 trees with fourteen percent tree cover within the stand” (Nowak, 105). According to Nowak, the oak woodland was the second most dominant vegetation type preceded by grass/ shrub/ marshland which covered 98% of the area. The third and fourth most dominant vegetation types were riparian woodlands at 350 acres with 110,000 trees and redwood stands at 175 acres with 13,000 trees. Total tree cover in Rancho Encinal de San Antonio is estimated at 2.3%.

Harlow (1956, 16) notes that Oakland’s “first name might have been Temescal.” The Peralta brothers named the creek that flows through the former ranch Temescal, possibly after sweat lodges (or temescalli) sited along the creek (see Wikipedia entry on the Oakland neighborhood).

Another Bay Area creek is named for something that used to be common along its bank. Strawberry Creek in Berkeley was so named for the strawberries that grew along its bank (Harlow). I wonder if daylighting plans for the creek include replanting strawberries. The option to pick your own fruit at a public creek-park would be another first for Berkeley.

Finally, back in Oakland, the Fruitvale district was named for orchards and fruit farms that were the dominant land use during the nineteenth century.