“It’s a ‘duck,’” said John of the spigot outside Hydra on Fourth Street. The architectural term “duck,” coined by Robert Venturi, Denise Scott Brown, and Steven Izenour in Learning from Las Vegas: the Forgotten Symbolism of Architectural Form, was new to me. The first duck was a duck; a duck-shaped building in Long Island built by a duck farmer.

A duck is “any building shaped like its product,” according to a Newsday article reporting on the Long Island Big Duck. Technically, the Hydra building is not a duck. It is not shaped like a spigot or other bath product though the spigot alerts you to the fact that the store sells bath-related items. Interestingly, you can see a large yellow duckie through one of the windows (third window from the right). 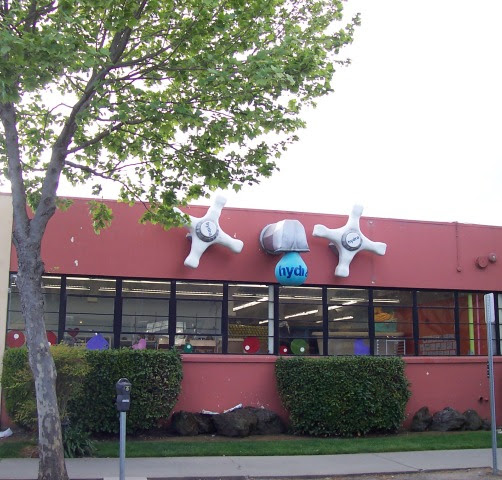 The Hydra spigot “duck” is one of the sites on this year’s Hidden Gems Tour. The tour will begin at San Pablo Park on Saturday, May 10 at 10 a.m.