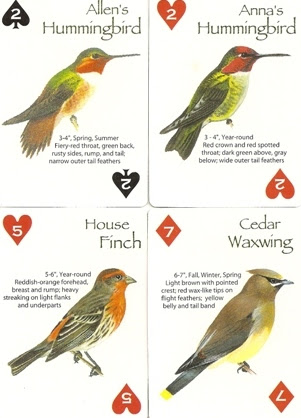 The Ecology Center in Berkeley is a great resource for many things eco, from reference books to housewares, from posters to playing cards like the ones pictured above. These six cards are from a deck titled "Local Birds - Northern California Backyard and Trail Birds." The six species pictured on the cards are commonly seen in my backyard. I have not done anything special to attract these species. All the plants in the backyard where there when I moved into the duplex four years ago. I have added new plants to the front and side yards. I borrowed a book from the library about attracting birds, but it is not useful for the Bay Area; it's perfect for folks living in the Prairies or on the Atlantic seaboard. I turned to my personal copy of American Wildlife & Plants, a text I have mentioned several times on this blog. The list of cultivated and wild plants visited by hummingbirds in warmer parts of the U.S. and on the Pacific seaboard are numerous, so I will only list the ones with which I am familiar: Butterflybush (a favorite of butterflies, hence the name) Sage (which I planted in the side yard) Lemon (my neighbor has a tree) Geranium (I planted several in the front yard) Hollyhock (my seeds have not germinated) Horsechestnut (no trees on my street) Rose (there is a pink rose in the backyard) The wild plants include manzanita and milkweed (I plant to sow seeds of the latter in the fall). Last week the backyard was visited by many House Finches. Its red crown stripe and specked belly are good markers. In California, filaree makes up at least 50% of the house finch's diet. Filaree is classified as a "weed plant" and Martin et al. note that the finch's "main diet consists of weed seeds." In my backyard they eat buds. The Cedar Waxwing is one of my favorite songbirds. I love the soft yellow color of its belly as well as its crown tuft. Waxwings, also known as cedarbirds, consume mostly fleshy fruits which in the Pacific are from the California peppertree, cultivated cherry and grape, mistletoe and strawberry. The waxwings also eat animals like beetles, ants, caterpillars, grasshoppers, and crickets. 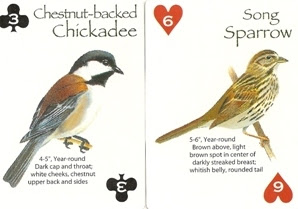 I think I've seen a Chestnut-backed Chickadee, but according to Martin et al., the chestnut-backed chickadee is "found in relatively wild, timbered tracts" which my backyard is not. Joseph Grinnell and Margaret W. Wyth did sporadically observe Santa Cruz Chestnut-backed Chickadees in their 1926 (!) publication, Birds of Berkeley Campus). I've definitely seen the Song Sparrow though it's less common than the first four birds described above. Martin et al. describe it as "the commonest, best-known and most loved songster in the United States. It is nearly equally at home in town or in country." Although the bird is shy it eats in the open; it eats animals (beetles, grasshoppers, crickets, caterpillars, and ants - there are a lot of ants in my yard!) and plants which in California include pigweed (10-25% of its diet), knotweed, and minerslettuce. I'll close this Bird Watch with a quote from Suburban Safari about hummingbird physiology:

Like tiny bears, they slow their breathing and depress their heart rate from 1,000 beats per minute to just 150. On a cold spring morning like this [Holmes is writing about her yard in Maine], my hummers may need fifteen minutes to power up to flying temperature (13).