Ginkgo's smelly fruit is edible and the tree is long lived 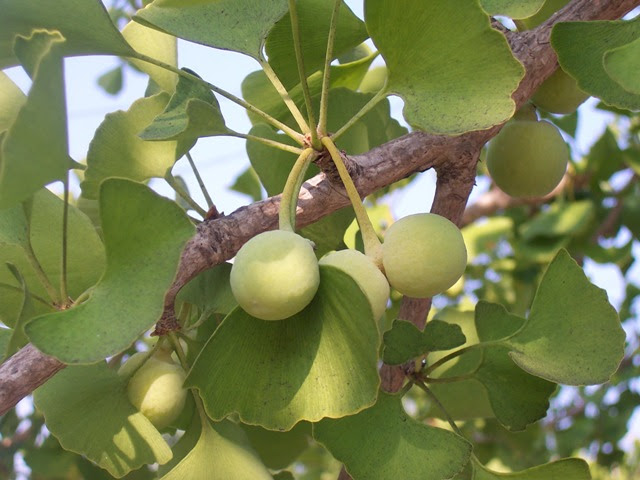 One day last summer on a stroll down 66th Avenue in Oakland, a smell brought me back to a short street (one block) in the South End neighborhood of Boston, Massachusetts, lined with a single tree species. The smell and the tree: the ripe fruit of the female ginkgo tree (Ginkgo biloba). It was pungent; for me, a cross between a rotten apricot and vomit. Ginkgo derives from two Japanese words: "gin" meaning silver and "koo" or "kyoo" meaning apricot. (Biloba refers to the double-lobed leaf.) A recent essay in the New Yorker about ginkgos in New York City also brought me back to the afore-mentioned street in Boston. The article reports about a group of three youth, known as the Anti-Ginkgo Tolerance Group, who urge "citizens to call 311 if they encountered the smelly seeds." In my capacity as street tree program manager for the Boston Parks Department, I was once asked if the city would remove several ginkgos. Neighbors - at least the resident with whom I met - did not like the smell nor the fruit litter on the sidewalk. It is worth noting that the ginkgos in questions were at least 10 inches in diameter at breast height. A ginkgo grows slowly. An aside: Tonawanda Street in Dorchester, Boston, Mass. has beautiful, mature ginkgos. I explained to the South End resident that the City only removes dead or hazardous trees in keeping with the Massachusetts General Law which gives municipalities tree warden power. In addition to the legislative rule, I offered practical advice. I mentioned that the fruit releases its odor when it is bruised or crushed (triggering the decay process), so the malodor could be mitigated by harvesting the fruit. Neither piece of information satisfied the resident. Unfortunately I could not contact a harvesting group. At that time in Boston, there were no organizations that coordinated street-tree fruit harvests; there still are no such organizations to my knowledge. (However, EarthWorks Projects harvests fruit from urban wilds and schoolyard orchards.) 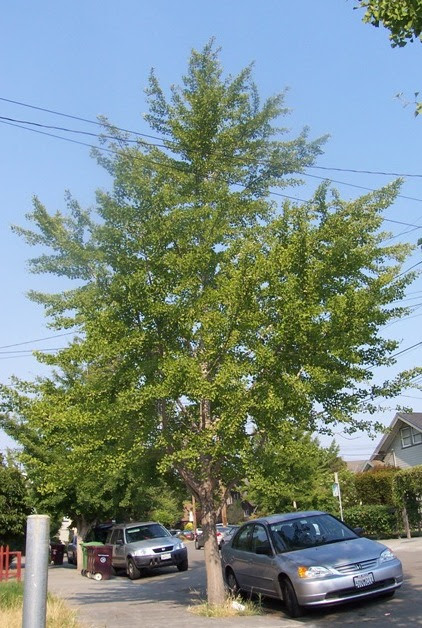 Many cities no longer plant the female ginkgo. I think this is unfortunate. Street trees potentially embody functional ecology (ecosystem services) and food production. I would guess that more city dwellers have access to a street tree than to a yard. I derive great pleasure from picking and eating the plums from the street trees in my neighborhood, but unlike a plum tree, a ginkgo is long lived and large statured, thus providing more benefits for a longer period. Plant female ginkgos and harvest their fruits! The ginkgo nut is edible: "both a prized delicacy and an invaluable food for long life...throughout Asia" according to the New England Ecology Garden. The nuts, roasted, "make a tasty snack," according to Flordata.com and Lucy at the Nourish Me blog offers a ginkgo nut custards recipe. Note: some people are sensitive to the pulp; also, the extract can be toxic.