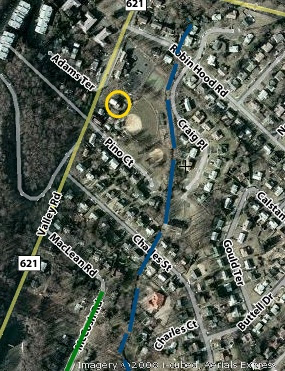 An after-breakfast walk took us past a nineteenth-century Dutch farmhouse on Valley Road, a creek on Robin Hood Road, and a block of McCosh Road planted with seven species of (street) trees. In the aerial above, the farmhouse is outlined in yellow, the creek in blue, and the block of trees in green. The creek - whose name I have been unable to find - is located in Watershed Management Area 4 of the Passaic River watershed in New Jersey. The creek runs perpendicular to Robin Hood Road in the first block east of Valley Road. The first indications that there was water were a thick line of trees (riparian zone) and a bridge railing along the sidewalk, pictured above. 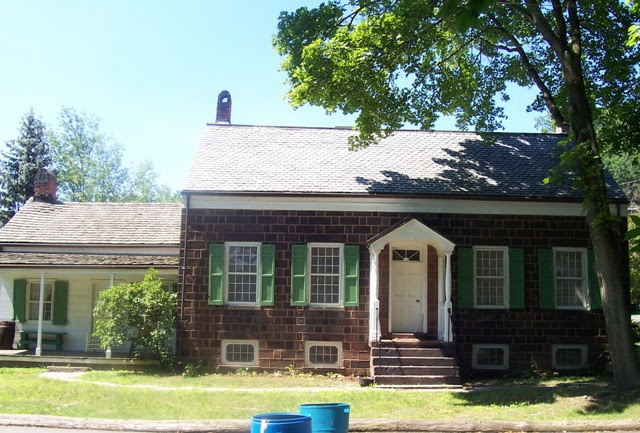 We discovered the farmhouse between a shaded block of McCosh and the creek. The nineteenth-century house and garden are a museum - Hamilton House Museum - set amongst single-family houses, Montclair State University, and municipal playing fields. The house was moved to its present location in 1973; its current footprint is significantly smaller than the original 96-acre homestead. The museum is open for tours on Sunday afternoons. Click here to see a photograph of another farm in Clifton; Ploch's Farm has been in operation since 1867. In other farm news, I noticed a sign with the following slogan - "Save the Garden State, Keep the NJ Dept of Ag" - at a local nursery. New Jersey governor Corzine's 2008-2009 budget calls for the elimination of the Department of Agriculture among other state agencies. The numbers: the New York Times reported that the state needs to make $2.7 million in cuts and the elimination of the agriculture department would save $500,000. Blog PolitickerNJ.com reported that the agricultural industry is state's third largest revenue source at $82 million behind pharmaceuticals and tourism. 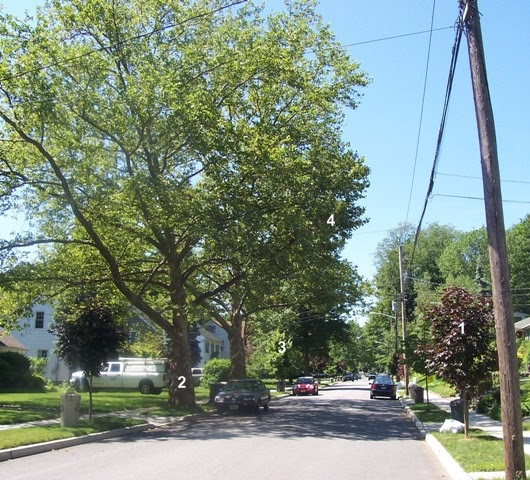 Farms are only one aspect of the garden in the "Garden State." I have observed a variety of sidewalk canopy conditions in various Jersey towns including the block of McCosh Road pictured above. We counted seven tree species: Pin oak (number 4), Callery pear, Littleleaf linden, American linden (number 3), Norway maple (number 1), Red maple, and London planetree (number 2). Not only is the planting strip narrower on the west side of the block, but there are overhead utility wires. Unfortunately, large stature trees like the Norway maple and Callery pear have been planted beneath the wires. An example of poor pruning techniques and the conflict between wires and large trees is shown in the photograph below (which was taken on McCosh). 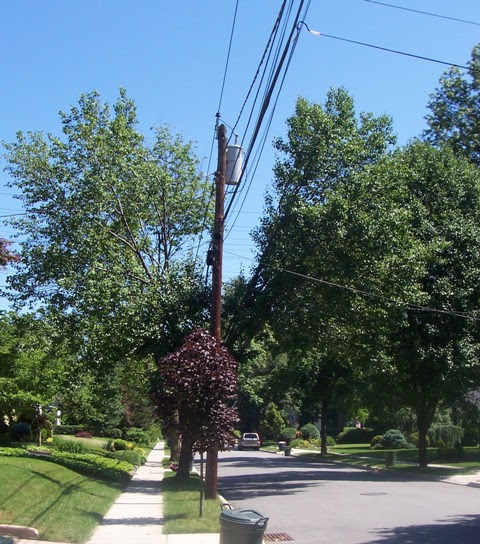 For a discussion of streetscape design, read "A Tall Order—Large Stature Trees" and "Street Trees: Let’s Think Outside the Wires," both available at Human Flower Project.