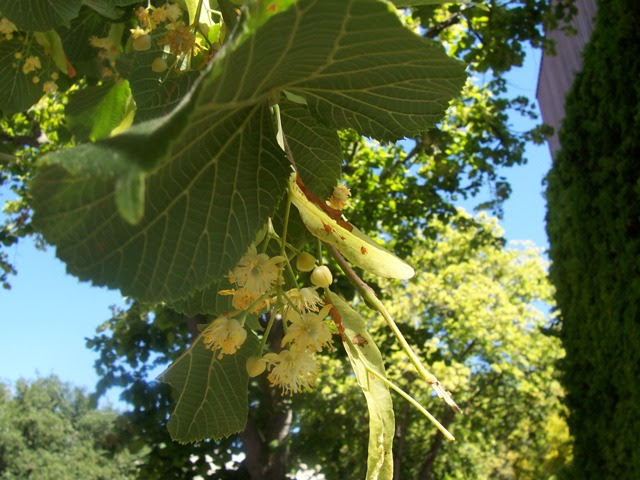 June 21 is the summer solstice and the official start of summer but the presence of linden flowers is a good sign that summer is already here. The flowers bloom “for about two weeks, when spring turns to summer,” according to Plotnick in The Urban Tree Book. The linden (genus Tilia) pictured above is not a littleleaf (T. cordata) or a silver linden (T. tomentosa), common lindens on the streets of Boston where I worked as an urban forester. I think it is a bigleaf linden or T. platyphyllos. The leaves of the lindens tend to be heart shaped with imperfect – lopsided – bases. The leaves end in long points, a perfect design for directing water to the root zone. The lindens also grow a second type of leaf known as a bract, a “more or less modified leaf situated near a flower or inflorescence” (H.D. Harrington in How to Identify Plants). The bracts frame the lindens’ flowers (pictured above).

Both the flowers and leaves of the linden offer something sweet. The sap produced in the leaves attract aphids who greedily drink too much and excrete it on the leaves and anything below the canopy of the tree. Many animals benefit from this excreted sap; ants, flies, and moths eat it as well as “a sooty mold that blackens the leaf” (A. Plotnick). Plotnick describes the perfume of the linden’s flowers as “a floral mist” that is “diffused…through the neighborhood.” The flowers are complete; they have sepals, petals, stamens, and pistils. Bees pollinate the flowers, but there is a price to be paid for the abundance of flowers, pollen, and nectar. Plotnick writes that silver and Crimean lindens produce a toxic substance that seems to be concentrated in pollen. Bumblebees tend to eat pollen. Honeybees extract nectar which is less toxic. Cultivated linden honey is “sold as a delicacy and used in liqueurs.” The flowers are also steeped to make an herbal infusion – tilleul – in France. 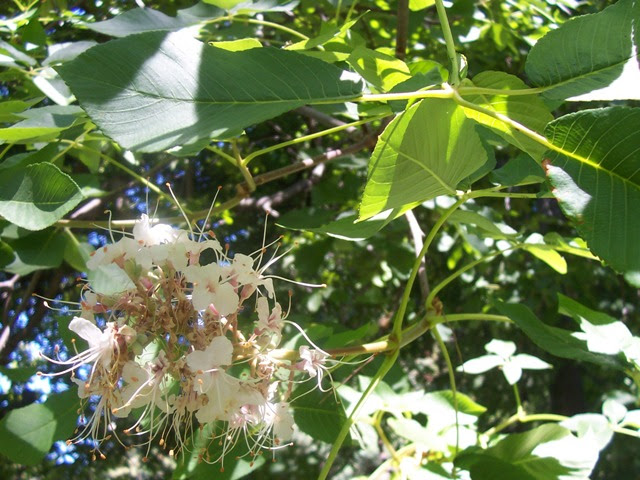 I’ve written about the genus Aesculus on this blog. The ones that grow along Adeline Street near the Berkeley Bowl are horsechestnut or A. hippocastanum. I am most familiar with this species; there were several in front of the parks department building when I worked in Boston. During my time there one was killed by an errant driver. The horsechestnut flowers have peaked but the California buckeye’s (A. californica) flowers are still in bloom. The tree pictured above grows north of the alumni house on the UC campus. There is a buckeye growing as a street tree on Parker Street at Dana in the Le Conte neighborhood. The buckeye, like the horsechestnut, has a palmate leaf (spread apart your fingers for a rough visual aid) but its leaves are narrower than those of the horsechestnut. There are three types of palmate gemoetry: divided, parted, and compound. The leaves of the genus Aesculus are compound. On to the flowers. If the branch structure of the buckeye is like a candelabrum (A. Plotnick), then the flowers are its lights! In fact, Plotnick writes that buckeyes and horeschestnuts are refered to as “candle trees.” The geometry of the floral cluster is a thyrse described by H.D. Harrington as “a cylindrical or ovoid-pyramidal, usually densely flowered panicle on the order of a cluster of grapes or a lilac inflorescence.” There are 100 – 200 blossoms per thyrse and like the linden, the smell is intoxicating. The smell is described by A. Plotnick as “a soapy summery aroma.” Plotnick provides a description of the complexities of floral design:

The individual flowers could not be more gracefully structured or inviting. Examine them closely. Pollen sacs are extended on long wiry filaments. A sweet nectar lures pollen spreaders along the female parts. Color makrings on the petals provide ‘honey guides’ for the clueless. And when the sweet stuff is used up, the petals undergo color changes from yellow to orange and carmine, signaling, MISSION ACCOMPLISHED. VISIT OUR OTHER FINE BLOSSOMS (p. 244).

Like the linden, the horsechestnut and buckeye are toxic, but in this case it is the seed not the flower, and the toxicity is towards humans, not bees. The horsechestnut has been confused with the American chestnut, Castanea dentata, which is related to beeches (genus Fagus), native to the eastern U.S. , and was decimated by an Asian fungus between 1904 and the 1930s (A. Plotnick). The chestnut seed is edible but not the horsechestnut or buckeye seed. The latter contains a substance known as esculin “that destroys red blood cells” when ingested; esculin can be extracted via boiling (A. Plotnick). 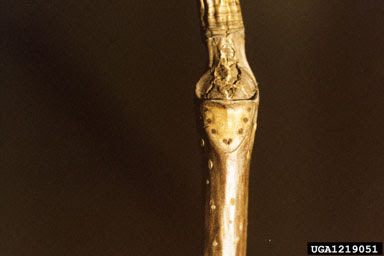 Source: Forestry Images, Univ. of Georgia, Warnell School of Forestry and Natural Resources The common names – horsechestnut and buckeye – were derived from “associations with horses,” according to Plotnick. For example, the buckeye’s seed resembles the eye of a horse because of the helium – “the scar where the seed broke away from the fruit” (H.D. Harrington) – which resembles an iris. Also, the leaf scar (where the leaf was attached to the stem) resembles a horseshoe (pictured above).