The cours, a garden allee style carriage way, was introduced to France from Italy by Queen Marie de Medici in 1616. Henry W. Lawrence, in the article "Origins of the Tree-Lined Boulevard," writes

[Marie de Medici] had a new type of quadruple allee installed along the banks of the Seine below the Tuileries. The new feature, the Cours de la Reine, was especially for carriage riding. The form was apparently inspired by the roadway, known as the Corso, along the Arno River outside Florence....The cours was especially important because it transformed the garden allee into a place for vehicles.

The cours and garden allee, according to Lawrence, are two of ten precursors to the tree-lined boulevards of the nineteenth century, popularized by Napoleon III and Baron Haussmann in Paris. Lawrence's expansion of the "Origins" article is now available in book form - "City Trees: A Historical Geography from the Renaissance through the Nineteenth Century." 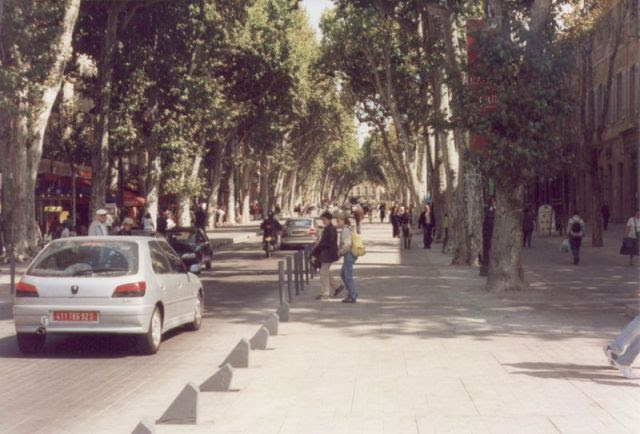 Mary Frances Kennedy (M.F.K.) Fisher describes the Cours Mirabeau, above, in her book "Two Towns of Provence." She begins in an "informative vein" but quickly transitions to a prose description of "its ineffable allure" -

It is probable that almost every traveler who has ever passed through Aix has been moved in some positive way by the view from one end of the Cours or the other, by the sounds of its fountains in the early hours, by the melodious play of the pure clear sunlight of Provence through its summer cave of leaves....It is a man-made miracle, perhaps indescribable, compounded of stone and water and trees, and to the fortunate it is one of the world's chosen spots for their own sentient growth.

The first trees were elms, and they too grew handsomely to shade the rich gentry in their carriages and the people of the upper class who strolled beneanth their shade. They dies in a plague that killed almost every elm in Provence, and beginning in 1830 they were quickly replaced by the plane trees which now thrive along the Cours and help make it what has often been called "the most beautiful Main Street in the world."

M.F.K. Fisher was born 100 years ago this July 3. Learn more about her life and her books.