Local ecology's fourth nature-made profile, Plant*SF Sidewalk Gardens, is complete (thank you to Jane Martin, Plant*SF founder). The essay is re-posted below and to celebrate this accomplishment we will be posting the other profiles throughout the week.

"Parks along the way" was Jane Martin's response to the Neighborhood Parks Council's 2003 call for locating new parks in the northeast Mission District of San Francisco. Martin imagined sidewalks transformed into very local natural areas. Martin was also responding to periodic flooding of public and private areas like sidewalks, streets, and buildings in her neighborhood whenever the city's combined sewers overflowed. Combined sewers tend to fail duing heavy rain events; stormwater runoff is carried in the same infrastructure as sewage and the system overflows when its carrying capacity is exceeded. One solution to reducing runoff - and the occurrence of combined sewer overflows (CSOs) - is to reduce the amount of impermeable surface area.

Martin's vision of "parks right out your door" fit the bill. Removing concrete to expose soil and adding vegetation and rocks (mulch) captures rain before it becomes runoff. The addition of the stormwater management element to Martin's park idea was "before the mainstream green movement" began and significantly propelled the project. 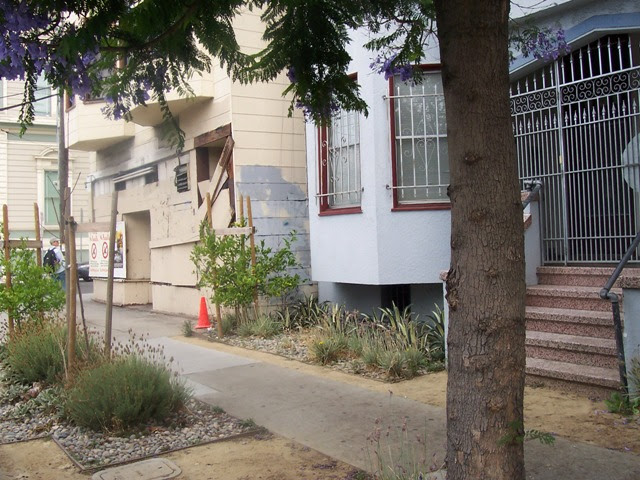 The first Plant*SF - Permeable Landscape as Neighborhood Treasure in San Francisco - project was completed in 2003. Martin adapted an existing permit - the minor sidewalk encroachment permit - to create her model permeable landscape on Shotwell Street in the Mission District. Despite her familiarity with design - she is an architect - the permit development was "cumbersome, expensive, and lengthy." Martin's diligence led to a new permit, the sidewalk landscape permit which was signed into law in 2006.

Since the legislated passage of the permit, approximately 200 Plant*SF-style sidewalk gardens have been developed. The Los Angeles Dept. of Water, the City of New Orleans, and folks from African countries, Japan, and Belgium have used Plant*SF's design of and policy framework for permeable landscapes. Plant*SF was part of a gallery exhibition in Brussels and is a member of the Alliance for a Clean Waterfront, whose mission is to "identify and promote technologies that turn 'waste' water and its treatment into public beautification projects, ground water recharge, wildlife habitat and environmental education." Like the Alliance's mission, the motivations of neighbors who implement permeable landscapes "run the gamut." Initially, on her block, Martin's neighbors emphasized aesthetic and property values but quickly realized the safety benefits the project could provide. Neighbors felt that the sidewalk garden communicated care about the neighborhood. Joan Iverson Nassauer has written about "cues to care" or culturally-specific modes of stewardship that signal care of a place. 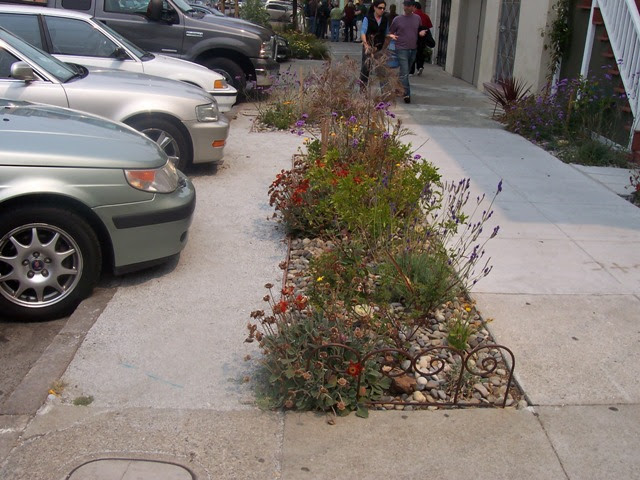 The newest Mission-based sidewalk garden, at Harrison and 23rd Streets, is storied by two couples and highlights the psycho-social dimensions of greenspaces. The first story concerns an elderly man who one day spent half an hour thoughtfully observing the Harrison Street Greenway. The next day the man brought his female companion to share the space. Both have lived in the neighborhood since the 1940s and congratulated Martin and PlantSF for helping to restore the quality of life in a neighborhood described by Martin as formerly a "rough area." The second couple took the first walk with their newborn along the greenway "to introduce him to nature."

Plant*SF is not simply an advocacy group to Jane Martin. Her perception of nature in the city has been affected. She remarked that while she always appreciated native plants and animals - she's a "lifelong gardener" and has incorporated landscape design into her architectural practice - she has become "much more attuned" to the fact that "if we don't provide particular plants, native insects and animals will go away." Martin feels that "few people are keyed" into this connection. Private property owners are responsible for sidewalk maintenance and interventions like permeable landscapes, so advocacy and education are essential to transforming impervious sidewalks into critical, green infrastructure solutions to stormwater management.