Despite the reference to a land of oaks, Oakland’s streets are not lined with oaks. And depending on the neighborhood, many of its streets are either partially tree-lined or entirely devoid of trees. (The city and community-based tree groups are planting to remedy this situation.) In his 1991 dissertation, Dave Nowak (now a research forester with the US Forest Service), observed that Oakland “only plants 80% of its total street distance.” This has consequences for environmental quality in terms of air and water quality, temperature moderation, stormwater management, and wildlife forage and habitat. It also bears on the livability of the street. Donald Appleyard (1980), widely recognized for his groundbreaking research on the physical and social dimensions of livable streets, wrote that a green street of trees and other vegetation is one of the most popular qualities of residential streets. 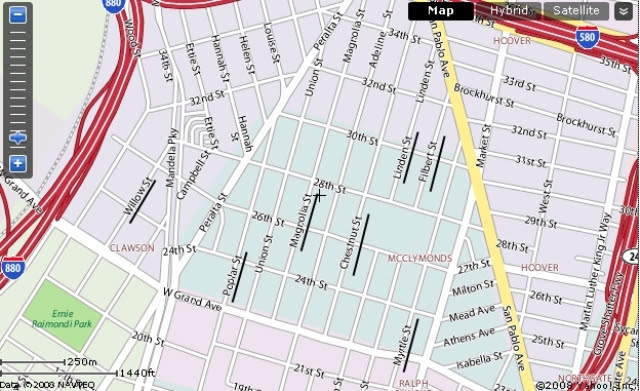 One of the neighborhoods with low street tree cover is West Oakland. Interestingly, several streets are named for trees. Tree-named streets are a recurring theme on local ecologist; we’ve written about such streets in Philadelphia and in Berkeley. Where streets are named for trees, the names could provide a framework for tree planting, i.e. streets with tree names could be planted with the species with which they share a name. For example, Linden Street could be planted with lindens. Lindens tend to be large in stature at maturity requiring certain physical conditions for optimal growth. In general, large stature trees are not approved for planting beneath utility wires or in narrow sidewalks. 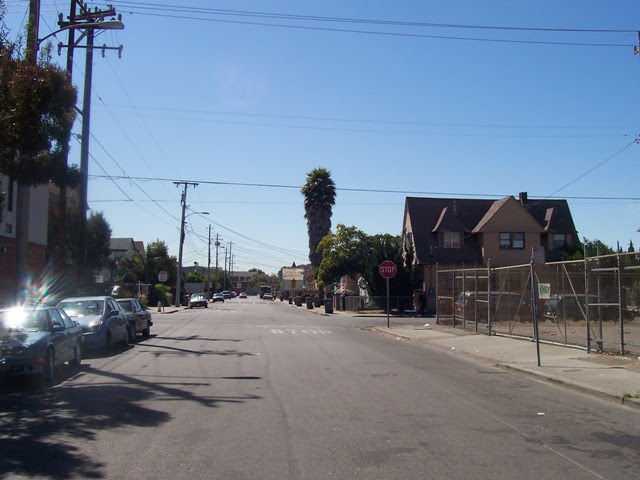 Another tree-named street in West Oakland is Filbert Street. Looking west, there are no street trees. Also, there are overhead wires above one side of the street. Looking east, there are three Honeylocusts, Gleditsia triacanthos, and two Crape Myrtles, Lagerstroemia indica. Compare the two street sections: do you notice the difference made by the presence of a few trees? Imagine a completely tree-lined street. 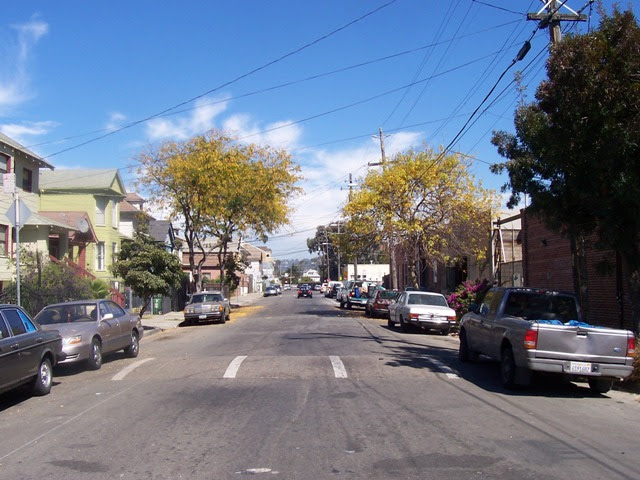 Filbert Street could be infilled with Turkish Filbert (or Turkish Hazelnut), Corylus colurna. The species is not on Oakland’s Official Tree Species List and it is being evaluated for its use as a street tree by the San Francisco Bureau of Urban Forestry and the Friends of the Urban Forest. Ohio State University’s PlantFacts website describes the species as large stature (up to 60-feet tall, 30-feet wide) while Wayne Cahilly of the New York Botanical Garden told the New York Times that the Turkish Filbert will grow up to 40 feet.

Other tree-named streets in West Oakland include Magnolia, Willow, Poplar, Chestnut, and Myrtle Streets. Saint Mary Magnolia, Magnolia grandiflora ‘Saint Mary,’ is an approved species for Oakland, as is Red Horsechestnut, Aesculus carnea ‘Briotii.’ Willow Street could be planted with Australian Willow, Geijera parviflora. There are no poplars or myrtles on the approved list but trees with similar silhouettes could be selected. Columnar varieties of broadleaf deciduous species would mimic the poplar’s silhouette. The Crape Myrtle, L. indica, is not a myrtle (Myrtus genus). However, it shares leaf and flower characteristics with the myrtle like simple, dark green leaves and showy flowers.