Anecdotal and empirical evidence show that urban trees have numerous benefits including the provisioning of ecosystem services, increasing residential and commercial property values, improving attention and well-being, and enabling social ties among neighbors. In a recent lecture talk titled "War and Trees: the destruction and replanting of the urban and peri-urban forest of Sarajevo, Bosnia-Herzegovina," Igor Lacan indirectly highlighted to another benefit of urban trees; I am paraphrasing:

Trees diminish the magnitude of destruction caused by the war. 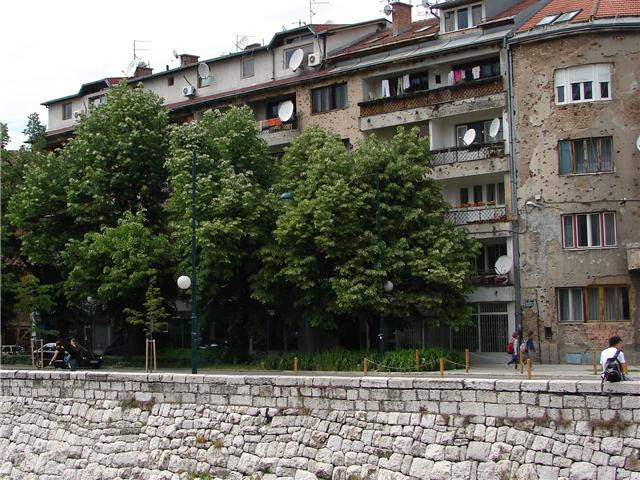 The focus of Lacan's lecture was not this additional benefit of trees; rather, he talked about the damage to urban trees and greenspaces in Sarajevo between 1992 and 1995. More specifically, trees were cut for wood during the siege which blocked access to pre-war energy supplies. Interestingly, the siege lines varied in their proximity to the city so in some areas, city and peri-urban trees were preserved. In terms of the reaction to the energy shortage (food and water were also in short supply), residents first gathered and used wood scraps and debris, then peeled and used bark, then resorted to cutting trees, and finally, dug up and used tree stumps. Residents planted food gardens in front yards (converted back to lawns during the post-war period) and in parks. Sections of some parks were also (permanently) converted to cemeteries as access to pre-war burial grounds were blocked. Finally, areas of hillside woodlands were converted to food gardens, primarily by refugees. To give a scale to the destruction of trees, 76% of the urban tree canopy was removed during the war (from 26,111 trees in a 1992 inventory to 6,117 at the end of the war). Parks' infrastructure suffered more severe damage: 99% of benches were destroyed, 100% of fences were destroyed.

Lacan identified five eras of tree planting in Sarajevo. The first corresponds to the Ottoman Empire. During that period, most trees were located in private yards; these tended to be fruit trees. Poplars were also popular and more closely associated with the mosque and minaret. The first boulevard, street, and park plantings occurred between 1879 and 1918. This period was followed by the urban forest landscapes of post-WWII apartment buildings. The species used included poplar, birch, and spruce. According to Lacan, poplar (Populus spp.) are found in "reduced abundance." Pre-siege the littleleaf and European lindens (Tilia cordata and T. platyphillos) were the most popular species followed by Planetree, Tree-of-Heaven (Ailanthus altissima), and Eastern Planetree (P. orientalis?). In peri-urban areas, pines, hornbeam, beech, and sessile and downy oaks were most popular. Post-siege, remnant woodlands in peri-urban areas are either naturally regenerating with black locusts or are intact, preserved by neighbors during the siege. Lacan noted that the black locust is not a preferred species, but people are loathe to remove any trees because of the destruction that occurred during the war.