An exposed nesting site: in the crotch of a spindly plum tree on a neighborhood street that intersects with a major road in Berkeley. Luckily, the ground floor of the adjacent building is unoccupied. Also, the tree is located in the set-back planting strip of said building. It also helps that the nest is disguised; it does not look like a "typical" nest of twigs, feathers, grass, &c. 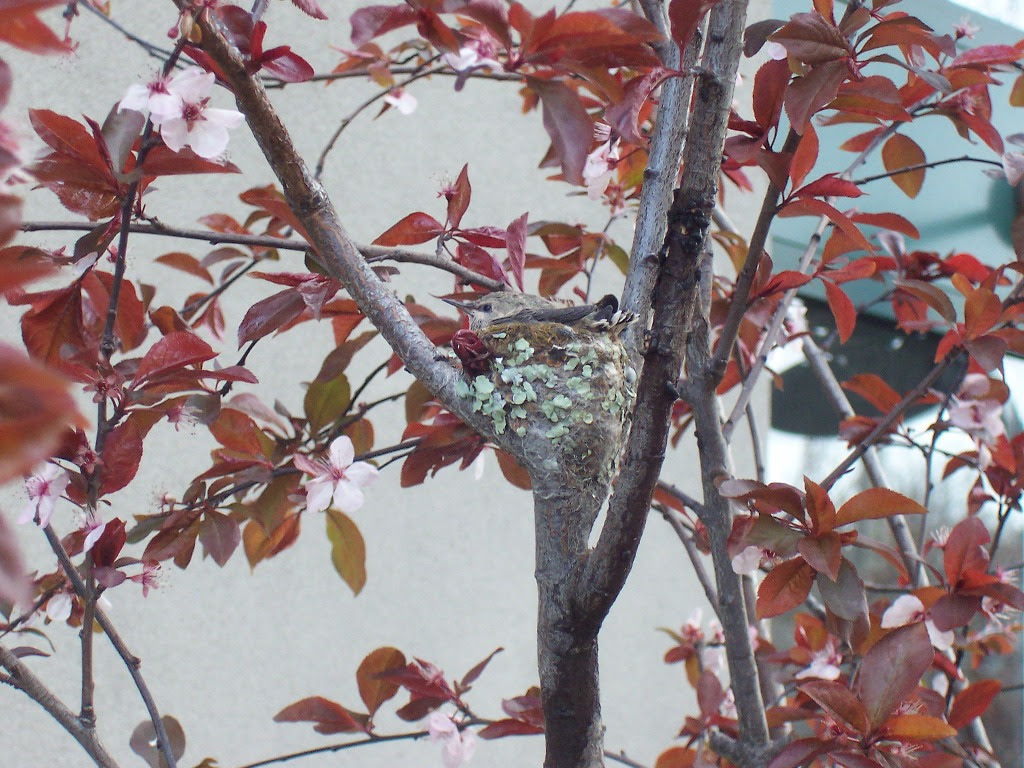 I've been watching this nest and its inhabitants for a few weeks. I've seen the adult and the chicks. How do they all fit into such a tiny house?! I cannot identify the species - Anna's or Allen's? But the nest is called a cup (not house) and is described by Roger Tory Peterson as "a tiny lichen-covered cup in bush, tree" (A Field Guide to Western Birds 1961, 133). This nest description is applied to Anna's, Allen's and several other species. By contrast, the Blue-throated Hummingbird's nest is "a feltlike cup fastened to slender (vertical) support along stream, under bridge, etc. Old nests built higher each year" and the nest of the Violet-crowned Hummingbird is "a lichen-thatched cup in sycamore." Sycamore - how specific; quite like a butterfly.

The chicks are very cute. I know it's a faux pas to anthropomorphize non-human species. Anyway, the usual clutch size for hummingbirds is two eggs and the chicks are "naked and helpless" at hatching. For more information about hummingbirds, search All About Birds - Bird Guide at the Cornell Lab of Ornithology.

Back to the location of the nest. It is literally on the edge - of the sidewalk/ street. In a study of edge sensitivity, Anna's Hummingbird among other species were found to be "edge exploiters," report Jules Evans and Ian Tait in "Introduction to California Birdlife (2005). Edge exploiters, Evans and Tait write "are attracted to these habitat boundaries or occur only where several habitat types intersect" (15). Okay, the edge of the sidewalk/ street is not the type of edge being referred to in the study or the Evans-Tait book. Nevertheless, it was a useful way to introduce this bit of information about the Anna's Hummingbird (if indeed it is an Anna's in the above photograph).