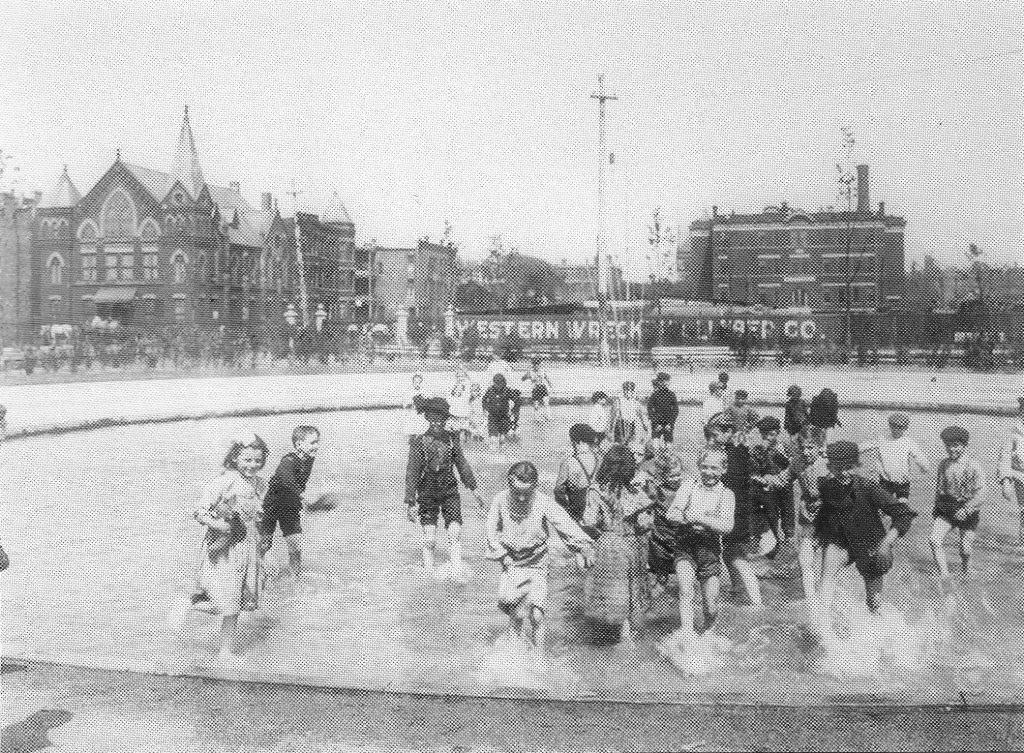 A web search of this Chicago pool yielded a link to Jeff Wiltse's book "Contested Waters: A Social History of Swimming Pools in America" (a limited preview is available at Google Book Search).

Like urban park and playground movements of the nineteenth century, pools were seen to have a positive moral effect on immigrants and other urban poor:

By promoting the "bathing habit" among the urban poor and instilling them with middle-class values, reformers and public officials assumed that municipal pools would help counteract the rising rates disease, crime, and pauperism that accompanied urban growth during the mid- to late nineteenth century (2007, 9).

Not surprisingly, I guess, these *public* pools were segregated. Wiltse makes two distinctions: in more southern cities, pools were formally segregated while in northern cities, white swimmers "enforce" segregation through intimidation and violence. In the book, there is an illustration, a 1940 "WPA Learn to Swim" poster from the NYC Department of Parks that clearly shows white children learning separately from black children. In Chicago, pools were not located in the city's black neighborhoods, known as the "black belt" (63).

Pools were also separated by sex and class. In fact, sex and race overlapped in interesting ways. For example, as women's swimsuits became smaller, i.e. more revealing, there was greater concern about black men swimming with white women. When pools were officially desegregated, whites largely abandoned public pools. (See Professor Kevin M. Kruse's article "The Politics of Race and Public Space" about the abandonment - "political, social, and financial" - of public pools by whites post-war and post-desegregation in Atlanta, Georgia.)

Unfortunately, Google's limited preview does not include Wiltse's conclusion so at this time, I cannot share this with you. Read the book summary provided by UNC Press. Read reviews here (Legal History Blog), here (NYT Sunday Book Review; also read the book's first chapter here), and listen to Wiltse on NPR.