LEQ: How do purpleleaf plums photosynthesize?

First, LEQ is the acronym for local ecologist question. Second, it was inspired by Human Flower Project's HFQ or Human Flower Query. Third, this is our first LEQ. Fourth, we try to provide a, not the, well-reasoned and researched answer but encourage reader contributions! 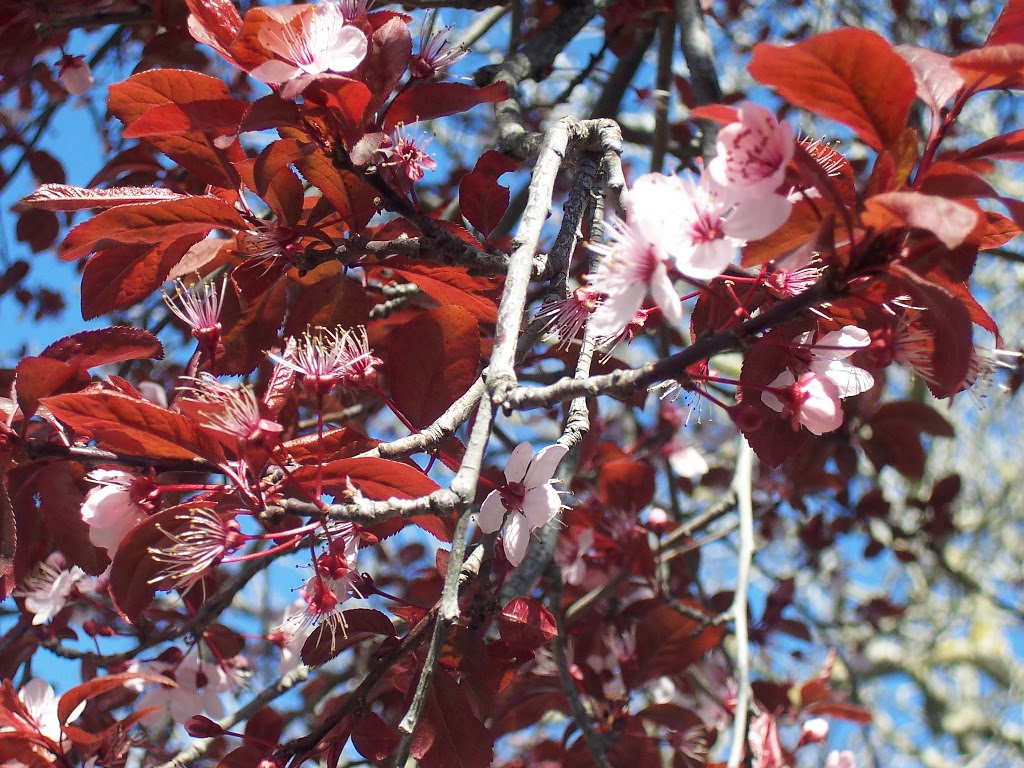 The LEQ was generated in-house (so to speak) as we were returning from an errand. In the course of two weeks, the purple leaf plums have gone from crowns of pink flowers to purple leaves. One of us asked, how do purpleleaf plums photosynthesize without green leaves (chlorophyll is expressed as a green color)?

The other responded that perhaps other pigments, in this case, anthocyanins have photosynthetic capabilities, though less effective than chlorophyll. Anthocyanins are expressed as purple and red (ex: purpleleaf plum or sweetgum and red maple in the fall) while carotenoids (carotenes, xanthophylls) are expressed as yellow (ex: ginkgo in the fall). This guess was inaccurate (and also embarrassing because one of us should/ did know this type of plant physiology).

In the purpleleaf plum (and other non-green leaved species), chlorophyll is present all along. (Chlorophyll reflects certain colors which are expressed as green, while absorbing others.) The quantities in which anthocyanins and carotenoids are present mask chlorophyll. In the fall, as leaves die, "substances that can be reused, such as proteins and chlorophyll, are broken down and taken back into the tree" (Peter Thomas, "Trees: Their Natural History"). Anthocyanins and carotenoids are revealed in the leaves providing "fall color." Interestingly, anthocyanins mix with carotenoids "in different proportions [to] produce the oranges, reds, purples, and sometimes blues" (Thomas).