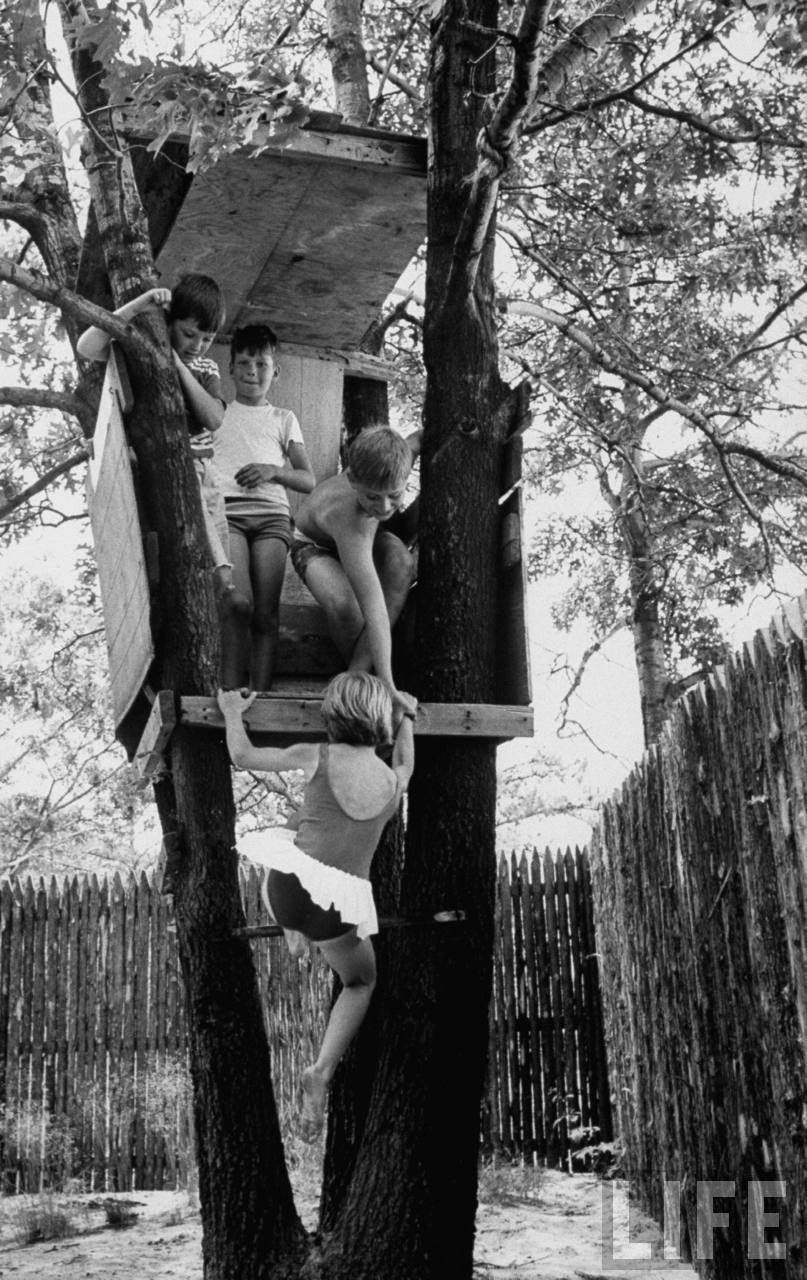 Not knowing the origins of the tree house, I turned to the web and J. B. Jackson. Several online dictionaries define tree house as "a playhouse built in the branches of a tree" or more generally, "a structure built among the limbs of a tree, usually for recreation." Wikipedia did not provide any information on the origin of the tree house but did provide a link to The Treehouse Guide, a building and reference website. Unfortunately this website does not offer an origins story. I don't own The Treehouse Book by Peter Nelson, Judy Nelson, David Larkin, Paul Rocheleau and it is not available at my local library. 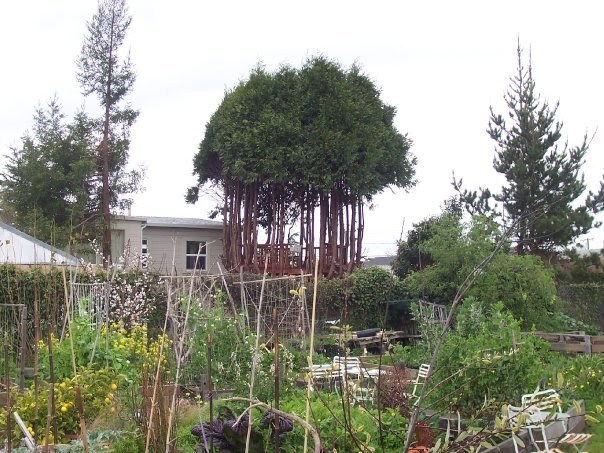 On to J. B. Jackson, landscape geographer and historian particularly of the vernacular or everyday American landscape. Jackson's 1994 tree essay is titled "In Favor of Trees." Although he does not mention the tree house, what he does mention might be a clue to its origins. He begins the essay thus:

Like millions of other Americans I have no great liking for wilderness and forest, but like the majority of Americans I am fond of trees: individual trees, trees in rows along the street or in orchards, trees in parks.

We like being among trees, so why not literally be in a tree?! Might the tree house have evolved out of sitting on a wooden wrap-around tree bench or dancing around a maple, hawthorn, or birch at a Maypole festival? 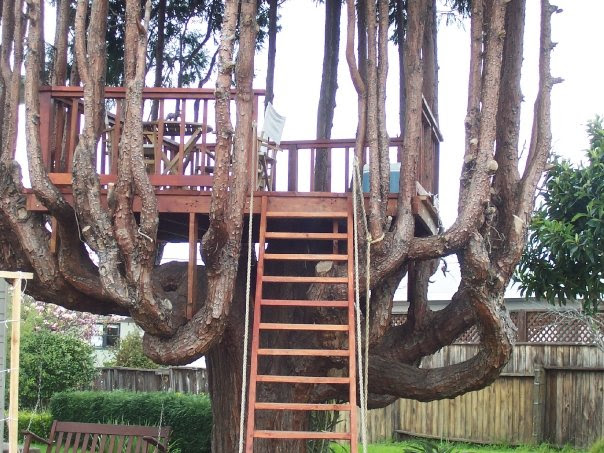 What else does Jackson tell us? Towards the end of "In Favor of Trees" he argues for experiential relationships with trees.

The contemporary forest experience emphasizes the visual [his emphasis] aspect, the scenic, the ecological, the photogenic. We are not the touch, much less pick up or carry away, any object we find of interest. We are tactfully told that we are not at home but in a museum....For the fact of the matter is humanity's closest and most productive relationship with nature derives from personal, physical contact, and from a desire to appropriate whatever attracts us. 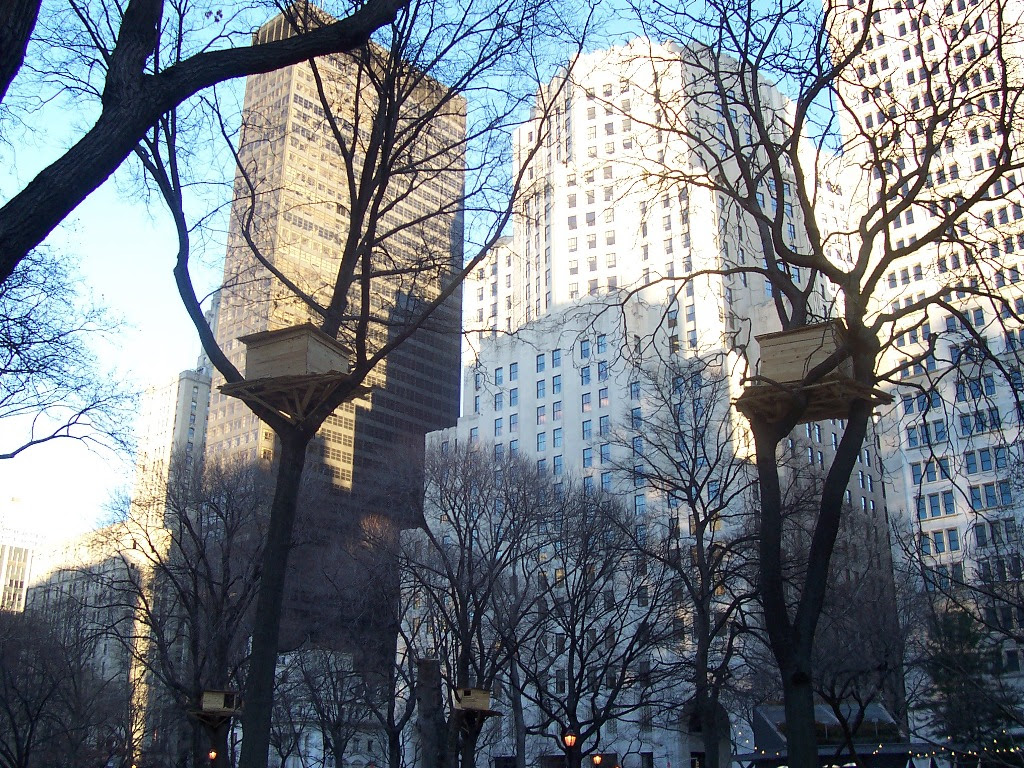 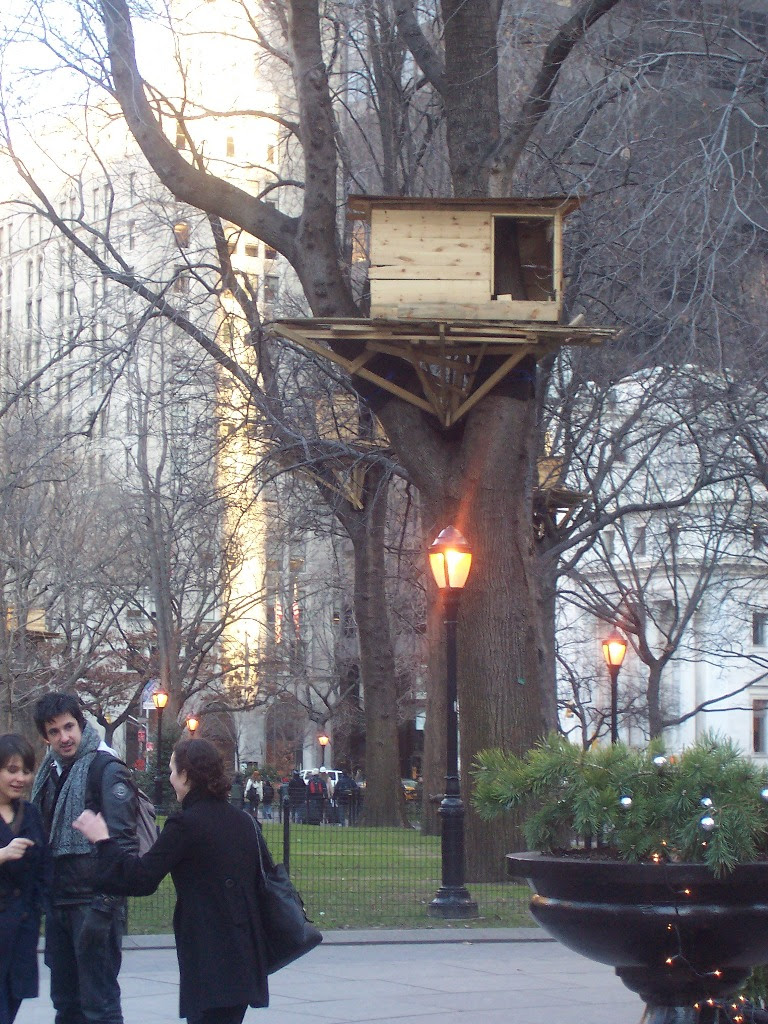 The tree house as art is a museum-type piece. We saw the Tadashi Kawamata "Untitled (Tree Huts)" 2008 installation in Madison Square Park in January 2009. These tree houses (huts) are not accessible for "personal, physical contact," but the installation is definitely visually engaging and photogenic. Kawamata was an artist-in-residence with Mad. Sq. Art, a project of the Madison Square Park Conservancy. Reactions to the sculpture are mostly positive (intrigued by the concept): Tadashi Kawamata's Tree Huts at The Landscape, Tadashi Kawamata Builds Tree Houses in New York City at Smithsonian.com, A Tree Hut Grows in Manhattan at Gothamist, and New Public Art Insanity: Tree Houses in Madison Square Park at Curbed. Here is Mad. Sq. Art has on Kawamata's tree huts:

Tree huts in particular are an emerging focus of Kawamata’s work; a crystallization of Kawamata’s interest in the architecture of shelter and of the insertion of private objects into public spaces as a method of renegotiating the meaning of both. 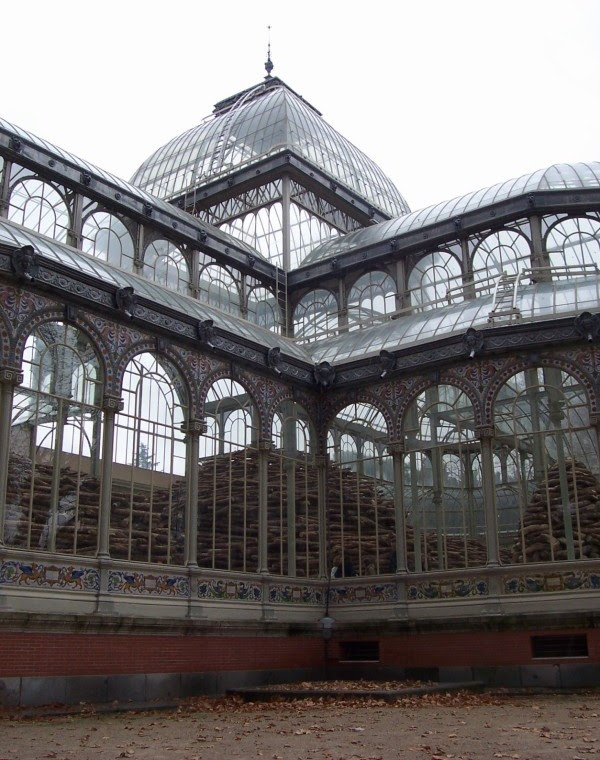 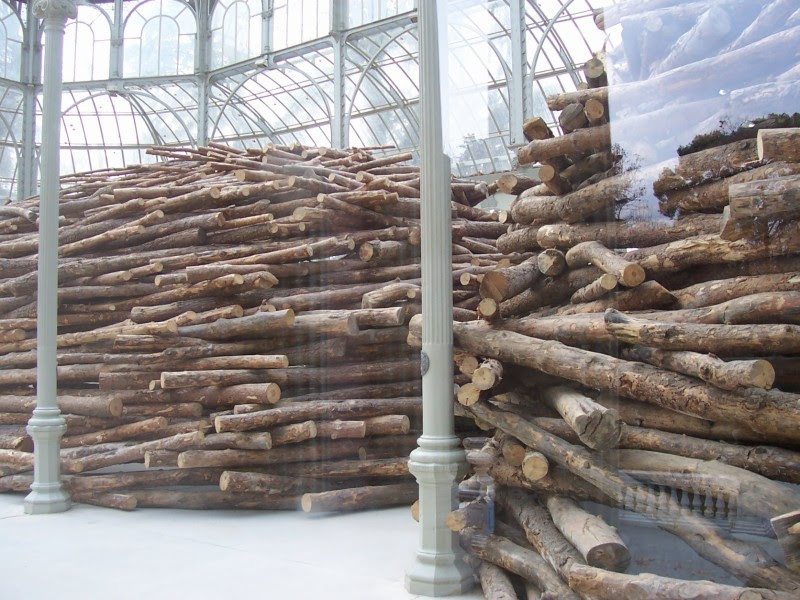 Finally, the wood domes of Andy Goldsworthy which are not so much tree houses as tree rooms. We saw the "En las entranas del arbol" exhibit at the Museo National Centro de Arte Reina Sofia, en el Palacio de Cristal, Parque del Retiro in December 2008. No touching and no photographs were allowed (the photographs were taken from the exterior of the palacio/ museo), but you were allowed to go inside the domes. The feeling was of being in a forest, inside a tree. I could smell the bark and sap (the trees used were "already harvested" Scots Pine from a timber operation north of Madrid). Goldsworthy describes his 1983 experience inside a hole in a sycamore tree as "being in the stomach of the tree." The architecture of the domes mirror the architecture of the palacio: "a glass epidermic, a layer in the growth principle that radiates from the centre." 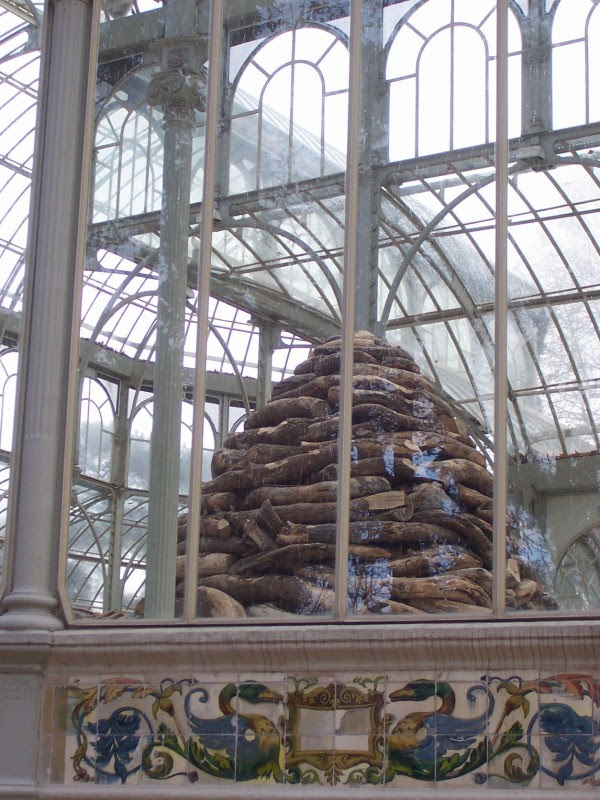