About the Ginkgo biloba 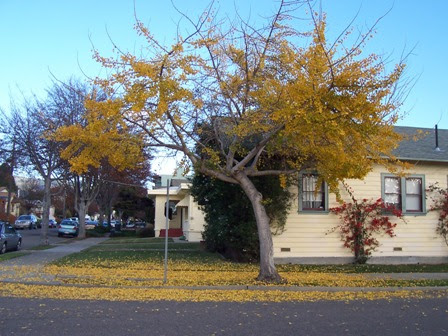 A friend's dad is on sabbatical in Manhattan. He's an art professor at a liberal arts college in Ohio. The Ginkgo is one of his favorite trees; I noticed several ginkgo-themed drawings tacked unto to the wall in his office. At a recent dinner, he told me that he had noticed that the Ginkgo is a common street tree in the city. He wanted to know why this was the case. Also, he wanted to know about the tree's reproductive strategy; he had heard that there are separate male and female trees. Here's what I told him.


In my estimation, the most common street trees in NYC - in no particular order - are London planetree, Ginkgo, honeylocust, maple (red or Norway), and oak (red or pin). I missed one; the Callery pear! Learn more about the city's street tree population in the Parks Department's 2005-2006 Street Tree Census.

The Ginkgo is a great street tree because it is hardy; it tolerates well the various limitations of the urban environment. Also, it is a long-lived, albeit slow-growing, species. Arthur Plotnik writes,


By the 1900s, ginkgoes had shown urban planters their ability to survive pests, drought, storms, ice, city soils, and some pollution. Architect Frank Lloyd Wright's favorite tree, it made its way into city landscapes across North American, as happy in southeastern Canada as in New Orleans.


The fruit of the female ginkgo has a bad reputation. When bruised, the smell is malodorous. The Ginkgo is dioecious; male catkins and female flowers are on separate trees. Monoecious species have both male and female organs on the same plant. Although the fruit's smell leaves something to be desired, the leaves and nut are highly desired. The former for medicinal purposes and the latter for culinary purposes. A web search revealed that the Ginkgo biloba extract or GBE is taken from the leaves. The nuts were featured in an Gourmet.com article titled Gathering ginkgo nuts in New York.


Instead—egged on by the conviction that the elderly Asian ginkgo fruit gatherers who had originally motivated me had to be on to something worthwhile—I started in on four days of ginkgo nut experiments. Based on a recipe from the grill cook at Masa, I boiled them in a tiny bit of salted water and put them on a salad. I roasted them with maple syrup. I roasted them in the shell, and then served them with a little bit of salt. But nothing was working: They had a gummy texture, and their rich, nutty flavor was curbed by a quick bitterness. Then, using my Cajun husband’s motto that all things taste good fried, I egg-washed them, rolled them in flour, salt, and pepper, and threw them in hot oil. My husband and I watched them immediately turn a brilliant, beautiful jade-green color under their light layers of fry. I beamed. I felt like I’d just harvested my first backyard zucchini crop or caught my first fish from a nearby river. Even before we popped the little fried pips into our mouths and tasted the perfectly charming balance of nature’s nuttiness and searing hot oil, we knew we’d done it—we’d amped up our already ridiculous game of seasonal and local eating. And so, naturally, we stood there chomping away in our tiny urban kitchen and started working the fried ginkgo nuts into our Friday night dinner party menu.

By the way, the Ginkgo's fruits are ready for picking in the fall, but a tree might not flower until it is 20 years old (UConn Plant Database; Wisconsin Master Gardener Program)!