It's blooming inflorescences outside

So what is an inflorescence?  It is the arrangement of flowers into clusters (H.D. Harrington, How to Identify Plants).  The inflorescences of the Callery pear (Pyrus calleryana) and the cherry (Prunus 'Kwanzan') are two of the first arboreal signs of spring in the city.

Writing in The Urban Tree Book, Arthur Plotnik (yes, this is our go-to urban tree book) describes the Callery pear as "a charming, widely used, [but] controversial street tree."  Why is such a beautiful tree controversial?  In a play on words, the pear is literally and figuratively a blooming tree.  When might the Callery pear be figuratively blooming?  One might hear the Callery pear referred to as a "blooming" tree (where blooming is used as a swear word) when the tree drops its limbs.  The Callery pear is notorious for its weak branching structure.  Here is the University of Florida IFAS Extension description of the branching structure of the Bradford Callery pear (P. calleryana 'Bradford'), an early cultivar:


'Bradford' is the original introduction of Callery Pear and has an inferior branching habit when compared to other cultivars which have since been developed. It has many vertical limbs with embedded bark packed closely on the trunk and grows about 40 feet high by 30 to 45 feet wide but the crown is dense and the branches long and not tapered, making it quite susceptible to wind and ice damage and other breakage. 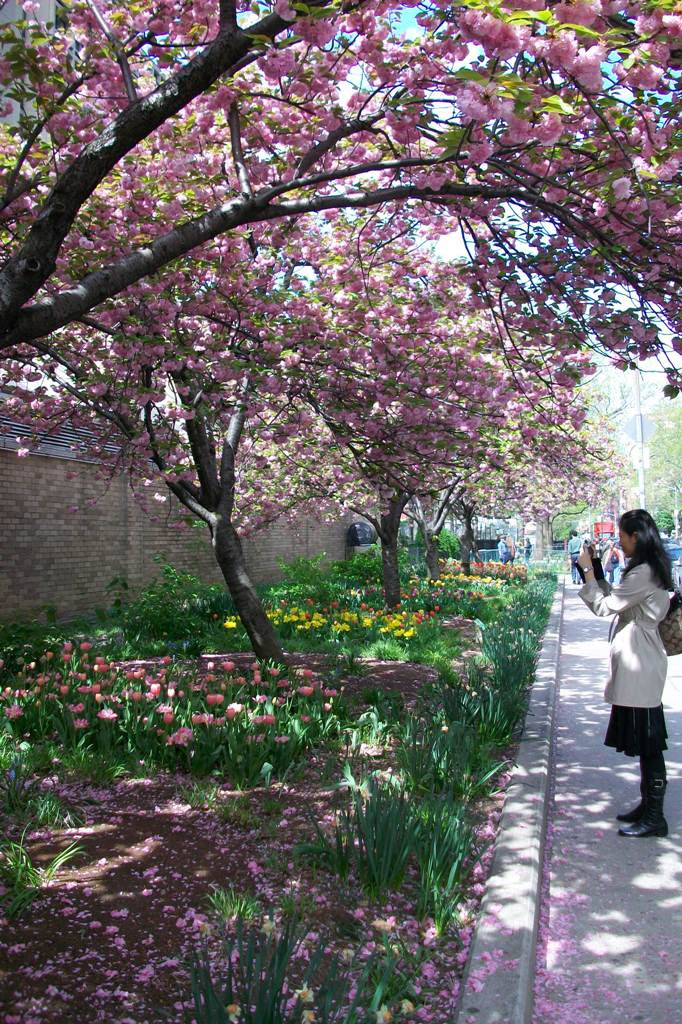 But right now, the Callery pear and the cherry are literally blooming; gracing our sidewalks with showy and in the case of the pear, strong-smelling flowers.  Plotnik describes the smell as "acrid."  The pear's inflorescences are "corymbs of about 3" in diameter" (UConn Plant Database) while the cherry's are "pendulous clusters of 3-5 blossoms, each blossom 2-1/2" across" (Plotnik).  Enjoy!