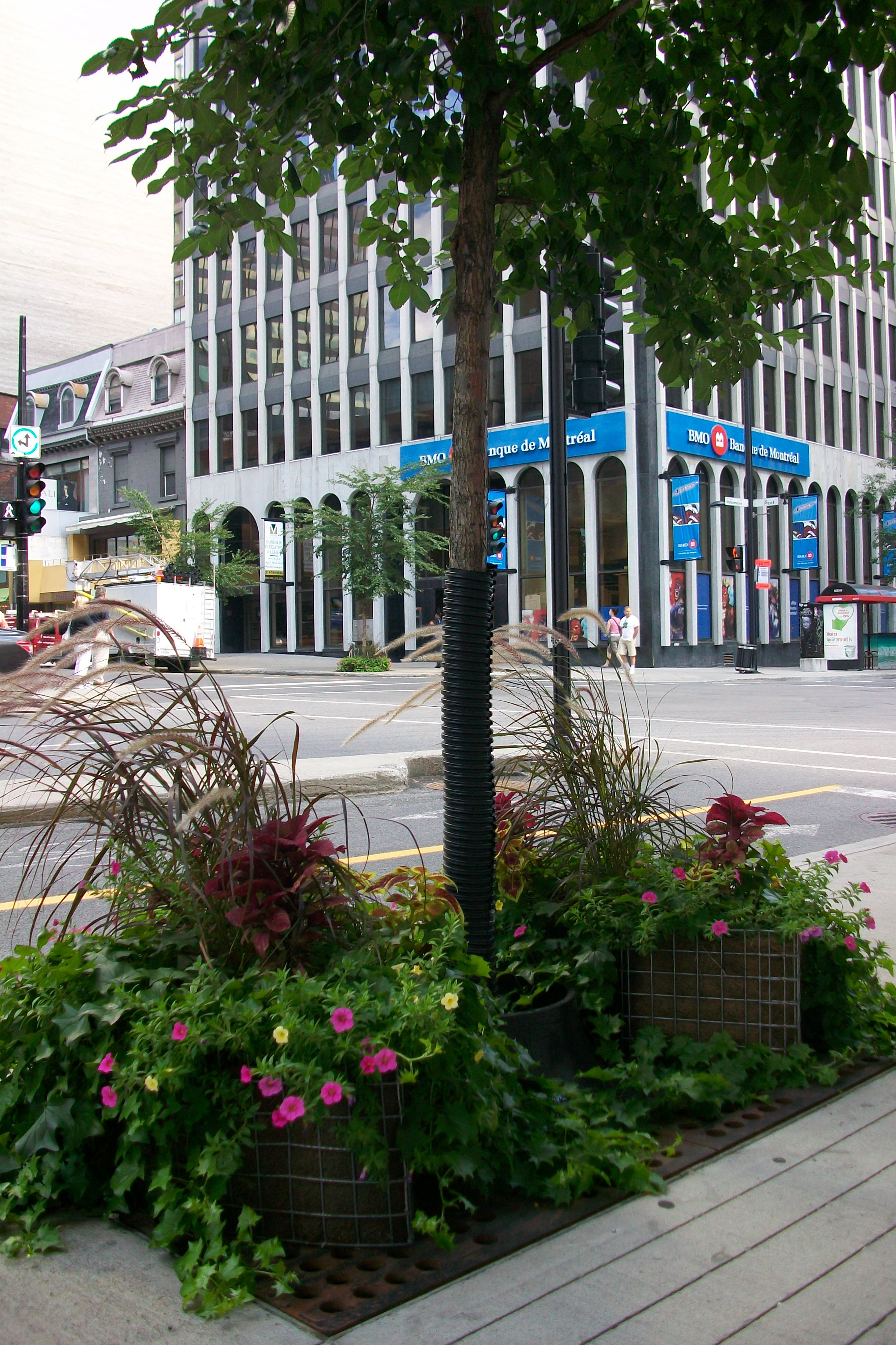 Instead of a wholly traditional tree tour, we present several tree spaces we observed while visiting Montreal.  First, we enjoyed the street tree gardens in downtown Montreal. 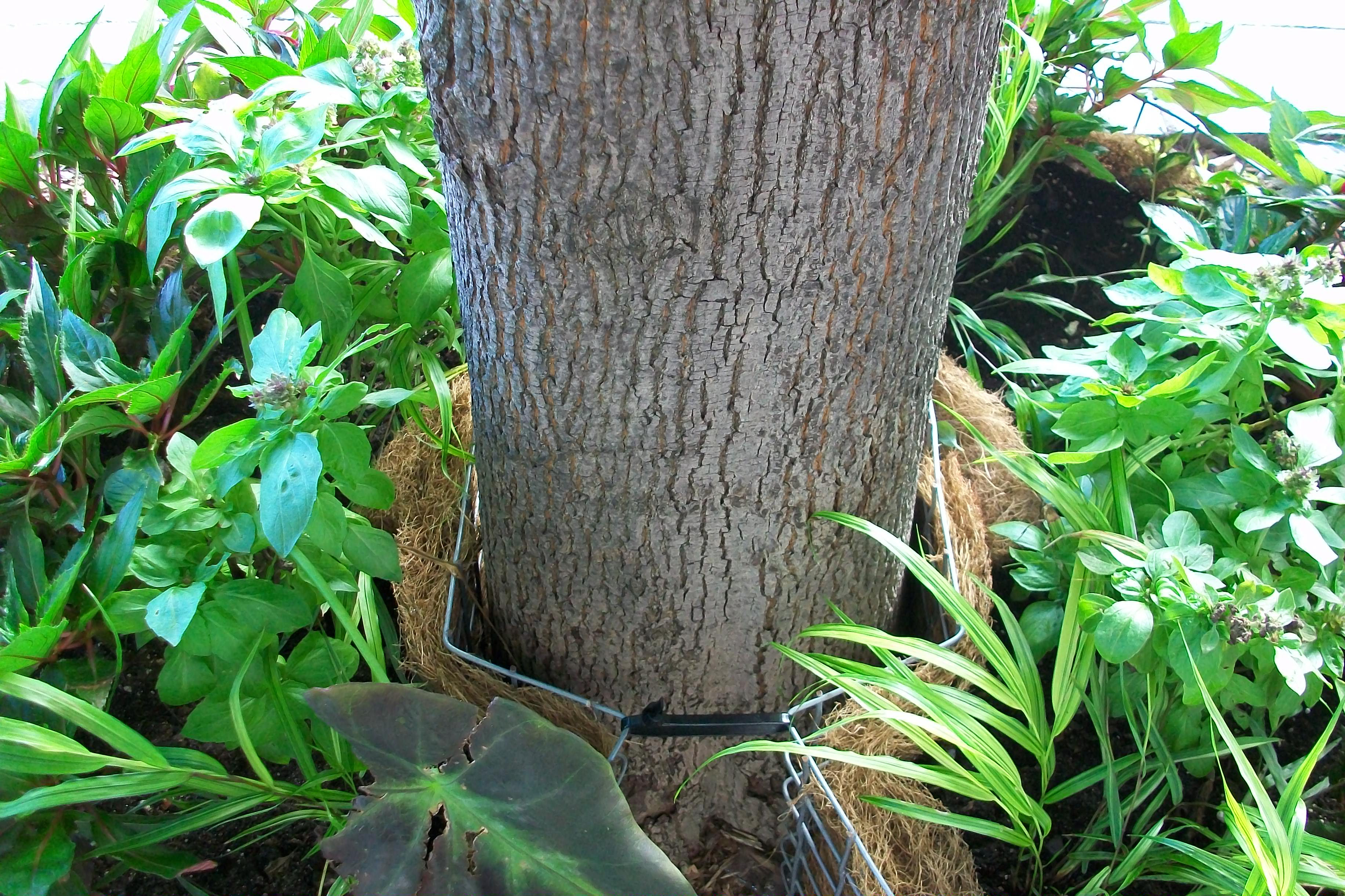 The gardens are installed on top of the existing soil (instead of mounding soil to create new planting areas).  Wire baskets are lined with hay and filled with soil.  The baskets (a pair or four) are placed around, not against, the trunk and attached to each other with plastic ties.  The gardens might be in response to the City's recommendation to "plant vegetation at the base of trees to help keep the soil moist." 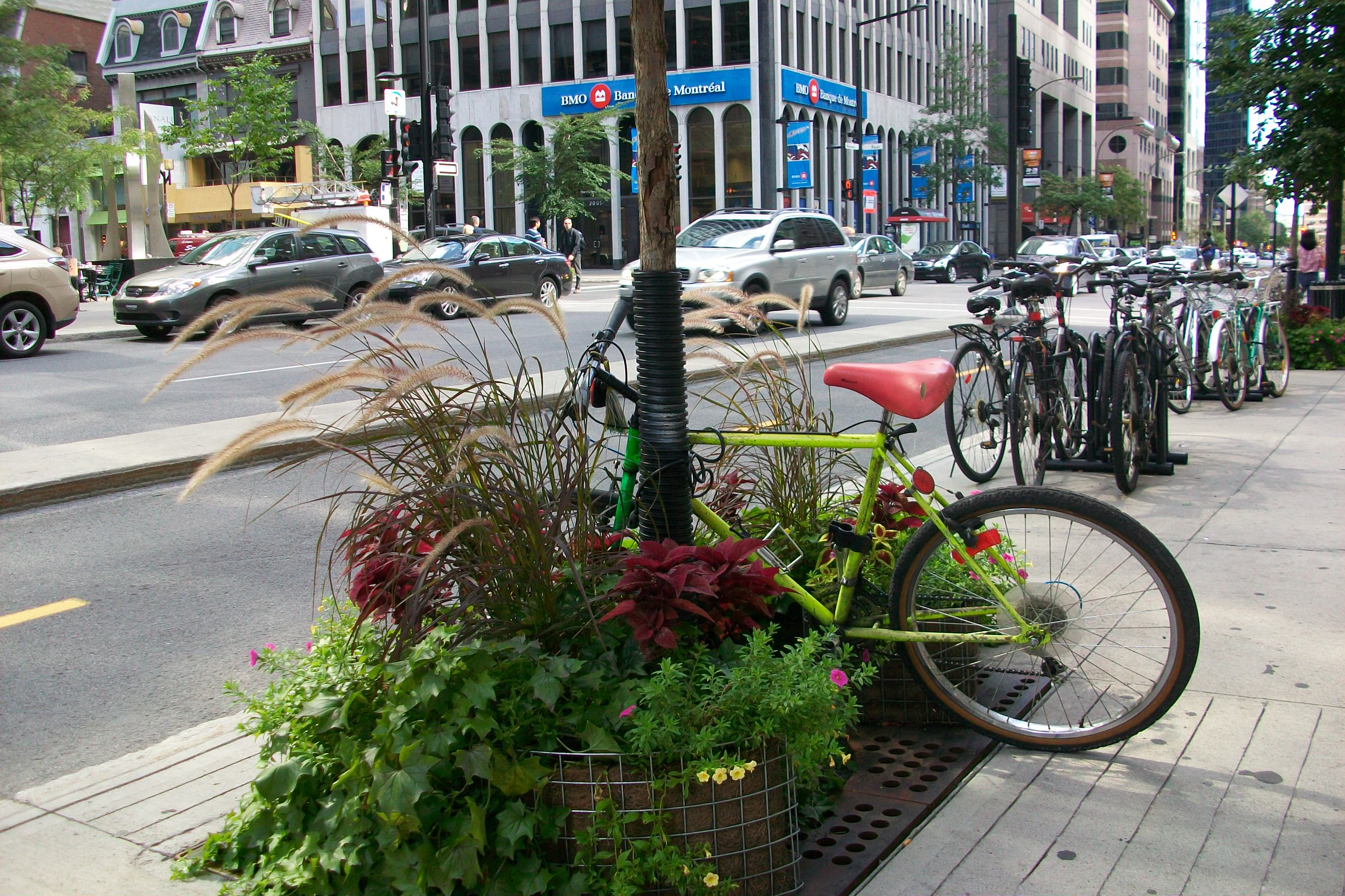 We also liked that the trunks of small trees were protected from bicycle chains by installing plastic tubing around the trunks.  On its Nature in the city Web page, the City of Montreal urges residents to "avoid hanging bicycles or other objects from trees, or nailing into or otherwise damaging the bark. 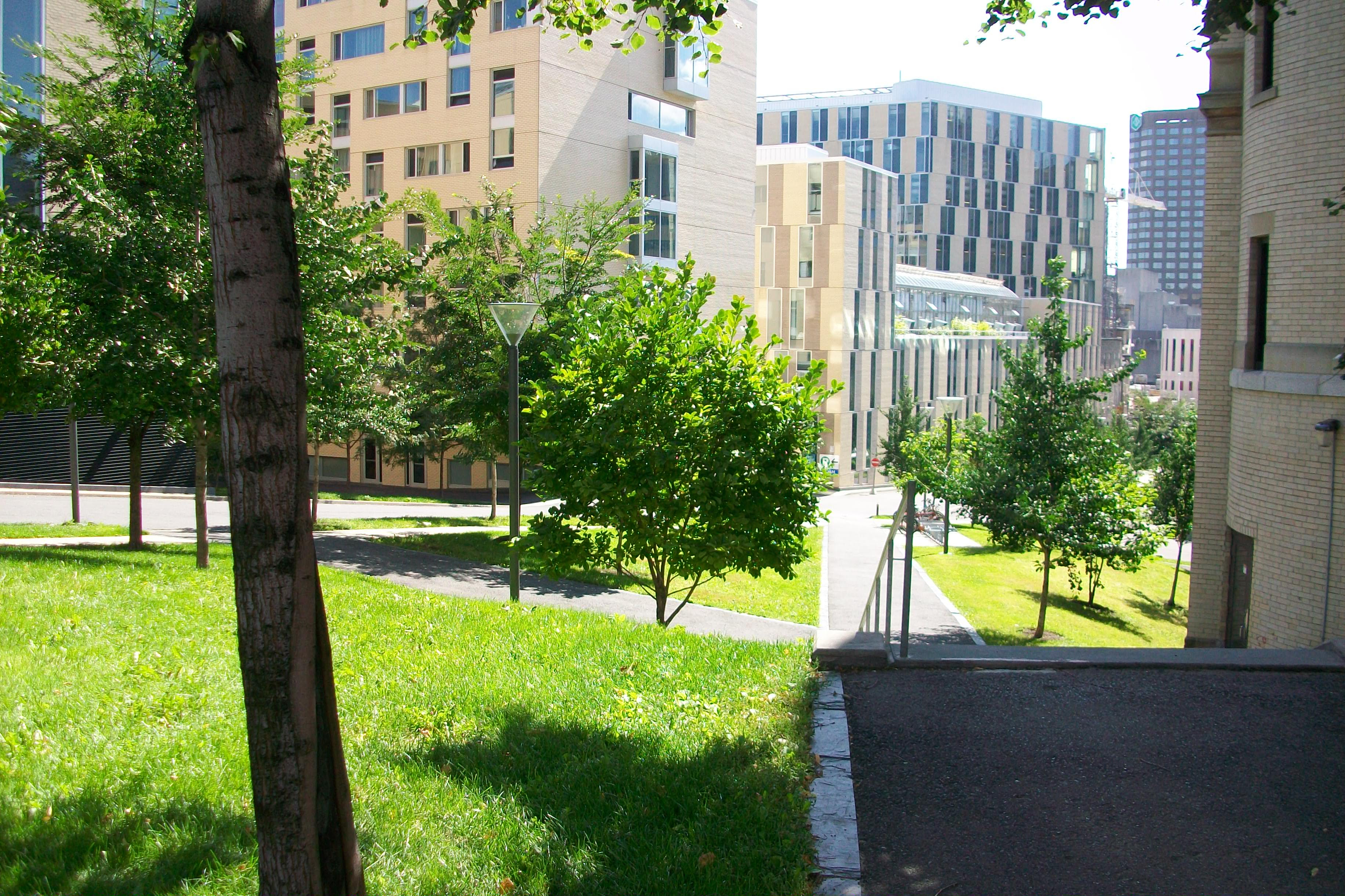 On our way to the Plateau neighborhood, we walked by this stepped plaza on the UQAM's campus (Universite du Quebec a Montreal)on Rue Sherbrooke Ouest.
We also strolled though the McGill University campus with Bronwyn Chester's "A Leafy Legacy: The Trees of McGill University."  Unable to attend Bronwyn's guided tour of Parc du Mont-Royal, we purchased her guide at the university book store and walked by several trees including no. 50 - English hawthorn (Tour II) which can be seen in the photographs below

Finally, we noticed colorful bird houses installed in street and park trees. It is unclear if the bird houses are art or habitat (we have not found any information online).  The one below is located at Place du Canada on Boulevard Rene Levesque. 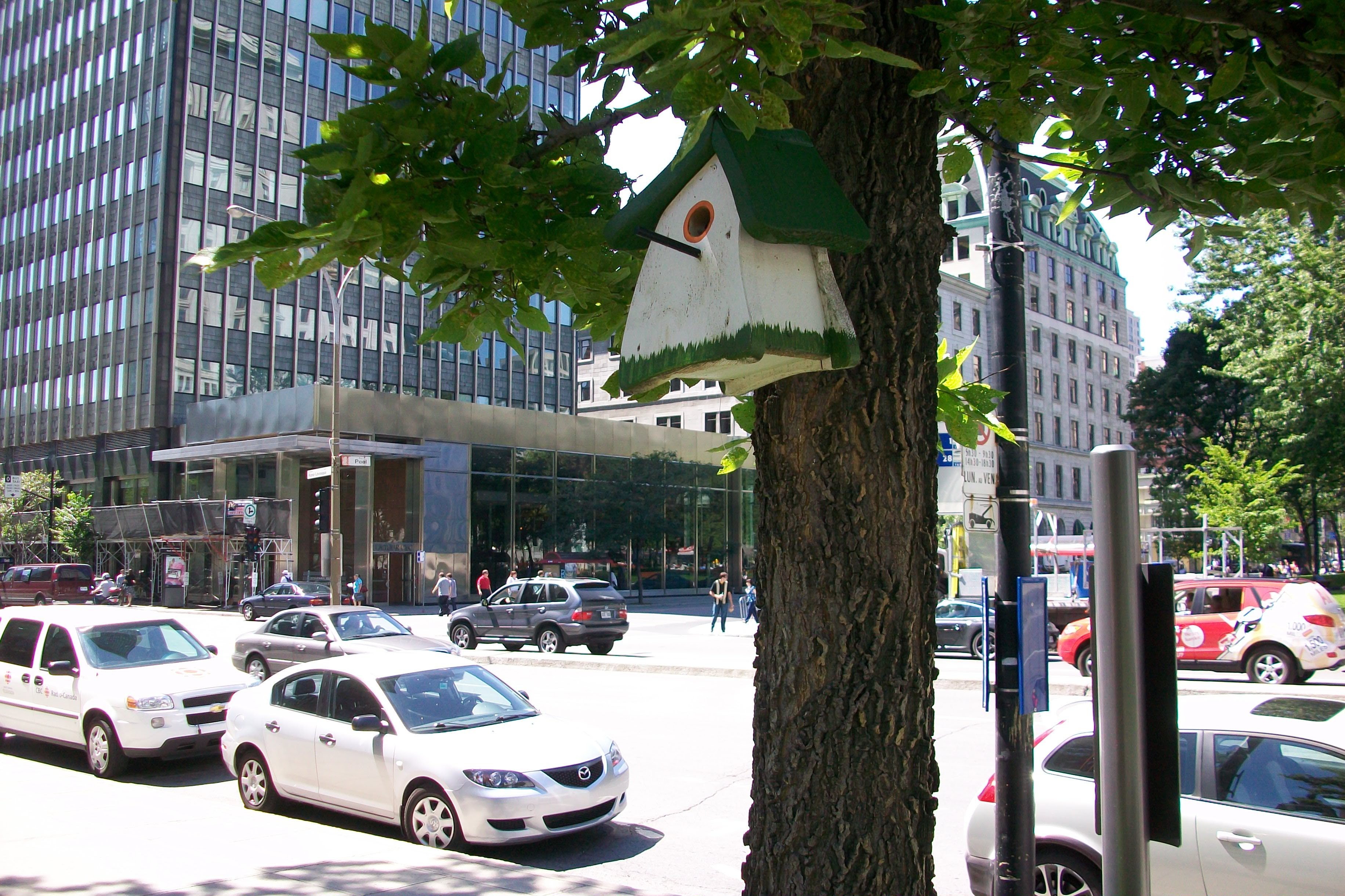