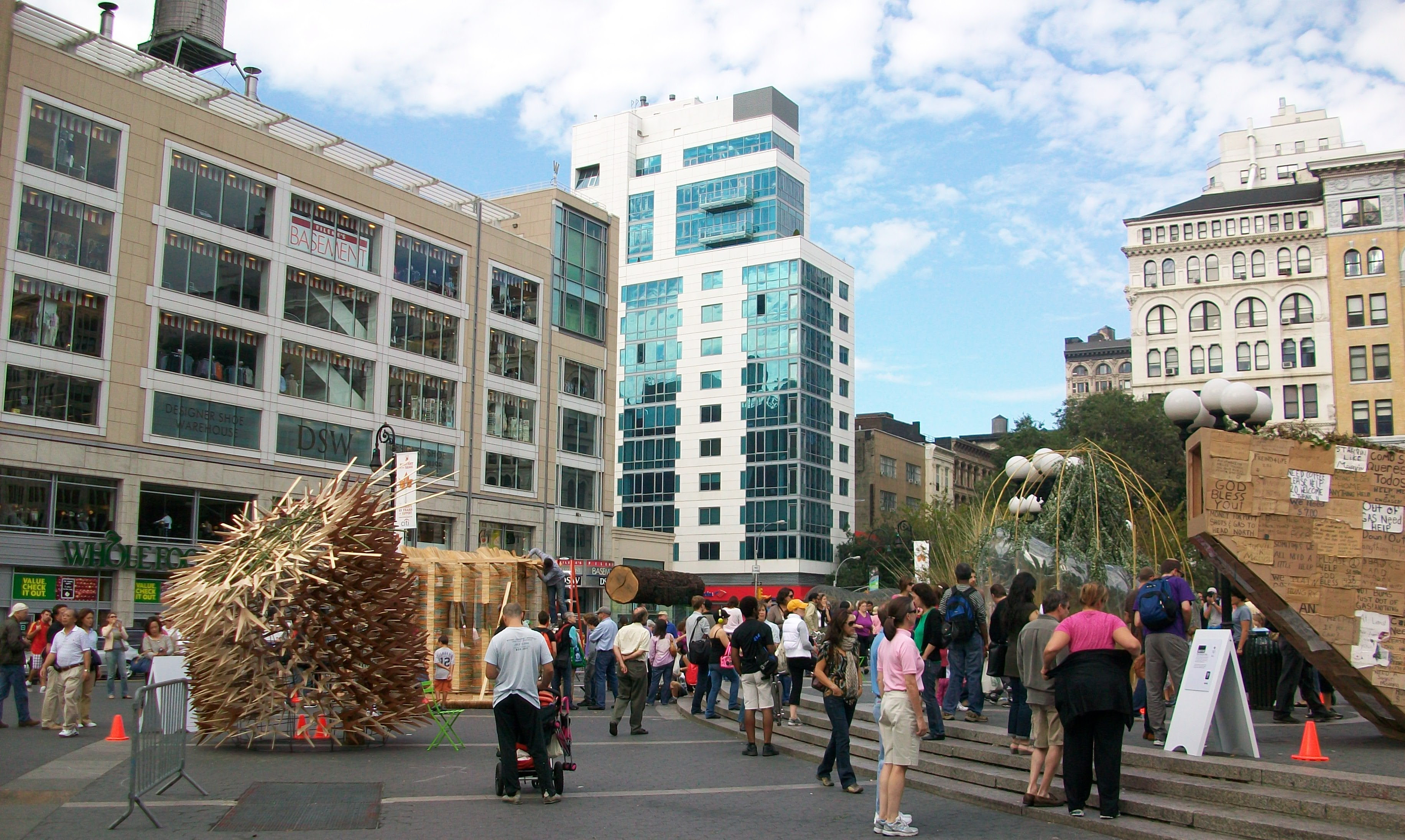 A dozen sukkahs were on display on September 19 and 20 in Union Square Park. 600 designers entered the Sukkah City international design competition.  12 finalists were selected. 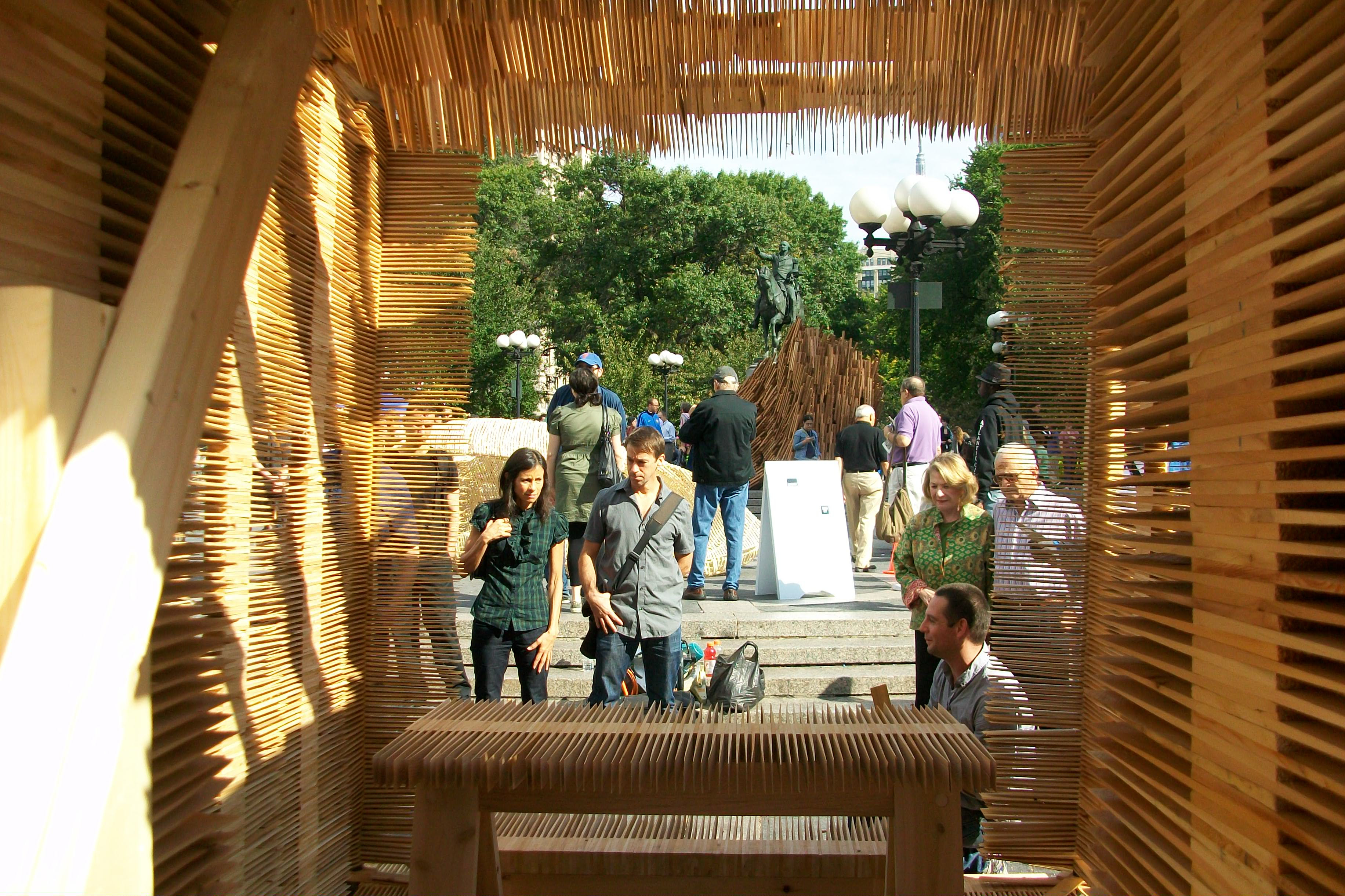 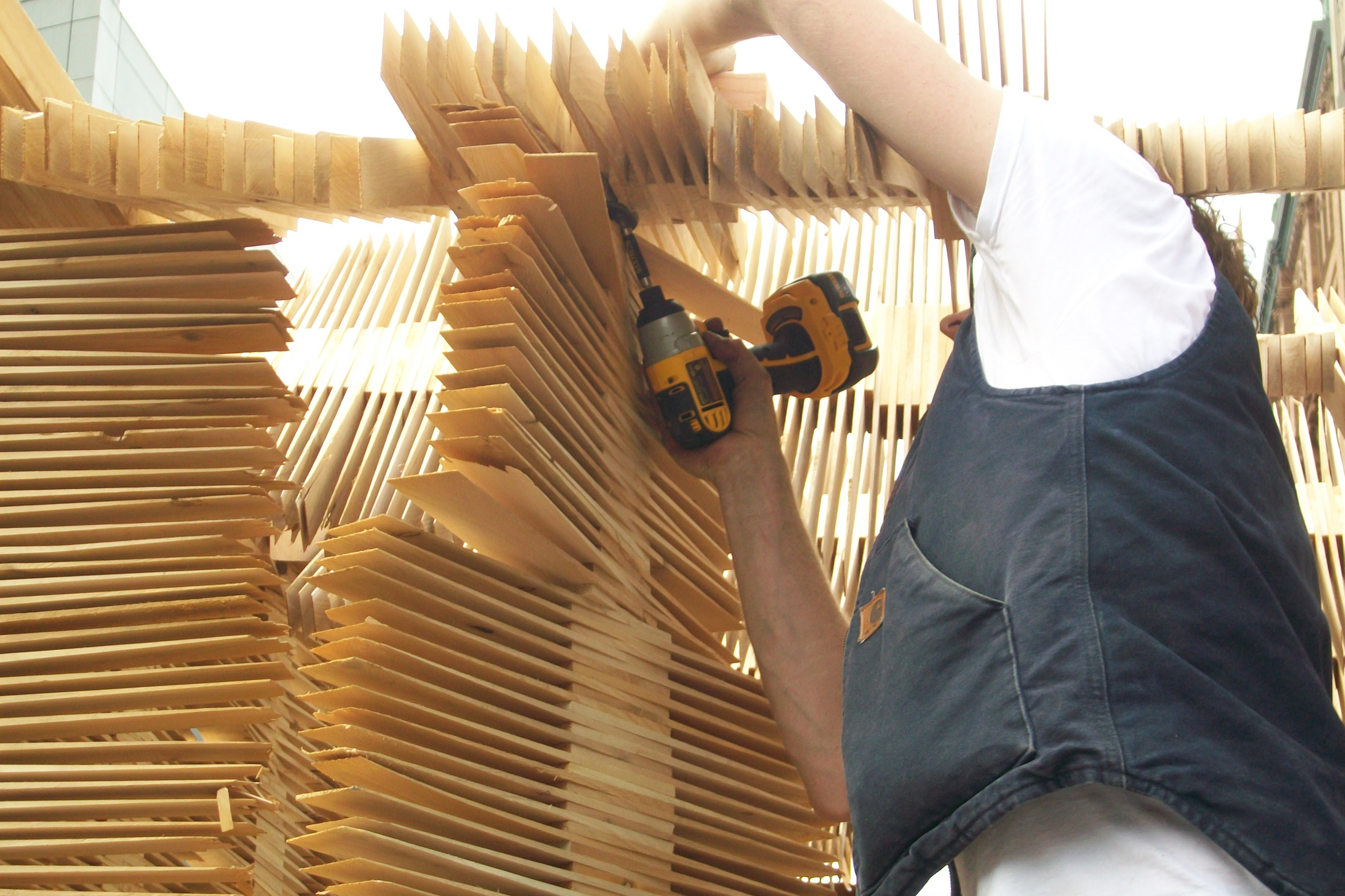 We went to the Sukkah City village on the first day.  One of the sukkahs, Shim Sukkah by Tinder, Tinker of Sagle, Idaho was still being constructed; it is our favorite.  The designers used unassuming wooden shims to create an intricate and beautiful structure.

A sukkah, quoting the Sukkah City poster, is


Biblical in origin...an ephemeral, elemental shelter, erected for one week each fall, in which it is customary to share meals, entertain, sleep, and rejoice....the sukkah's religious function is to commemorate the temporary structures that the Israelites dwelled in during their exodus form Egypt....The Sukkah is a means of ceremonially practicing homelessness.... 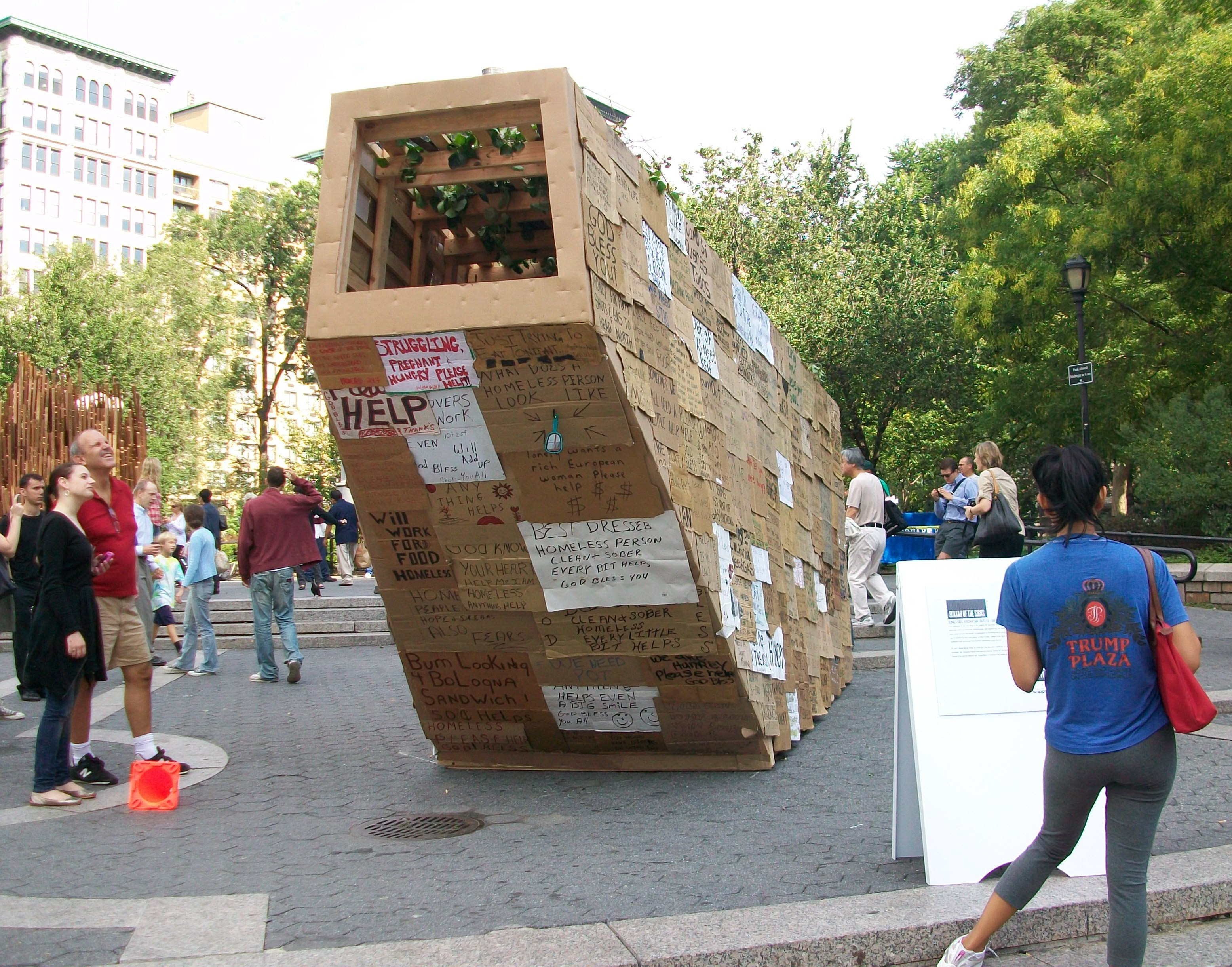 Ronald Rael and Virginia San Fratello's Sukkah of the Signs is a literal interpretation of "practicing homelessness." Sukkah of the Signs is "clad with cardboard signs purchased from destitute individuals across the U.S."  (Proceeds from the Sukkah City auction will benefit Housing Works.)  Most viewers of this sukkah spent several minutes reading the signs on the sukkah's exterior.

There are specific rules for constructing a sukkah.  Again, quoting the exhibit's poster:


The structure must be temporary, have at least two and a half walls, be big enough to contain a table, and have a roof made of shade-providing organic materials through which one can see the stars.

The guidelines do not provide a maximum area, but the New York Department of Buildings does not consider a structure larger than 19 feet x 8 feet to be temporary.  More construction details can be found here. 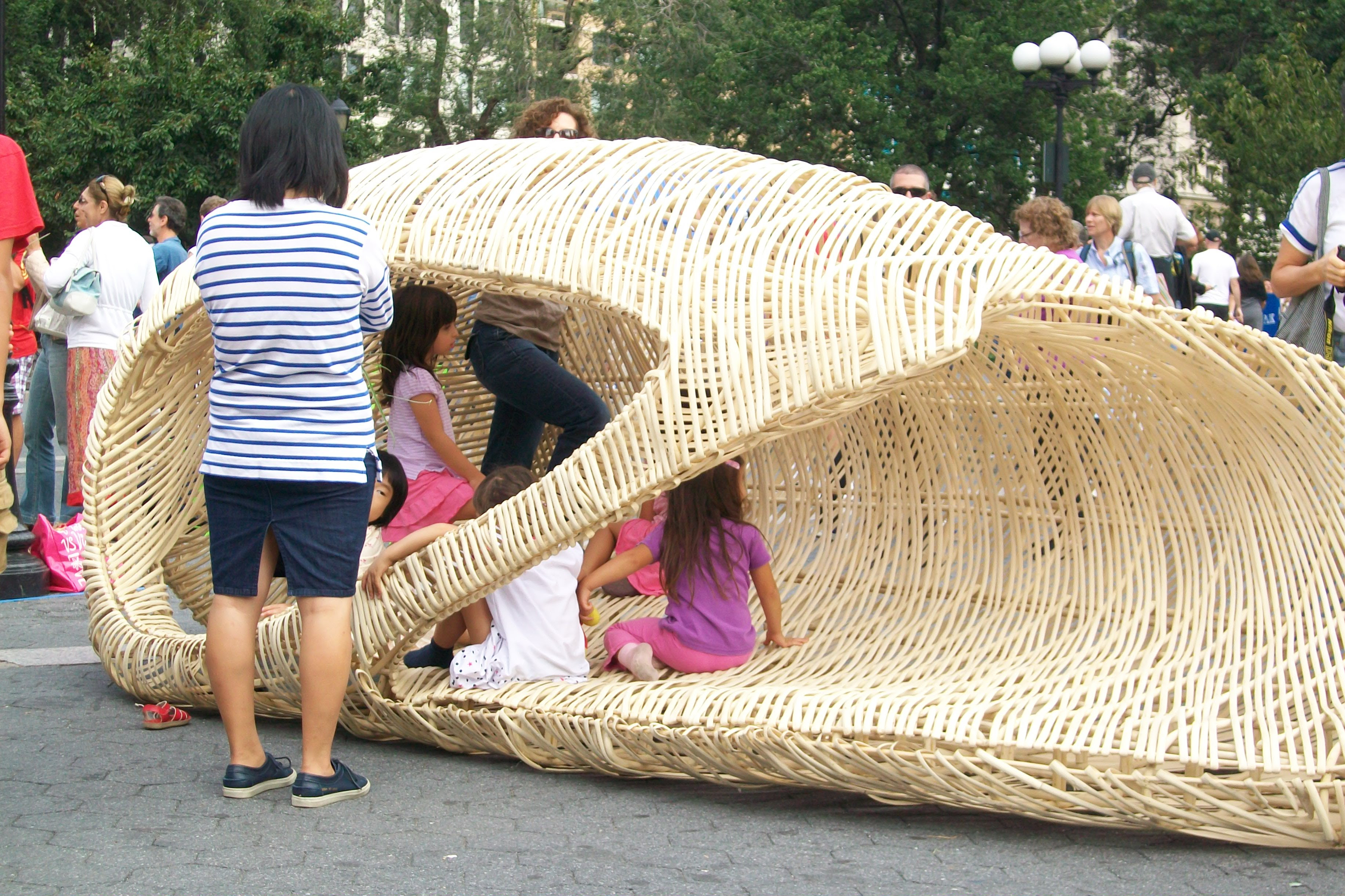 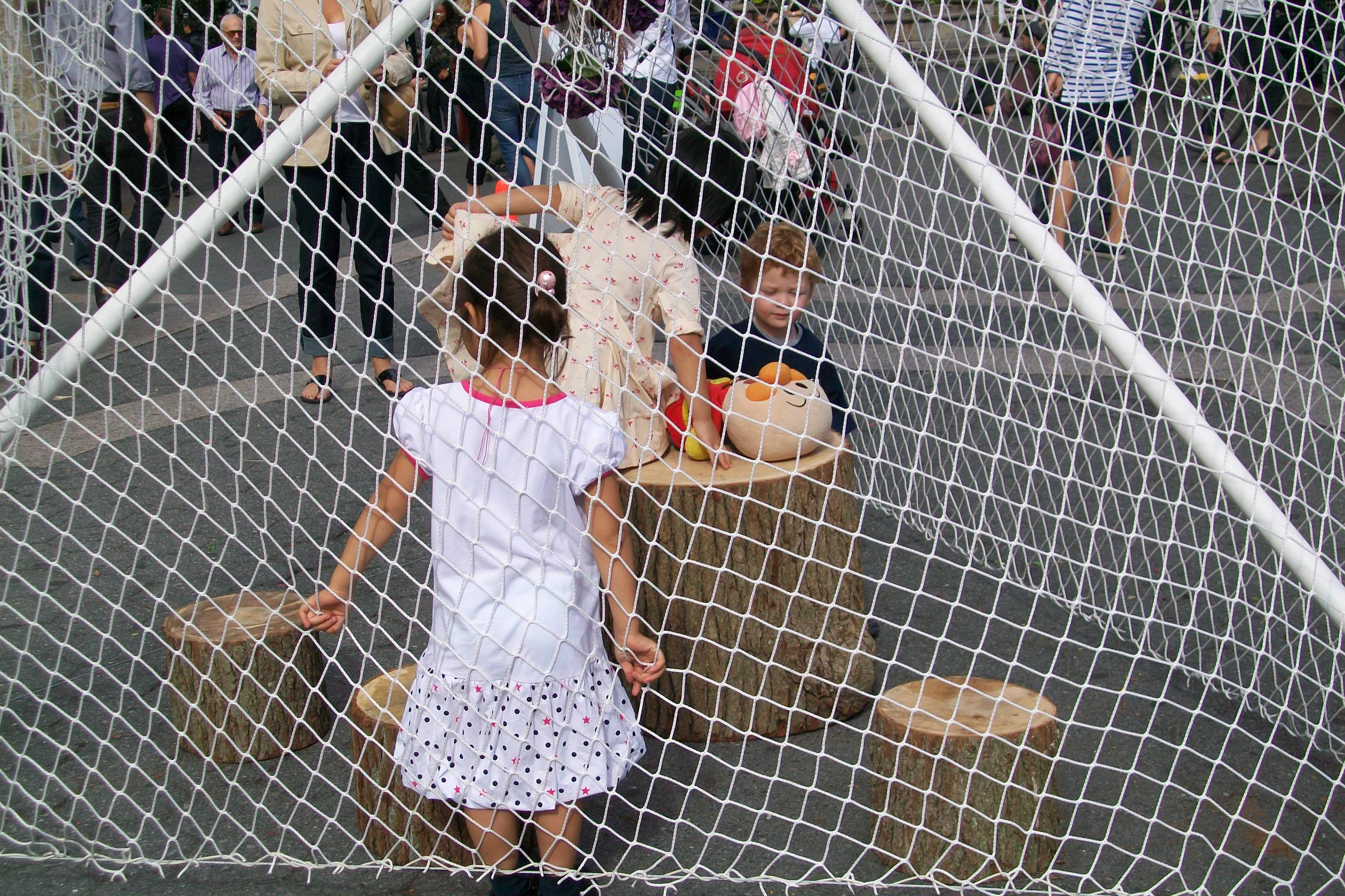 Children at the exhibit enjoyed sukkahs that provided climbing and lounging features such as Star Cocoon by Volkna Alkanoglu of Los Angeles and In Tension by SO-IL of Brooklyn.  The interior space of the latter was quite limited but the space was large enough to hold a short-log table and chairs. 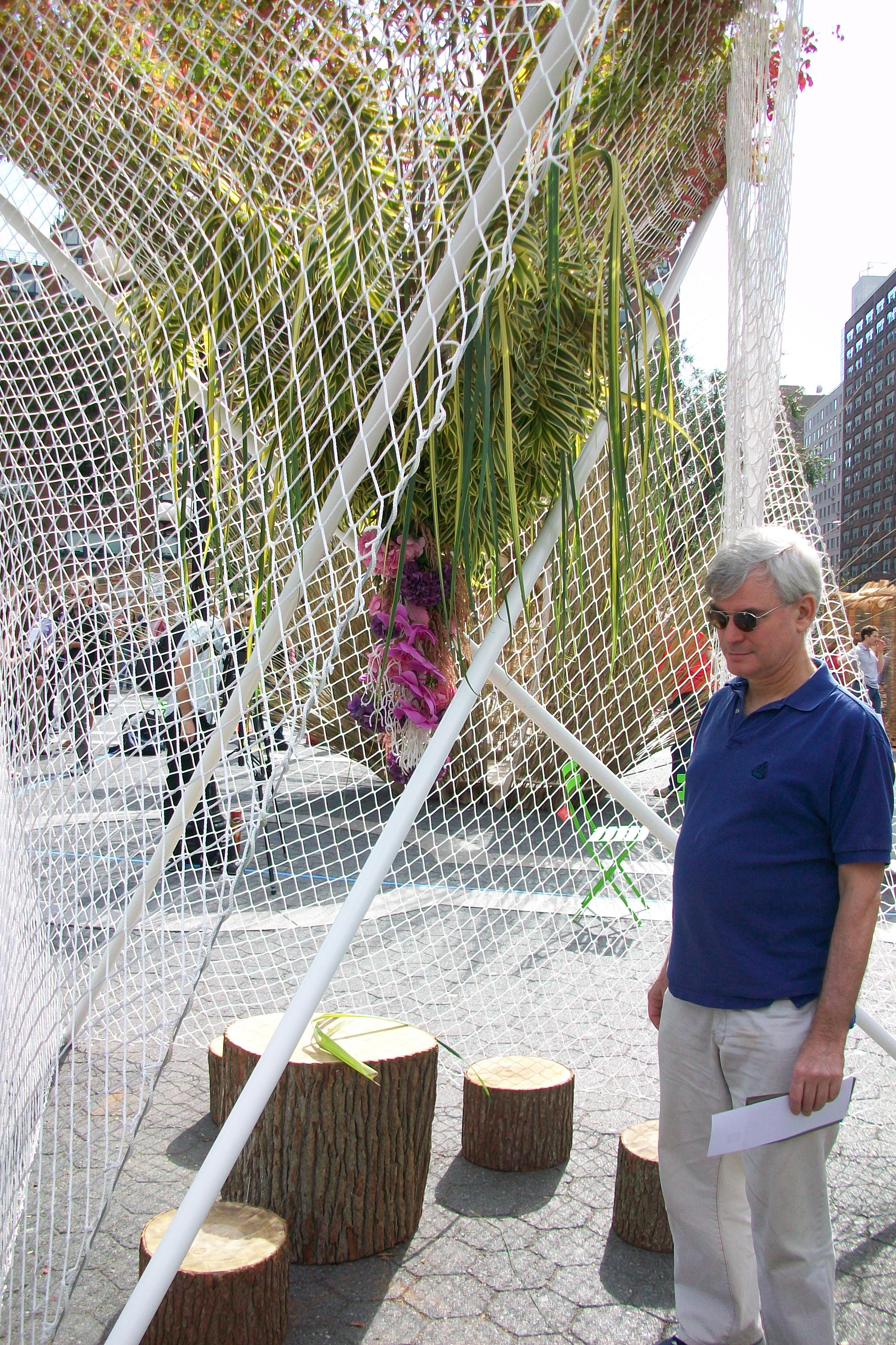 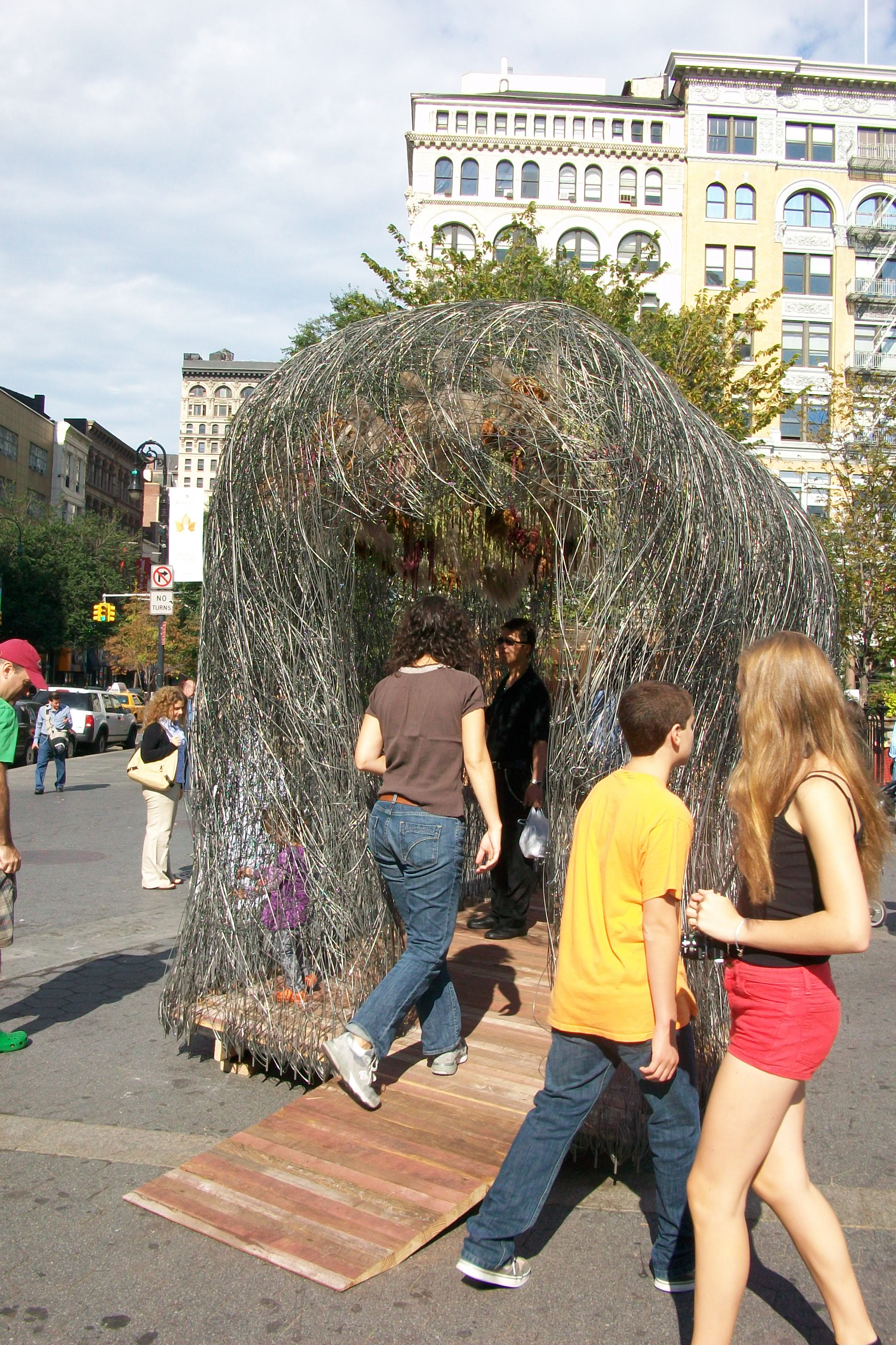 Two sukkahs incorporated herbaceous flowers.  Flowers hung from the ceiling of In Tension and Single Thread by Matter Practice of Brooklyn. 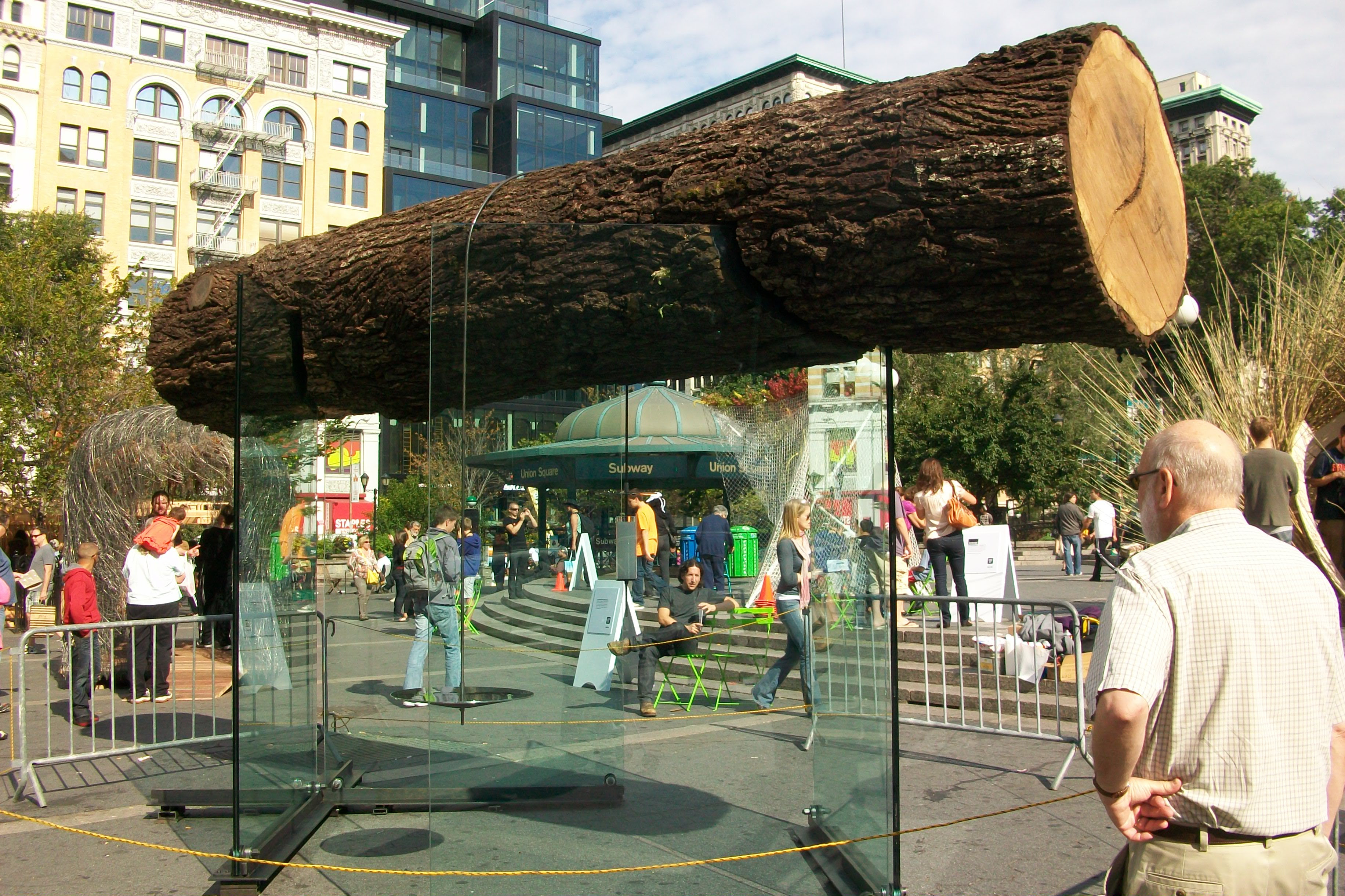 Based on viewers's reactions, the most impressive sukkah was Log by Kyle May and Scott Abrahams of Manhattan.  Unlike the other 11 sukkahs, access to this sukkah was limited to the designers and to a rabbi. We overheard one woman say to another:


Nothing hits the ground.  Everything is suspended from the log.  It's incredible! 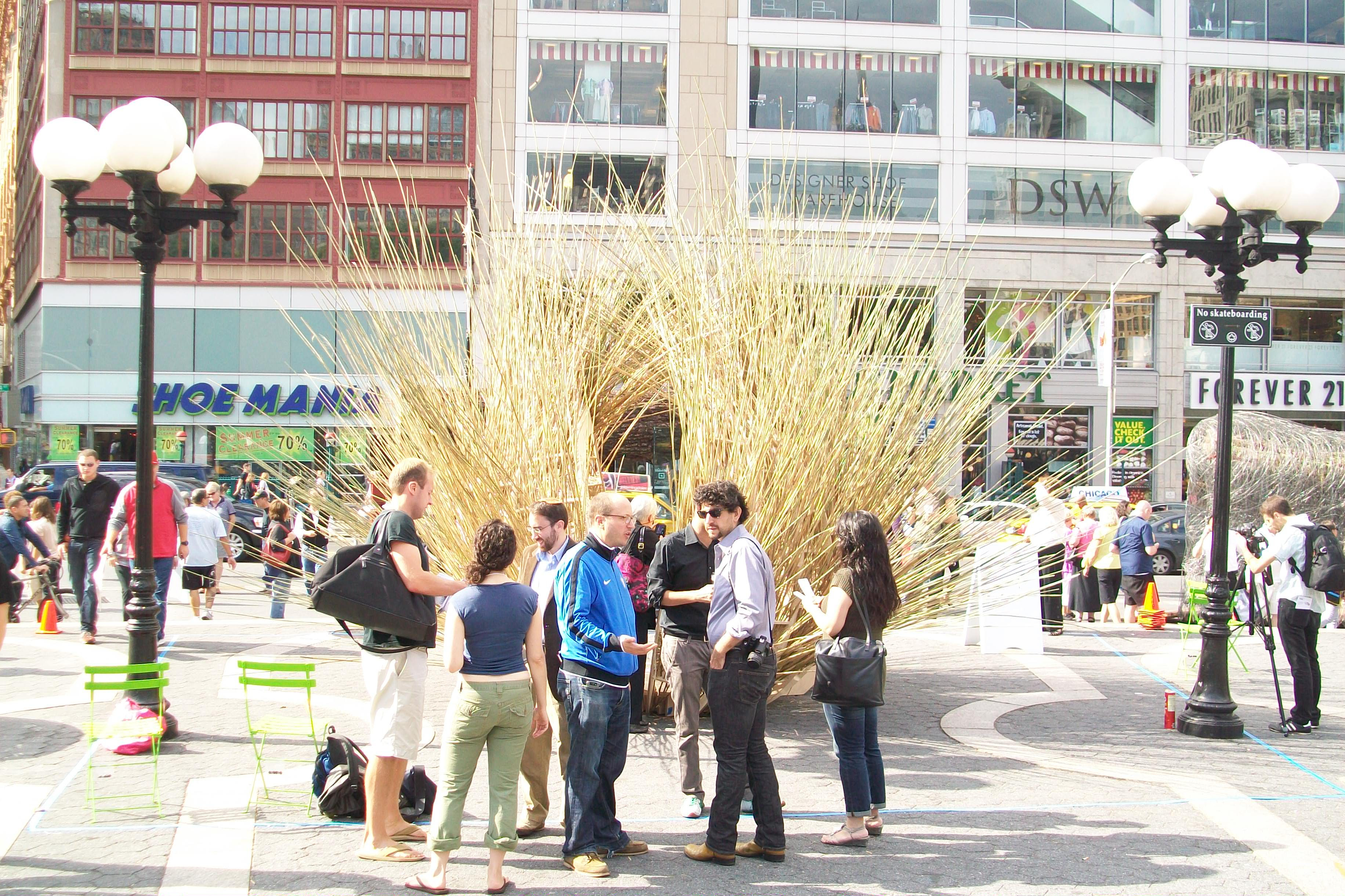 However, our second favorite, Fractured Bubble by Henry Grossman and Babak Bryan of Long Island City, won New York magazine's People's Choice contest and will be displayed in Union Square until October 2.  We like Fractured Bubble for its creative use of a declared invasive plant. The roof of this sukkah is composed of the perennial grass, Phragmites australis or common reed, which the designers harvested from Corona Park in Queens.  New York City Department of Parks & Recreation lists phragmites as "one of the 20 most invasive plants" in the state!  Read more about the grass here. 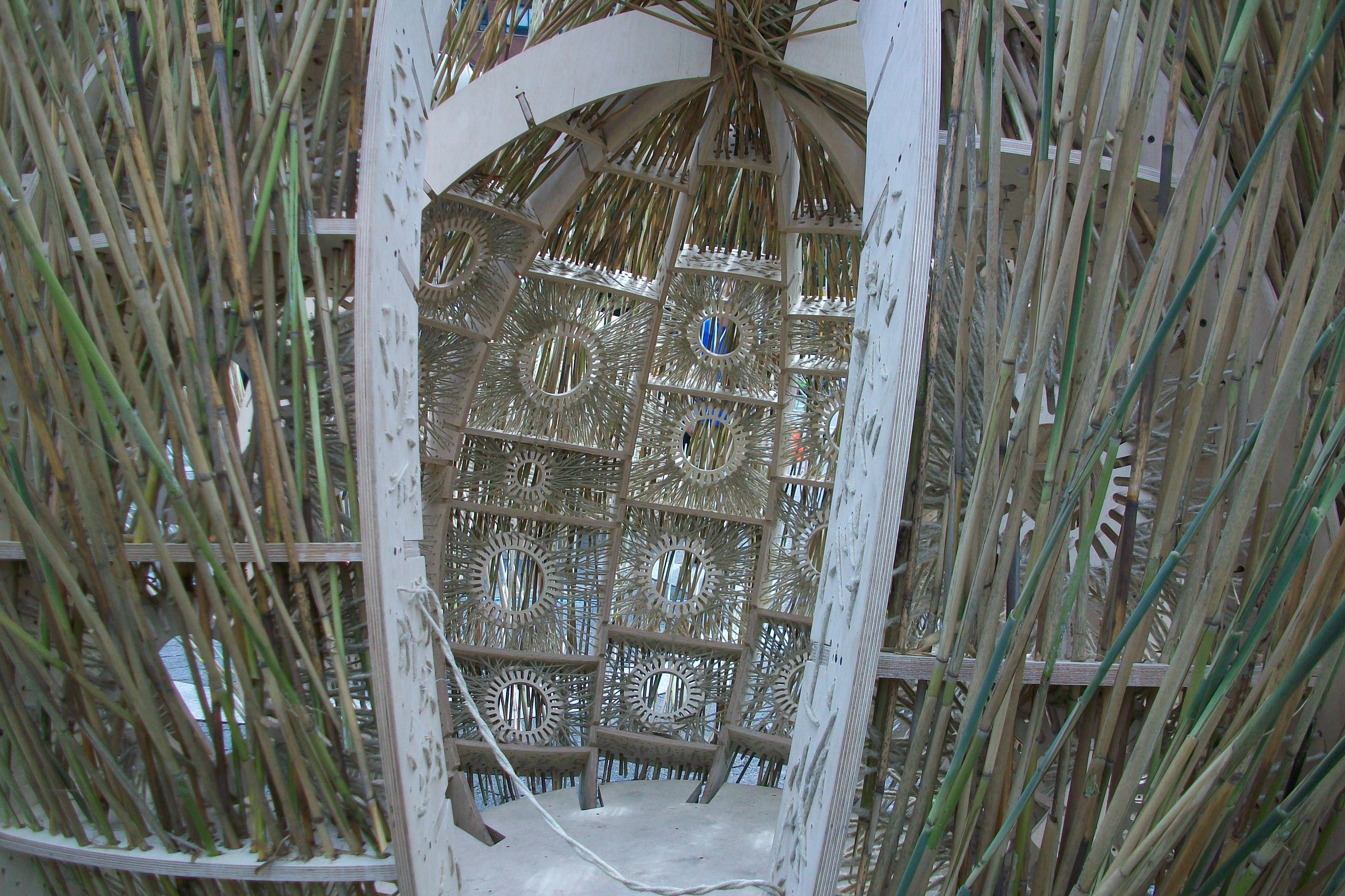 You can see selected sukkahs at the Center for Architecture on La Guardia Place from September 22 to October 30.