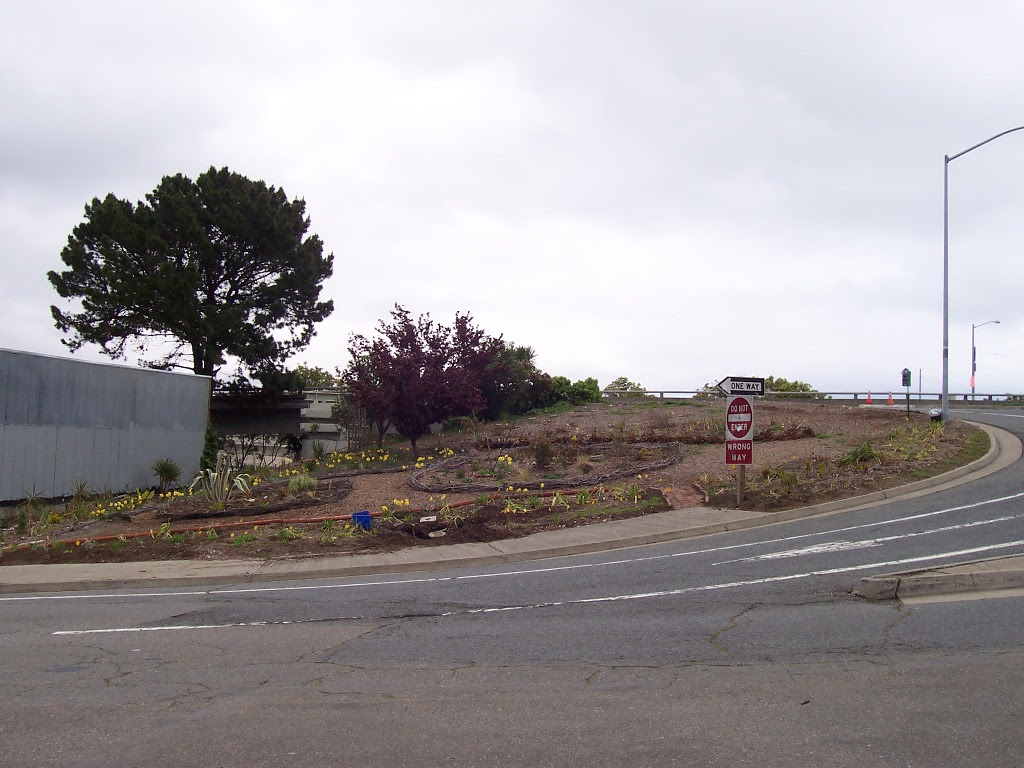 On an overcast morning in March 2009, we met with Annie Shaw, founder and head gardener of the Pennsylvania Garden at Pennsylvania Avenue and 18th Street in San Francisco's Potrero Hill neighborhood.  The garden is located on Caltrans (California Department of Transportation) land adjacent to the Mariposa Street off-ramp.  Grey though the day was, the garden provided small splashes of local color. 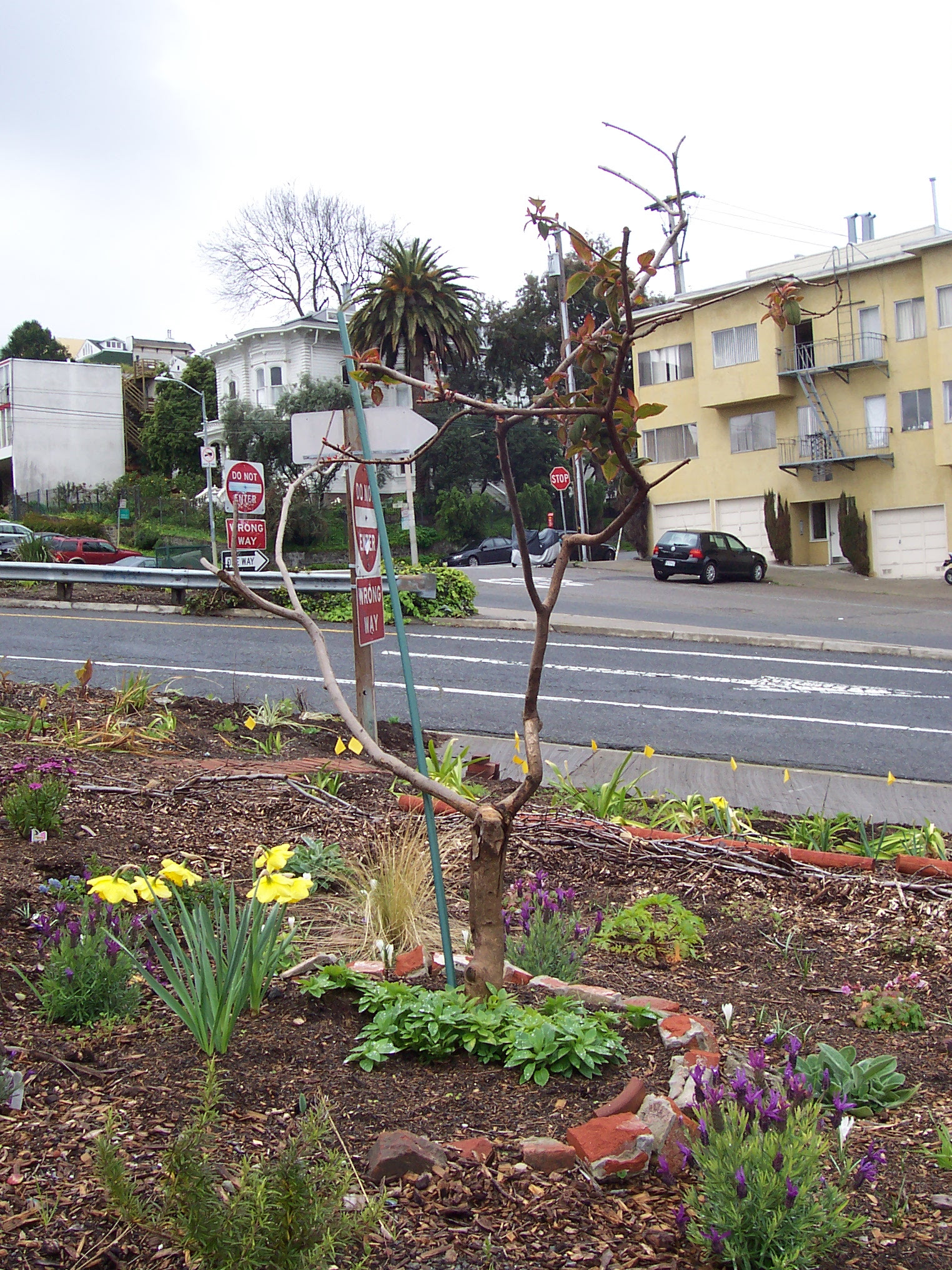 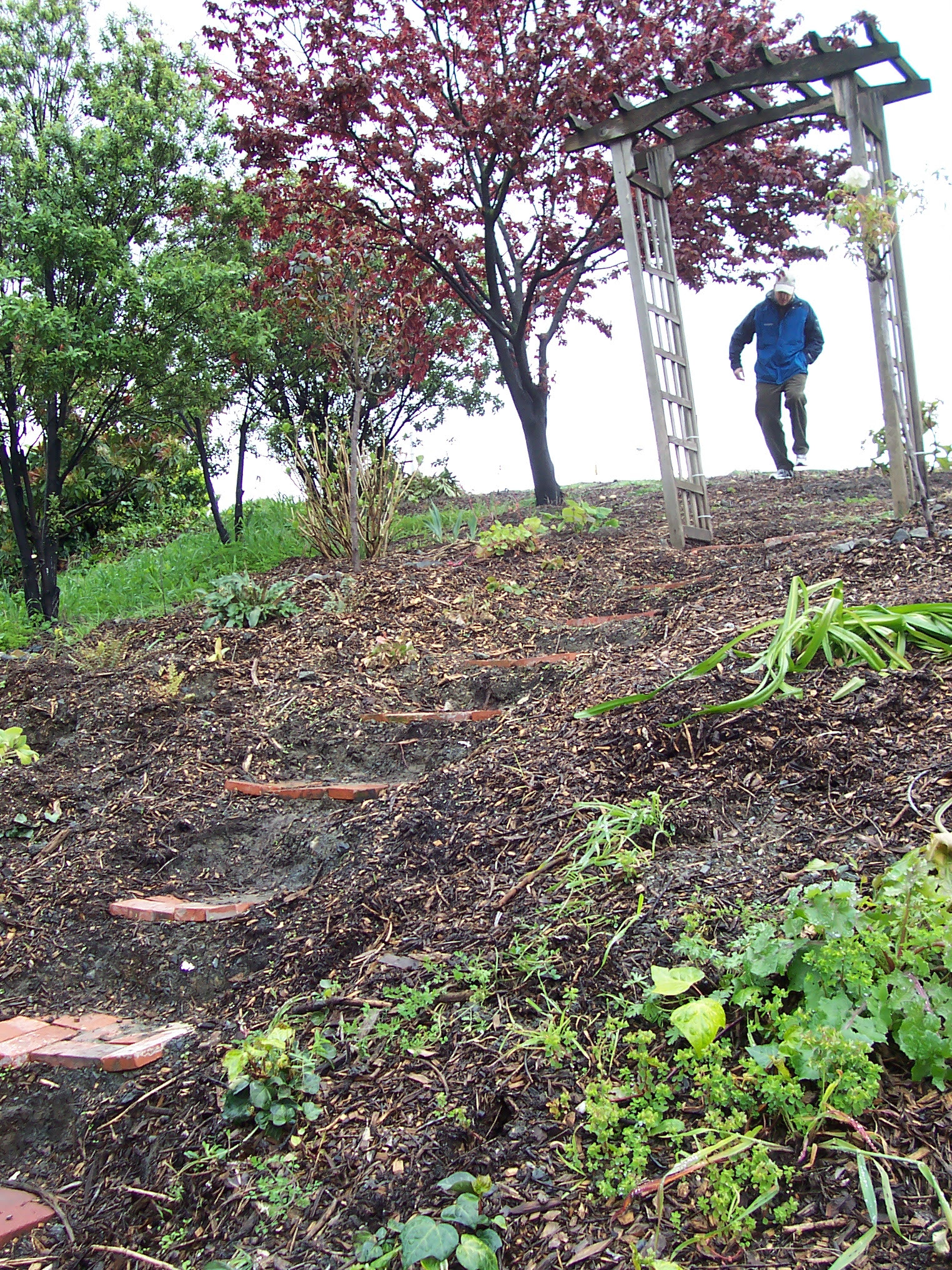 Wanting the garden to receive official recognition, Annie contacted Caltrans for permission. She was given permission to landscape but edibles and trees were not permitted. The former because of contaminated fill used in the 1970s as well as exhaust and runoff from the nearby off ramp. Trees are not permitted for safety reasons; they would interfere with sight lines. Since 2004, Caltrans has weeded and mulched the site after removing Monterey pines (Pinus radiata) that had succumbed to a beetle infestation, or it could have been infected by pine pitch canker. (Read more about the pine's "damaging agents"). Caltrans provided plan drawings of the site and will pay for irrigation with access on-site. The site had been used as an informal dog park and Annie wanted to maintain this use. She worked with dog owners to widen paths and to create a "dog only area" (see garden map). At the time of our visit, a neighbor had volunteered to make a map of the garden while another volunteered to install a second dog bag dispenser yet another, an arborist, volunteered to prune the trees, and a local iron worker volunteered to make an archway.  There is "a bit of everything for everybody" and Annie accepts all offers of volunteerism and encourages "ownership of plants [people] plant."  Volunteers are important to the success of this garden and Annie has written about "working magic" with volunteers for the Neighborhood Empowerment Network.

In terms of design with ecological intent, Ceanothus or California lilac, a popular bee species, has been planted and bees have been seen in the garden. Bumble bees "adore [Ceanothus 'Ray Hartman']," according to the University of California Urban Bee Gardens.  (The garden's blog has detailed plant profiles.)  With the establishment of the garden, Annie saw more birds such as hummingbirds.  (An adjacent building owner wanted to add a bird feeder.)  A recent Eaton and Sullivan article in the San Francisco Chronicle listed the wildlife seen at the garden: skippers, red admirals, an anise swallowtail, bumblebees, honeybees, and goldfinches.  How fitting that this nature-made site is off Mariposa Street; mariposa is the Spanish word for butterfly!